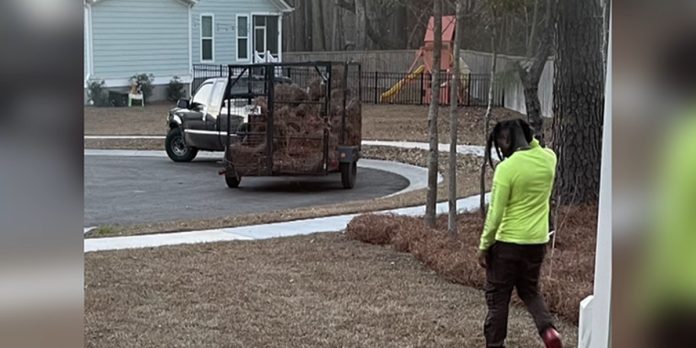 MOUNT PLEASANT, S.C. (WCSC) – With warmer weather just around the corner, a Lowcountry woman is warning people to remain cautious before accepting any offers for yard work.

Mount Pleasant resident Sheryl Frost says she was at home when a group of men in an unmarked car showed up to offer yard work.

“So, then I realized it was probably a scam,” Frost said.

She says she was fine with the agreement until things changed.

Frost says with the small area they filled with pine straw, there was no way they used 250 bales. She says she gave them $300 because that was the original agreement. She then says they got really aggressive.

“I said, ‘I’m going to call the police,’ and they couldn’t get to their cars fast enough,” Frost said.

Mount Pleasant Police Sgt. Ashley Croy says the elderly are one age group that could be more at risk of being taken advantage of. She says this is because some might assume they’re not thinking clearly.

Croy says they haven’t heard of any other reports similar to this. She says without knowing if there was criminal intent in this situation, Frost would have to file a civil suit. Croy does say it is odd the group left so quickly.

To avoid paying too much for services, Croy says it is important to check for a business license, a business card and do your own research on a company before they come on your property.

“I still felt like I didn’t want to be someone who’s taking advantage of someone else,” Frost said. “Even though they were trying to take advantage of me.”

Frost tells me the group of people didn’t have business cards on them, but that they were based out of Walterboro. The company they say they were with has not responded to a request for comment on whether they did business at Frost’s house.

EU to work with allies on possible Russia sanctions over Ukraine

News - December 16, 2021 0
EU leaders have agreed to co-ordinate with allies over potential sanctions against Russia in the event of an invasion of Ukraine, and charged the...

News - December 25, 2022 0
As the Arctic warms, concern for the plight of Santa’s favourite sleigh pullers is mounting. But in one small corner of the far flung...

News - May 2, 2022 0
Shanghai reports 58 new cases outside quarantine areasBeijing testing millionsOutbreak poses biggest test yet to Xi's "zero-COVID" strategySHANGHAI/BEIJING, May 2 (Reuters) - China's commercial...
© 2022 Venture Current is a Flag Media LLC Publication. All Rights Reserved.
VC is part of the FLAG Token rewards network. Clients and partners can use FLAG Tokens for VC products and services.
VC runs 'Automatic' software. Stories posted here come from generic-topic Google news RSS feeds as well as client and partner-approved content.
If a story appears on this page that needs to be deleted due to licensing issues, please message us immediately so we can help you.