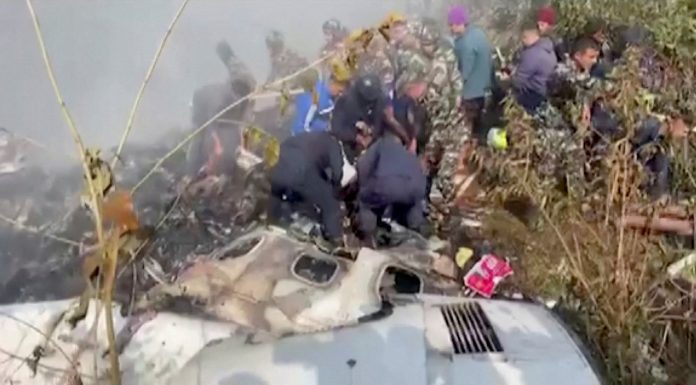 Bystanders filmed the aftermath of a plane crash that killed at least 68 people in Nepal on Sunday. (Reuters)

Searchers in Nepal recovered flight data and voice recordings Monday following a deadly plane crash that killed at least 68 of the 72 people believed to be on board.

The Yeti Airlines ATR 72 aircraft mysteriously plummeted into a river gorge during a routine 30-minute flight on Sunday. The plane’s manifest reported 72 people on board, including four crew members, but rescue workers have only so far recovered the remains of 68 people.

ATR 72 took off from the Nepali capital of Kathmandu at 10:32 a.m. local time and checked in again with flight controllers at 10:50. The plane is believed to have crashed soon after the check-in, and data from Monday’s recovered black boxes will shed light on the plane’s fate.

Nepali Prime Minister Pushpa Kamal Dahal declared a national day of mourning following the crash and created a panel to investigate the disaster.

Rescuers pull the body of a victim who died in a Yeti Airlines plane crash in Pokhara on January 16, 2023. – Nepal observed a day of mourning on January 16 for the victims of the nation’s deadliest aviation disaster in three decades, with 67 people c (Getty Images)

Family members and relatives of victims who died in a Yeti Airlines plane crash, weep outside a hospital in Pokhara on January 16, 2023. – Nepali rescue workers scoured a debris-strewn ravine on January 16 for more bodies from the mangled wreckage of (Getty Images)

“I saw the plane trembling, moving left and right, and then suddenly its nose dived and it went into the gorge,” one witness told Reuters of the crash.

The crash is Nepal’s worst aircraft disaster since 1992, when a plane carrying 167 people crashed near the capital, killing all on board.

Yeti Airlines ATR 72 aircraft at Pokhara Airport. The ATR 72-500 turboprop airplane has the registration 9N-AMM and is powered by 2x PWC engines. Yeti Airlines Pvt. Ltd. is an airline based in Kathmandu, Nepal, with an exclusive fleet of ATR, parent (Getty Images)

Nepal, home to eight of the world’s 14 highest mountains, including Mount Everest, has a history of air crashes. According to the Flight Safety Foundation’s Aviation Safety database, there have been 42 fatal plane crashes in Nepal since 1946.

Fox News’ Pilar Arias and Reuters contributed to this report.

News - November 21, 2022 0
The Grayscale Bitcoin Fund (GBTC) remains the largest legal bitcoin fund in the world with hundreds of thousands of BTC in holdings. However, given...

News - August 3, 2022 0
By Emily Bary 'Bottom line, these developments should address (at least for now) many investor concerns over execution and strategic...

News - September 26, 2021 0
The FORD Innovation Center in Israel has announced that it will support...

Ghislaine Maxwell declines to testify as her defence rests

News - December 17, 2021 0
Ghislaine Maxwell declined to testify on Friday as her lawyers wrapped up her defence on criminal sex trafficking charges after two days.“Your honour, the...

Harris in Singapore as U.S. tries to counter China’s influence

News - August 23, 2021 0
SINGAPORE—The White House on Monday announced a series of new agreements with Singapore aimed at combating cyberthreats, tackling climate change, addressing the COVID-19 pandemic...
© 2022 Venture Current is a Flag Media LLC Publication. All Rights Reserved.
VC is part of the FLAG Token rewards network. Clients and partners can use FLAG Tokens for VC products and services.
VC runs 'Automatic' software. Stories posted here come from generic-topic Google news RSS feeds as well as client and partner-approved content.
If a story appears on this page that needs to be deleted due to licensing issues, please message us immediately so we can help you.