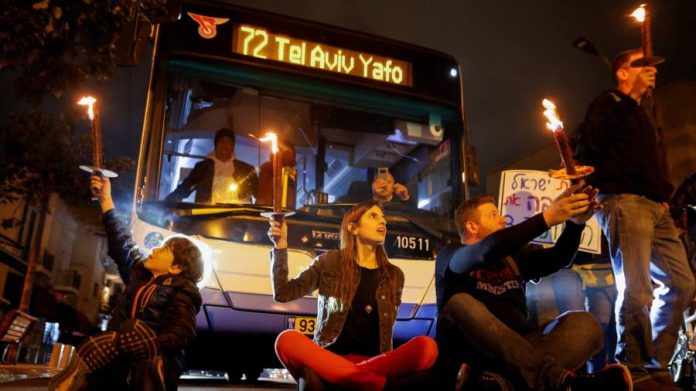 Israel’s prime minister Benjamin Netanyahu has hit back at criticism of his plans for a sweeping overhaul of the country’s judiciary, branding claims that it would spell the end of democracy as “without foundation”.

Thousands of people took to the streets in the liberal bastion of Tel Aviv on Saturday night to protest against Netanyahu’s new government — widely regarded as the most rightwing in Israeli history — which took office last month and has made reining in the judiciary one of its priorities.

At a cabinet meeting on Sunday, Netanyahu defended the plans, which were unveiled last week and would give the government and its allies control over the appointment of judges, and allow a simple majority in parliament to override decisions by Israel’s top court to strike down laws.

“We received a clear and strong mandate from the public to carry out what we promised during the elections and this is what we will do,” he said. “This is the implementation of the will of the voters, and this is the essence of democracy.”

Politicians from the extreme right and ultrareligious groups with whom Netanyahu has built his ruling coalition have long demanded an overhaul of the judiciary, arguing that it had gradually assumed powers it was never formerly granted, and used them to push a partisan, leftwing agenda.

However, critics of the government’s plans — which include the opposition, legal and judicial groups, and civil rights organisations — regard them as a brazen assault on Israel’s checks and balances.

In a series of television interviews broadcast on Saturday, Aharon Barak, who headed Israel’s Supreme Court from 1995 to 2006, likened the plans to the attacks on judicial independence carried out by authoritarian governments in Poland, Hungary and Turkey, and warned the proposed changes were “fertiliser that will lead to the growth of tyranny of the majority”.

The plan to weaken the powers of Israel’s top court has provoked particular criticism, since it is one of the main checks on Israeli governments. Parliament does not have a second chamber that can review or block legislation, the president has no veto powers, and Israel has no constitution.

In an interview with Channel 12 News, Barak said that if the top court’s power of judicial oversight was eroded, then there was a risk that citizens’ human rights would be imperilled, adding that the proposals overall amounted to “a clear and tangible danger to Israeli democracy”.

“If the Knesset passes a discriminatory, racist law . . . then you need to have someone with the power to say that you, the Knesset, have passed a racist law that contradicts the [principles of Israel’s] Declaration of Independence, which says there will be no racism,” he said.

The plans have also drawn fierce criticism from Gali Baharav-Miara, Israel’s attorney-general, who warned last month that if they were enacted, Israel would “be left with the principle of majority rule alone. That and nothing more, democracy in name only but not in substance.”

Netanyahu insisted that the proposed changes would be debated “seriously and in depth”, and that “all opinions — without exception — will be heard”.

Why lab-grown meat may never be on the menu

News - December 6, 2022 0
The writer is a science commentatorLaboratory-grown meat has come a long way since 2013, when Google co-founder Sergey Brin bankrolled the first burger made...

News - October 24, 2022 0
Gilts and sterling rallied on Monday following Boris Johnson’s exit from the race to become the UK’s next prime minister, as investors bet that...

News - July 28, 2022 0
A horrific video posted online on Thursday appears to show a Ukrainian prisoner of war being castrated by his Russian captors.While Yahoo News cannot...
© 2022 Venture Current is a Flag Media LLC Publication. All Rights Reserved.
VC is part of the FLAG Token rewards network. Clients and partners can use FLAG Tokens for VC products and services.
VC runs 'Automatic' software. Stories posted here come from generic-topic Google news RSS feeds as well as client and partner-approved content.
If a story appears on this page that needs to be deleted due to licensing issues, please message us immediately so we can help you.