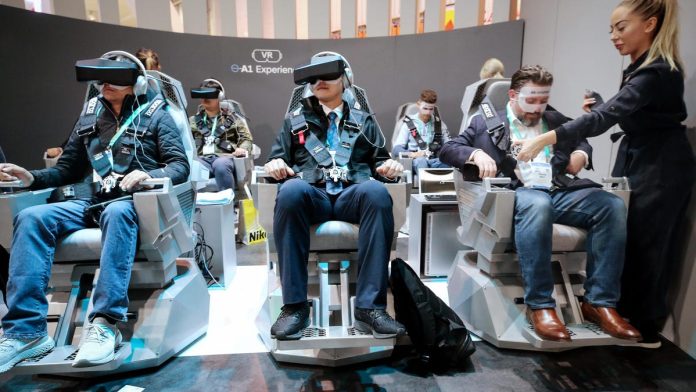 Tom Faber, who covers nightlife for the NY Times, spent some time finding community, and freedom, on the virtual dance floor in VR Chat. He says “there are dozens of parties happening on VRChat, a platform where users assume fantastical avatars of their own design.” The places he’s talking about are for PC powered VR on. Quest users have their own entertainment to look forward to as basketball great DJ Diesel (Shaquille O’Neil) hosts an hour-long event featuring performances by Cardi B, Ludacris, Lil Yachty, Killer Mike, and Whipped Cream. Shaq’s New Year’s Eve event will premiere Saturday, Dec. 31, at 3:30 p.m. PT, in VR in Meta Horizon Worlds and on Meta Quest TV, available in the Meta Quest 2 headset, as well as on O’Neal’s Facebook and Instagram pages and in Messenger’s Watch Together. Alspace is hosting a free all day/night rave.

CES, the world’s largest trade show, comes to Las Vegas January 4-7. AI is having a moment, and will no doubt be the star of this year’s show. Companies will go to great lengths to demonstrate how they are using AI to improve their products. From smart home devices to self-driving cars, AI has the potential to revolutionize the way we live and work, but no one knows how this will work, exactly. The show, virtual in 2021, Delta-diminished in 2022, will still not be back at its record setting 2020 size of 175,000. Organizers are expecting 100,000, which will still make it feel like a mob. While masking will not be required, given that Covid is spiking in Asia, only daredevils will walk the massive exhibition floors unmasked.

XR will be well represented at CES Forbes’ Andrew Williams says keep an eye out for the Sony’s Playstation VR2, HTC’s new standalone headset, teased last week, and Somnimum Space’s VR1. Both Microsoft and Magic Leap will have on hand in Central hall, along with Vrgineers, Xtal, Pimax and Vuzix. Cannon is introducing cinematic VR. We have private suite demos scheduled with Real Wear, Dimenco, Lumus, and Digilens. Meta is offering journalists private time with the Quest Pro and Ray Ban Stories. A new high definition headsets from Sharp is also expected.

I may have started a vexing trend by asking Is VR in a Perilous Place? after Meta admitted VR HMD sales were slowing. Thus began a trend of negative year end stories. Metaverse off to ominous start after VR headset sales shrank in 2022 says CNBC. 2023 Could be the Metaverse’s Make or Break Year added CNet. Meta, however, may yet have a hearty laugh this Christmas. On Dec 25th the Quest app was #1 in the App Store.

Daily Variety says Nreal AR Glasses Deliver on a Promise to Transform the On-the-Go Lifestyle The wearable second screen that tethers to lightweight glasses which reflect the smartphone’s screen as a massive 201” Micro-Led screen second screen for gaming and other content retails for $319. The Beijing-based augmented reality technology company isn’t exhibiting at CES this year. In 2020, they were the talk of the show.

This Week in XR is also a podcast hosted by the author of this column, Ted Schilowitz, and Rony Abovitz, founder of Magic Leap. This week we’re home for the holidays, so there’s no show, but give a listen to our 2022 round up and 2023 predictions with Venture Beat lead writer Dean Takahashi on December 16th. We’ll be back the first week in January from CES. We can be found on Spotify, iTunes, and YouTube.

The End of the Silicon Valley Myth The companies that define our digital lives have hit a wall.(Brian Merchant/The Atlantic)

This Week in Schadenfreude

News - September 24, 2022 0
This article is an onsite version of our Europe Express newsletter. Sign up here to get the newsletter sent straight to your inbox every...

News - July 26, 2022 0
Nvidia aims to take the pain out of machine-learning development this week with the latest release of its AI Enterprise suite, which includes a...

Zelensky Defines Courage in Our Time

News - June 26, 2022 0
Many publisher sales are taking place on the Switch eShop, including one from Spike Chunsoft – which includes the lowest prices ever for the...
© 2022 Venture Current is a Flag Media LLC Publication. All Rights Reserved.
VC is part of the FLAG Token rewards network. Clients and partners can use FLAG Tokens for VC products and services.
VC runs 'Automatic' software. Stories posted here come from generic-topic Google news RSS feeds as well as client and partner-approved content.
If a story appears on this page that needs to be deleted due to licensing issues, please message us immediately so we can help you.