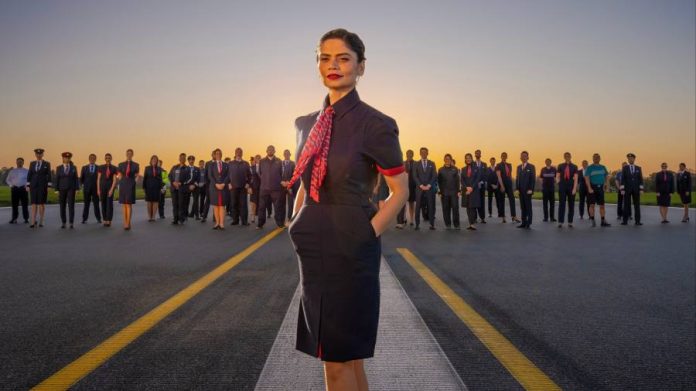 Of all the uniforms, none is more peculiar than the flight attendant’s swag. Part air police, part butler, the air steward must project calm authority and composure while also performing key manoeuvres such as serving 300 tikka masalas in high turbulence mid-air.

In the case of national airlines, the uniforms should also feature distinctions that tell you where they’re from. This is often reflected in some “local” detail: Emirates staff, for example, wear a red hat with an attached white scarf. In some instances, the airline adopts a more wholehearted approach to national costume, as seen in the sarong kebaya worn by the female staff of Singapore Airlines. Designed in 1968 by Pierre Balmain, the batik outfit embodies the figure of altitudinal servility still known cringingly as the “Singapore Girl”.

This week, following a long consultation with more than 1,500 colleagues, and 50 workshops, a new fleet of costumes for British Airways flight staff has been unveiled. The first upgrade in 20 years, the range has been designed by Savile Row tailor Ozwald Boateng to offer staff a broader range of choices. The men get to wear a waistcoat and choose from a slim or wider trouser fitting, while the female uniform incorporates a hijab option and, in addition to the traditional skirt or trousers, an all-action jumpsuit too. It’s all accessorised by scarlet details, the speedmarque logo has been incorporated in a jacquard, and a new airwave pattern is printed on a jaunty scarf.

Airline uniforms are a strange sartorial conundrum for modern designers, who must respond to competing interests and needs. The consultation process neuters much in the way of flair or fashion and the impetus is more on consolidation than it is on jazz. Things were simpler in the old days when hostesses were called “trolley dollies” and dressed to look like fetish dolls — the heyday of the hostess uniform coincided with that short moment in the late ’60s when teeny outfits that sexualised professional women could still be offered as “emancipated” style.

Those were the days when Southwest stewards wore micro hot pants, hipster belts and knee boots, it was the era of the Emilio Pucci-designed Braniff leotard. It was also a period of millinery experimentation when airline crew were expected to wear ridiculous hats: the Pucci rig-out included a orb-like bubble helmet, only slightly sillier than the bowler hat at Pan Am. They still look fabulous: icons of the “golden age” of travel, when everything was fancy and served up in the first-class lounge.

British Airways, as befitting a classic British institution, has always leant in to a stouter, stiffer, slightly pompous style. The first fashion designer to create a uniform for the British Overseas Airways Corporation was Maurice Helman, whose military-style skirt suit with big button details took its inspiration from the world of haute couture. Later outfits looked to fashion, nodding to the grey palette of Christian Dior.

In the early 1960s, the Queen’s dressmaker ​​Sir Norman Hartnell introduced a navy suit. He was followed a few years later by Sir Hardy Amies, who contributed the famous scarlet cape. As a relatively inclusive employer, the brand was quick to introduce kimonos and trousers; hoods were offered in the ’70s to the airline’s Pakistani crew. Julien Macdonald’s 2003 revamp tried to recapture a former glamour, but the airline has preferred to essay an air of no-nonsense capability than follow the caprices of modern style.

According to Boateng, the main considerations among flight staff were that the clothes withstand lots of different climates: uniforms were tested at temperatures of -18C. And with more than 90 per cent of the garments being produced with recycled polyester, the clothes are more sustainable — although I can’t imagine what they smell like after a quick turnaround on a long-haul flight.

In short, the new uniforms aren’t very sexy, but then neither is being an air steward in 2023: the basic pay for BA flight attendants is £18,169 per year.

British Airways is owned by the Anglo-Spanish conglomerate International Airlines Group, but it still clings to its illustrious history as a symbol of national pride. The uniforms are inclusive, practical, and manifest a can-do attitude. The jumpsuit says saucy, but no-nonsense: with its peppy scarf and pintuck gathers, there’s a distinct smack of Land Girl in the look.

And while I can’t imagine why anyone would ask for such short sleeves, or any circumstance in which a man would want to wear a waistcoat, 50 workshops say I’m wrong. To my mind waistcoats are less sleeves-up-and-get-the-job-done, and more football management or evening cabaret. Boateng’s BA wardrobe offers an interesting reflection of brand messaging in a post-Brexit world: an impression of fading glamour in a once popular UK holiday resort.

Why You (and I) Should Name a ‘Trusted Contact’ | Personal Finance

News - March 4, 2022 0
You aren’t required to name a trusted contact, but financial services companies — along with regulators and consumer advocates — recommend it. You can...

News - September 9, 2021 0
The folks over at Android Auto have announced that Google is finally set to investigate a spate of recent problems encountered by users of...

News - August 27, 2022 0
The treaty is reviewed every five years as part of an effort to reduce nuclear risks and stop the expansion of nuclear arsenals around...

News - December 14, 2021 0
GameStop  (GME) - Get GameStop Corp. Class A Report and AMC Entertainment  (AMC) - Get AMC Entertainment Holdings, Inc. Class A Report, two of the...
© 2022 Venture Current is a Flag Media LLC Publication. All Rights Reserved.
VC is part of the FLAG Token rewards network. Clients and partners can use FLAG Tokens for VC products and services.
VC runs 'Automatic' software. Stories posted here come from generic-topic Google news RSS feeds as well as client and partner-approved content.
If a story appears on this page that needs to be deleted due to licensing issues, please message us immediately so we can help you.