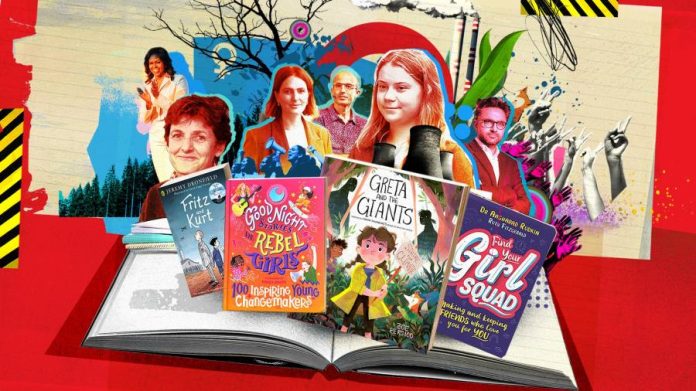 Children like facts. That is a fact. I’ve long realised that if mine tell me something about animals, however weird it is, they will usually be correct. When my seven-year old daughter told me the World Cup final lasted as long as a sperm whale could hold its breath, I didn’t argue (although I googled it, and it’s true).

For decades, the children’s non-fiction market sought to capitalise on this interest through core areas: dinosaurs, space and animals. The British publisher Usborne has long been a dominant player with titles such as The Usborne Book of Prehistoric Facts (1987) by Annabel Craig and The Solar System (2010) by Emily Bone.

But more recently, children’s non-fiction has been branching out. The past few years has seen a growing interest in diverse topics, from mental health to climate change, mirroring a similar trend in non-fiction for adults, according to Hazel Kenyon, a director of book research at Nielsen BookData.

In 2022, the market for children’s non-fiction hit a record high in the UK with revenues of nearly £60mn — a 17 per cent increase on the last “normal” year in 2019, figures from Nielsen BookData show. Just as adult non-fiction has broadened beyond autobiographies and popular science and history into narrative non-fiction, mindfulness and climate change, children’s books have followed suit.

Phoebe Jascourt, a commissioning editor at Penguin, says that 2016’s internationally best-selling Good Night stories for Rebel Girls by Elena Favilli and Francesca Cavallo, a collection of true stories of famous women throughout history, showed that children wanted to be part of bigger conversations that were happening around the world. Emma Dods, senior commissioning editor at Red Shed, the non-fiction imprint at Farshore, says a large part of the growth in children’s non-fiction in recent years has come from the increase in personal development titles.

Publishers are always looking for ways to capitalise on their back lists, and increasingly they have sought to cash in on this trend by repurposing well established or best-selling titles in the adult market for younger audiences. Often, these books are rewritten by the original author rather than a specialist children’s writer.

Unstoppable Us, a large, illustrated children’s version of Yuval Noah Harari’s Sapiens: A Brief History of Humankind (2011) was published simultaneously in the US, Canada and UK by various branches of Penguin Random House last year. In 2021, Michelle Obama’s memoir Becoming was adapted for younger readers. Already this year, a teen version of Elizabeth Day’s Failosophy, a book on how to deal with failure, has been published, and a kids’ version of Sathnam Sanghera’s best-selling book Empireland, a history of Britain’s often brutal relationship with its former colonies, will come out as Stolen History this summer.

But who benefits most from this trend?

A cynic might think that it is yet another way for publishing houses to squeeze more value out of an existing book, or for authors to hastily repackage pre-existing work. Name recognition certainly plays a role here: adults who enjoyed Sapiens are well primed to purchase Unstoppable Us for the kids in their life. In fact, the books usually involve a separate deal with the author, and present the author with new challenges.

“I thought it would be really easy to write a kids’ version but actually writing for kids is really hard,” says Sanghera. “[Stolen History] turned into a book in its own right.”

Fritz and Kurt, a retelling, with illustrations, of The Boy who Followed his Father into Auschwitz by Jeremy Dronfield, also ended up as a book with fresh material after the author discovered previously untold snippets of the family’s history while researching the version for younger readers — a harrowing but hard to put down tale.

Sanghera says he initially resisted the idea of a children’s version of Empireland. “I didn’t want to water down the reality of empire and violence is part of it.” But when Penguin proposed including some of the violence in a sensitive way, he agreed. The result has a conversational tone with humour that feels ideally pitched to the older children it is aimed at.

It is not always the case. One risk of adapting an adult text is that the voice may not be quite right for kids. Unstoppable Us, Harari’s adaptation of Sapiens for kids, is aimed at 10-14 year olds. But while the book has some illustrations, it also contains pages of dense writing that could put younger readers off while looking too childlike for an older audience.

Another risk is that the messaging may end up heavy handed. While children’s books often contain a strong sense of morality, the trick is to offer this up in a way that kids can relate to. They can spot a lesson a mile off. My own kids’ eyes glazed over when I read them Greta and the Giants, a retelling of Greta Thunberg’s climate fight. But when we read Isabella Tree’s When We Went Wild, a picture book based on her experience of rewilding her farm recounted in her adult book Wilding (2018), they asked to read it again — drawn in by the pictures of sad industrialised cows that Tree says she insisted on including.

Tree agrees there is “such a fine line” between being preachy and informative, but says that kids can also handle reality. “Farming is a messy, industrial business: there’s a mismatch between the lovely stories we like to tell children and the harsh realities,” she says.

Some publishers choose to become more involved with the editing process than they might have otherwise. Day says that Failosophy for Teens was “much more of a collaboration” with her editor than her previous books, while Sanghera says Puffin edited his book “much more than normal”. Others opt to pair an expert with a children’s author, as Hachette did with self-help book Find your Girl Squad by Dr Angharad Rudkin and Ruth Fitzgerald. “It’s really important that whoever’s writing can empathise with the child and see their point of view,” Fitzgerald says.

Katie Daynes, an in-house children’s author at Usborne, who has developed many bestsellers, says there is a danger that publishers who turn to well-known adult authors may shy away from editing them as heavily as they should for the children’s market: “The original author has to have the humility to be properly edited — so depending on who they are it might be better for them to give their approval to a children’s author.”

It remains to be seen whether this will provoke the sort of debate seen in the children’s fiction market, where — some argue — celebrity authors such as David Walliams tend to dominate sales at the expense of those for whom writing for children is their main profession. Summing up the mood after yet another celebrity book deal was announced last week, children’s author MG Leonard tweeted: “I can promise you your children will enjoy and learn more from my books than anything written by Geri Halliwell or Peter Andre. I have dedicated my life to creating stories for children. It is my vocation.”

Some argue that anything that makes children’s non-fiction titles more mainstream and diverse is a good thing. Molly Ker Hawn, a children’s literary agent, says that the non-fiction market for kids in the UK is relatively small and under-developed compared to that of the US, where libraries are still big buyers of non-fiction and wield more power.

Piers Torday, an award-winning children’s fiction author, says that while celebrities getting fiction book deals “belittles the children’s market”, non-fiction is an area where it does make sense to hear from an expert, even if they’re unfamiliar with writing for kids. “There’s an element of reheating so you can never get full marks for originality, but I don’t think there’s anything cynical about it,” he says.

If the result of publishers seeking to capitalise on a trend for more diverse non-fiction is fresh books addressing topics that go beyond dinosaurs and astronauts, kids should be the winners. Just choose your books with care.

Alice Ross is an FT contributor

Join our online book group on Facebook at FTBooksCafe

News - May 16, 2022 0
A man stands on an overpass with an electronic board showing Shanghai and Shenzhen stock indexes, at the Lujiazui financial district in Shanghai, China...

Nothing Phone (1) scored as the least repairable phone of 2022 after teardown –...

News - November 8, 2022 0
The Nothing Phone (1) has been awarded the title of the least repairable phone of 2022. This comes after a teardown of the quasi-transparent...

News - March 20, 2022 0
For marginalized groups like women and people of color, achieving career success can be much harder than it is for others. Representation in the...

News - December 21, 2022 0
It is now two years since the UK signed its post-Brexit trade deal with the EU, but for small businesses such as Doncaster-based Apothecary-87,...
© 2022 Venture Current is a Flag Media LLC Publication. All Rights Reserved.
VC is part of the FLAG Token rewards network. Clients and partners can use FLAG Tokens for VC products and services.
VC runs 'Automatic' software. Stories posted here come from generic-topic Google news RSS feeds as well as client and partner-approved content.
If a story appears on this page that needs to be deleted due to licensing issues, please message us immediately so we can help you.