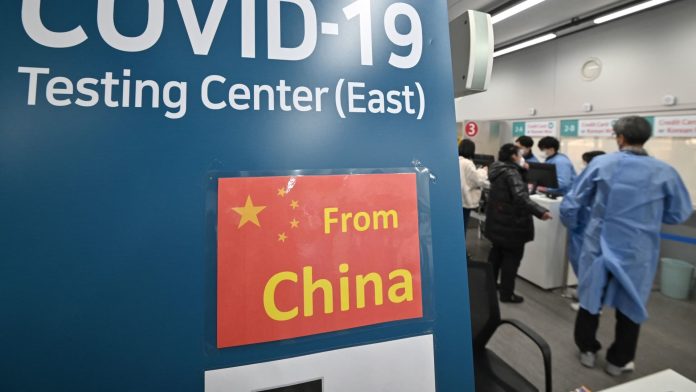 South Korea on Tuesday hit back at claims that its Covid rules for Chinese travelers are “discriminatory,” saying more than half of its imported cases are coming from China.

In a response to CNBC, Seung-ho Choi, a deputy director at the Korea Disease Control and Prevention Agency said that up to 80% of “imported confirmed cases” in South Korea are coming from China.

Choi said the number of people traveling from China who tested positive for Covid-19 went up 14 times from November to December.

Choi also said that its policies cover “all Korean nationals and non-Korean nationals coming from China. This is not confined only to Chinese people. There is no discrimination for nationality in this measure.”

Citing South Korea’s proximity to China, Choi said a surge in infections in China could put South Korea at risk.

“China’s COVID-19 situation is still worsening …which has created the possibility of new variants to be detected,” he said.

The omicron variant swept China in December, after authorities relaxed stringent contact tracing requirements that had forced many people to stay close to their homes for nearly three years. As of Jan. 8, Beijing formally relaxed its international border controls, opening the door to more travel in and out of the country.

It’s unlikely that a dangerous new Covid variant is spreading in China, Dr. Chris Murray, Seattle-based director of a health research center at the University of Washington, told CNBC in late December.

But South Korea and Japan — two top destinations for Chinese travelers — said they are not increasing flights in response to China’s border reopening. South Korea also announced plans to limit short-term visas to travelers from China.

China’s embassies in South Korea and Japan announced Tuesday that they would stop issuing visas to “Korean nationals” and “Japanese citizens.”

The announcement by the Chinese Embassy in Korea said the rule would apply to visas for tourism, business and medical reasons, and that it was “following China’s domestic guidelines,” according to a CNBC translation.

U.S. State Department spokesperson Ned Price said at a press briefing Wednesday that the United States is requiring that travelers from China take pre-departure tests because of the “spread” and “prevalence” of infections in China, “but also because of the lack of adequate and transparent epidemiological and viral genomic sequence data being reported from the PRC.”

“It’s the lack of transparency that has compounded our concern for the potential for a variant to emerge in the PRC and potentially to spread well beyond its borders,” he said.

As a responsible member of the international community, we will share with the world the Covid-19 data that we are analyzing.

Yet a Shanghai-based finance professional, who asked that we refer to him as Derek, called South Korea’s restrictions “very fair.”

“None of my friends would go on a flight filled with Covid positive people,” he said.

Chinese citizen Cheryl Yang said for many in China, travel is the least of their concerns.

“Many people I know have been sick or [are] sick, and a lot of kids are off school,” she said. “Travel would be a secondary problem at the moment.”

Choi said South Korea’s new Covid travel restrictions are “only temporary” and were made to “place the highest priority on the health and safety of people residing in South Korea.”

The surge of Covid infections sweeping across China may mean the country can quickly move past the outbreaks, allowing the economy to rebound quickly — some say, as early as the second quarter of 2023.

Noting that China’s reopening is progressing faster than most expected, a report by HSBC Global Research published Jan. 5. stated that “China will emerge from Covid-19 and rebound strongly from 2Q23.”

In the meantime, Choi said, “We will make the utmost effort to help the world overcome the pandemic.”

“As a responsible member of the international community, we will share with the world the Covid-19 data that we are analyzing,” he said.

News - November 8, 2021 0
Positive market momentum during Monday morning’s Asian trading session has resulted in a 3.1% gain for the total crypto market capitalization. According to analytics website...

News - August 29, 2022 0
Goldman Sachs Group Inc. said markets are still pricing in a 50% chance of Chinese companies being delisted from US exchanges, even as the...

News - June 7, 2022 0
You’ve heard all about the new features coming to Macs with macOS Ventura later this year. No doubt you are now wondering if your...

Is the social media bubble about to burst?

News - November 8, 2022 0
I see Meta is planning large scale layoffs for thousands of workers following a hiring freeze and a share price fall of 70 percent...

Truss under renewed pressure to outline cost of living support

News - August 28, 2022 0
Tory leadership frontrunner Liz Truss on Sunday faced renewed pressure to outline her plans to tackle the cost of living crisis, as MPs called...
© 2022 Venture Current is a Flag Media LLC Publication. All Rights Reserved.
VC is part of the FLAG Token rewards network. Clients and partners can use FLAG Tokens for VC products and services.
VC runs 'Automatic' software. Stories posted here come from generic-topic Google news RSS feeds as well as client and partner-approved content.
If a story appears on this page that needs to be deleted due to licensing issues, please message us immediately so we can help you.