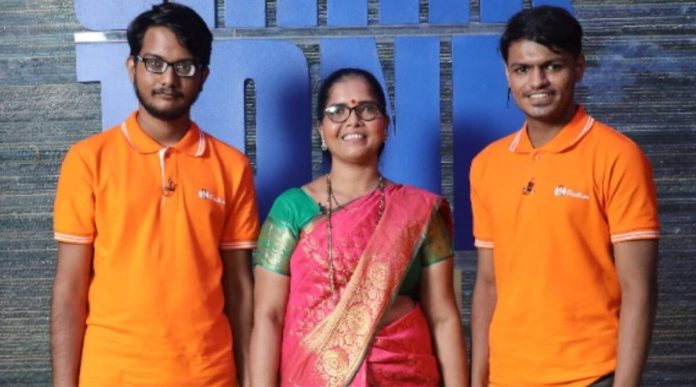 The team behind homemade snacks business Patil Kaki recently appeared on Shark Tank India Season 2. In the episode, Geeta Patil, the founder, revealed to the ‘sharks’ that she had started her business in 2017 with just Rs 5,000, and over the years, has made it into a Rs 3 crore business. She was joined on the show by her son Vinit Patil and Darshil Anil Savla, who are not just her partners but also gave her wings by launching a website for her. The pitch ended with Peyush Bansal and Anupam Mittal investing Rs 40 lakh for 4% equity in Patil Kaki.

Speaking exclusively to indianexpress.com about her experience, Geeta said that she never imagined the kind of love and respect she has been garnering post the show. Her 21-year-old son Vinit also pitched in to say that his mother has become popular and people are stopping her for selfies everywhere she goes. He added that the fame is not in terms of social media virality but actual visits to their platform. “Our website crashed after the episode and that proves that people wanted to try out our products,” he shared.

While Geeta Patil has been selling snacks from home, it was the pandemic that gave her a reason to expand the business. Her son said that as he was also working from home, she asked him to help her take her business online. Given the lockdown, the sales had been affected and she was craving to do something different. Stating that they never expected it to blow up to this level, the proud businesswoman said, “The business helped me run my home. My husband wasn’t doing well and the business was our major source of income. I was also getting bored sitting at home doing nothing during the pandemic. That’s when I decided to take things in my stride. Since we were all buying groceries online, I asked Vinit why can’t we sell our snacks online too. That’s how it all began for us.”

Talking about registering for Shark Tank India Season 2, Vinit Patil said that it was always a dream to present in front of the panel of ‘sharks’. However, he did add that their hopes weren’t ‘too high’ when they had filled out the form. “As and when we crossed the next level, things became more exciting for us. Initially, we never expected to reach the final stage, leave aside returning with funding.” As for picking Peyush Bansal and Anupam Mittal, Vinit had logical reasoning for it. He also shared that he wanted all four ‘sharks’ to invest in them, and was disappointed that Aman Gupta did not come along eventually.

“As for Anupam, his audience is something that’s similar to our TG also. It made more sense to have him as he has a better understanding of the audience. Peyush, on the other hand, holds expertise in manufacturing. If we are not able to produce at the right cost, it’s a failure. Hence that was the reason we chose them as our investors,” he shared.

Given the ‘sharks’ had lauded the 21-year-olds for their business acumen, we asked Vinit if entrepreneurship was always the plan. With a broad smile, he said that both he and good friend Darshil “want to achieve something in life”. He also shared Patil Kaki is their third business idea. “We earned money in our first outing, lost on the second and this is doing fairly well. We are working on building a Rs 100 crore company someday. Also, after a point money doesn’t matter. The intention is to earn enough to be able to pump it back into the economy to help the country grow,” he said.

News - August 26, 2022 0
Tesla revealed more information about the company's Dojo microarchitecture at this year's Hot Chips 34. The company hopes to create an AI supercomputer to...

Xpeng Officially Presents the P5, the World's First EV With a LiDAR

News - September 16, 2021 0
In June, Volvo announced the XC90 successor – now with a proper name – would be the first production vehicle ever to present a...

Why Tesla Stock Jumped on Wednesday

News - April 19, 2022 0
A European official said Tuesday that Russia will control the Ukrainian city of Mariupol within days and warned the atrocities will far exceed what...

News - September 26, 2021 0
Deathloop's voice actor for Colt mentions he isn't able to play due to not having a PlayStation 5, but Bethesda comes in for the...
© 2022 Venture Current is a Flag Media LLC Publication. All Rights Reserved.
VC is part of the FLAG Token rewards network. Clients and partners can use FLAG Tokens for VC products and services.
VC runs 'Automatic' software. Stories posted here come from generic-topic Google news RSS feeds as well as client and partner-approved content.
If a story appears on this page that needs to be deleted due to licensing issues, please message us immediately so we can help you.