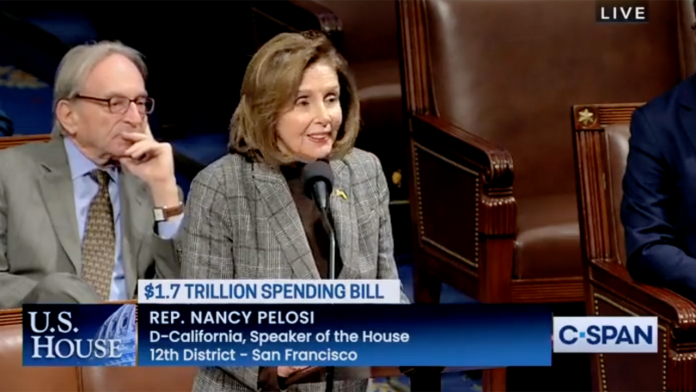 Twitter grilled Speaker of the House Nancy Pelosi, D-Calif., on Friday for wishing people a “Happy Shwanza,” instead of “Kwanzaa” during remarks closing out the House’s vote on the “omnibus” spending bill.

After the 4,155-page, $1.7 trillion bill passed in the House of Representatives Friday, Pelosi decided to close out the session of Congress by wishing happy holidays to several different groups celebrating this time of year, including one that doesn’t exist.

In her sign off – which she claimed “will probably be my last speech as Speaker of the House” – Pelosi said, “I yield back the balance of my time and wish everyone a happy, healthy and safe New Year. Happy Holidays. Merry Christmas. Happy Shwanza. Happy Hanukah.”

Making sure she respected all the major holidays this season, she added, “Whatever it is you celebrate, be safe! Thank you, Mr. Speaker.” Though several Twitter users fixated on “Shwanza” and ridiculed the Democratic Party leader for it.

Conservative digital strategist Greg Price shared the 17 second clip to Twitter, tweeting, “Pelosi ends her final speech as Speaker of the House by wishing everyone a Merry Christmas, Happy Hannukah and a ‘Happy Shwanza.’”

Price then updated a classic Christmas line to reflect Pelosi’s gaffe. “Happy Shwanza to all and to all a good night,” he tweeted.

Speaker of the House Nancy Pelosi, D-Calif., is joined by her husband Paul Pelosi as they attend her portrait unveiling ceremony in Statuary Hall at the Capitol in Washington, Wednesday, Dec. 14, 2022.
(AP Photo/J. Scott Applewhite)

“The Political Insider” columnist Rusty Weiss tweeted, “OMG. ‘Happy Shwanza.’ If Trump ever said that it’d be on a 24/7 news cycle with rioting in the streets.”

Conservative news publisher The Truth Gazette wrote, “In her last speech as Speaker, Crazy Nancy wishes you a ‘Happy Shwanza.’”

Author, filmmaker and U.S. Air Force veteran Shane Smedley indicated “Shwanza” made him think of something else. “Shawarma?” he asked.

Speaker of the House Nancy Pelosi, D-Calif., seated at left, is joined by her husband Paul Pelosi as they listen to praise from former Republican Speaker John Boehner, right, during her portrait unveiling ceremony in Statuary Hall at the Capitol in Washington, Wednesday, Dec. 14, 2022.
(AP Photo/J. Scott Applewhite)

Gabriel Hays is an associate editor for Fox News Digital.

Apple is planning to launch the largest MacBook Air ever at its spring 2023...

News - December 15, 2022 0
We’ve been hearing rumors about a new, larger MacBook Air for a while now, but according to a new report from an accurate source,...

UBS Warns of Crypto Winter Amid Expectation of Fed Rate Hikes and Regulation –...

News - January 24, 2022 0
UBS, Switzerland’s largest bank, has warned about a crypto winter where prices crash and may not recover for years. The bank’s analysts explained several...

Rates raised by three-quarters of a percentage point

News - September 21, 2022 0
The Federal Reserve on Wednesday raised benchmark interest rates by another three-quarters of a percentage point and indicated it will keep hiking well above...

News - March 29, 2022 0
COPENHAGEN, Denmark -- Ukrainian President Volodymyr Zelenskyy says seven people were killed in a missile strike on the regional government headquarters in the southern...
© 2022 Venture Current is a Flag Media LLC Publication. All Rights Reserved.
VC is part of the FLAG Token rewards network. Clients and partners can use FLAG Tokens for VC products and services.
VC runs 'Automatic' software. Stories posted here come from generic-topic Google news RSS feeds as well as client and partner-approved content.
If a story appears on this page that needs to be deleted due to licensing issues, please message us immediately so we can help you.