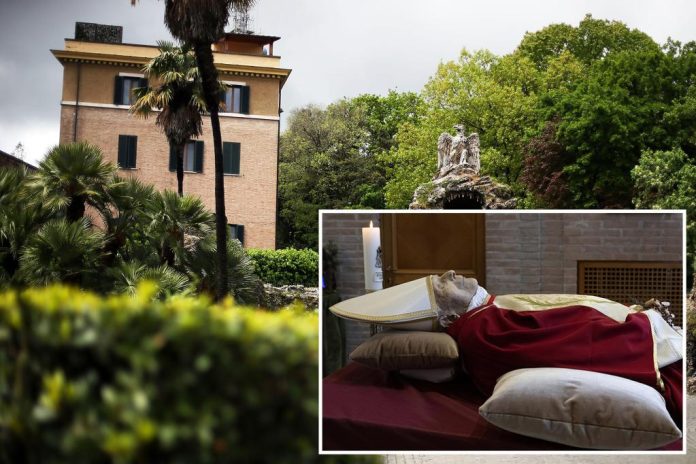 Pope Emeritus Benedict XVI’s last words before he died Saturday were, “Lord, I love you,” according to his longtime secretary.

Archbishop Georg Gaenswein quoted a nurse who was helping the 95-year-old and heard the words shortly before his death on New Year’s Eve.

The nurse recalled Benedict making the short statement at about 3 a.m. before he died later that morning, Gaenswein said.

“Benedict XVI, with a faint voice but in a very distinct way, said in Italian, ‘Lord, I love you,’” Gaenswein told the Vatican’s official media Sunday.

“I wasn’t there in that moment, but the nurse a little later recounted it.

“They were his last comprehensible words, because afterwards, he wasn’t able to express himself any more.”

Gaenswin, a German prelate, lived in the Vatican monastery where Benedict resided after he retired from the post in 2013.

The Vatican reported that Pope Francis paid his respects right after Gaenswein called to inform him that Benedict had died a little after 9:30 a.m.

Francis prayed for Benedict’s passage to heaven and expressed appreciation for his service as head of the Catholic Church that lasted eight years.

“Today we entrust to our Blessed Mother our beloved Pope Emeritus Benedict XVI, so that she may accompany him in his passage from this world to God,” he said.

Benedict’s coffin will be viewed for three days starting Monday with no fewer than 25,000 to 30,000 mourners expected that day, said Rome Prefect Bruno Frattasi, an Interior Ministry official to Italian state television.

His body lay on a burgundy-colored bier in the chapel of the monastery where he lived in retirement.

Ukraine Says Russia Is Using Inflatable Tanks, but They Deflated

News - May 29, 2022 0
US stock markets finally ended a seven-week losing streak, with all three US benchmarks delivering a positive finish on Friday. Source

News - December 15, 2021 0
Blinken will no longer have scheduled meetings and events in Thailand, which were supposed to begin on Thursday morning, and instead will make his...

News - September 5, 2021 0
The S&P 500 and Nasdaq held near records to end the week despite a disappointing jobs report.Both those indices reached all-time highs on Thursday...

News - October 13, 2021 0
Stocks wavered Wednesday after a stronger-than-expected inflation reading boosted fears of an interest rate hike by the Federal Reserve.Here are some of the biggest...
© 2022 Venture Current is a Flag Media LLC Publication. All Rights Reserved.
VC is part of the FLAG Token rewards network. Clients and partners can use FLAG Tokens for VC products and services.
VC runs 'Automatic' software. Stories posted here come from generic-topic Google news RSS feeds as well as client and partner-approved content.
If a story appears on this page that needs to be deleted due to licensing issues, please message us immediately so we can help you.