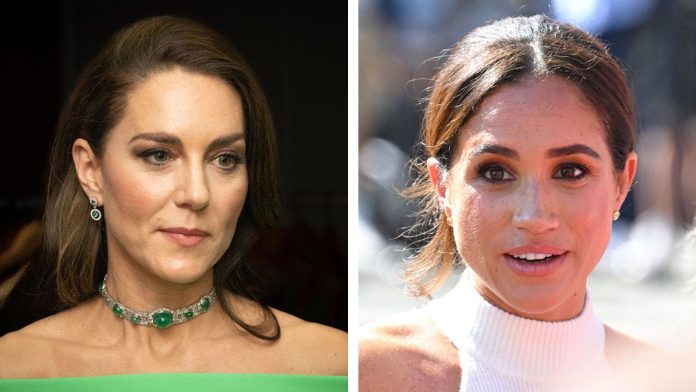 Prince Harry revealed in his highly-anticipated memoir “Spare” that his wife Meghan Markle misled viewers of their 2021 Oprah Winfrey television special about the cause of her falling-out with Kate Middleton.

While the 41-year-old former “Suits” actress claimed that Middleton, 40, was to blame for their spat over flower girl dresses ahead of Sussexes’ May 2018 wedding, the 38-year-old Duke of Sussex wrote that his sister-in-law also became upset over a comment made by Markle.

In his memoir, Harry recalled that the Princess of Wales was offended when Markle told her she “must have baby brain because of her hormones,” according to Page Six.

Baby brain is a term that “refers to memory problems, poor concentration and absent-mindedness reported by many women during pregnancy and early motherhood,” per the Mayo Clinic.

PRINCE HARRY STATES HE WANTS HIS FATHER AND BROTHER ‘BACK,’ ALLEGES PLANTING OF STORIES IN UPCOMING INTERVIEWS

Middleton had given birth to her third child, Prince Louis, one month ahead of Harry and Markle’s nuptials at St. George’s Chapel in London.

During the Sussexes’ sit-down with Winfrey, 68, Markle made no mention of the “baby brain” remark. However, she did address rumors that she had made Middleton cry before the wedding.

“The narrative with Kate, which didn’t happen, was really, really difficult and something that I think, that’s when everything changed, really,” Markle said at the time.

Markle told Winfrey that “the reverse happened.” “That was a turning point,” Markle admitted.

Markle alleged that the narrative that the two had a longstanding feud stemming from Middleton crying at the wedding simply “didn’t happen.” Instead, Markle explained that a few days before the wedding, Middleton was upset about the flower girl dress that her daughter, Princess Charlotte, was meant to wear.

“It made me cry and it really hurt my feelings,” Markle explained. “And I thought in the context of everything else that was going on in those days leading to the wedding that it didn’t make sense to not be just doing whatever everyone else was doing, which was trying to be supportive.”

However, Markle noted that the alleged feud that made for such media fodder ended almost as quickly as it began thanks to an apology from Middleton.

“It was a really hard week of the wedding,” Markle explained. “And she was upset about something, but she owned it, and she apologized. And she brought me flowers and a note, apologizing. And she did what I would do if I knew that I hurt someone, right, to just take accountability for it.”

Harry and Markle gave a tell-all interview to Oprah Winfrey in 2021.
(Chris Jackson)

Markle later explained that it was difficult for her to get over being portrayed as the instigator of their feud.

“What was hard to get over was being blamed for something that not only I didn’t do but that happened to me,” Markle later told Winfrey. “Everyone in the institution knew it wasn’t true…. I’m not sharing that piece about Kate in any way to be disparaging to her. I think it’s really important for people to understand the truth. … She’s a good person.”

She added, “And I think so much of what I have seen play out is this idea of polarity, where if you love me, you don’t have to hate her. And if you love her, you don’t need to hate me.”

However, Harry wrote in “Spare” that while the initial spat was over flower girl dresses, Markle’s comment added fuel to the fire.

The Duke of Sussex wrote that in the lead-up to the wedding, Middleton became emotional during a fraught discussion she had with Markle about the timing of the wedding rehearsal and the fit of the flower girl dresses.

Ahead of the wedding, Harry recalled that Middleton was upset over her daughter Princess Charlotte’s flower girl dress.
(Jane Barlow – WPA Pool/Getty Images)

He recounted that Middleton texted Markle during the week of the wedding that there was a “problem” with her daughter Princess Charlotte’s flower girl dress.

Harry explained that it was expected that the “French haute couture dresses,” which had been “hand-sewn based solely on [the bridesmaids’] measurements” would need alterations.

According to the Duke of Sussex, Markle asked Middleton to bring Charlotte to the palace so that a tailor could make alterations to the dresses for all six of the bridesmaids. Harry wrote that Middleton deemed this suggestion “not sufficient” and set up a time to speak with Markle.

During their conversation, Harry alleged that Middleton told Markle that her daughter’s dress was too big, long and baggy.” She also allegedly said that Charlotte “burst into tears when she tried it on.”

After Markle repeated that she should bring Charlotte over for alterations, Middleton allegedly told her that all the dresses needed to be remade.

Markle went on to make the “baby brain” comment, which offended the Duchess of Cambridge, according to the memoir.

Though Middleton eventually agreed to bring Charlotte over for alterations, Harry recalled finding Markle crying “on the floor” after the exchange. He noted that Middleton apologized and brought a card and flowers when she came over the next day.

He later wrote that Markle was “offended” after being “reprimanded” for remark and was told that she “wasn’t close enough” to Middleton to make comments about her hormones. According to Harry, Markle was brought to tears again after being told off.

The clash over the “baby brain” remark was one of many revelations that has emerged from Harry’s bombshell memoir.

“Spare” is set to be released in the United States Jan. 10.

Ashley Hume is an entertainment writer for Fox News Digital. Story tips can be sent to ashley.hume@fox.com and on Twitter: @ashleyhume

News - April 5, 2022 0
US and eurozone government debt sold off as traders took into account the prospect of stronger sanctions against Russia and comments from a top...

News - March 6, 2022 0
Startups based in the U.S. and Europe with employees and customers in Russia are facing...

News - November 11, 2021 0
One of the world’s fastest-growing ecommerce markets, India has seen a D2C boom in recent times. Accelerated by the pandemic, direct-to-customer brands are focusing...

News - January 18, 2023 0
A Qantas Airways Boeing 737 plane landed in Sydney after an engine failed and the plane issued a mayday...
© 2022 Venture Current is a Flag Media LLC Publication. All Rights Reserved.
VC is part of the FLAG Token rewards network. Clients and partners can use FLAG Tokens for VC products and services.
VC runs 'Automatic' software. Stories posted here come from generic-topic Google news RSS feeds as well as client and partner-approved content.
If a story appears on this page that needs to be deleted due to licensing issues, please message us immediately so we can help you.