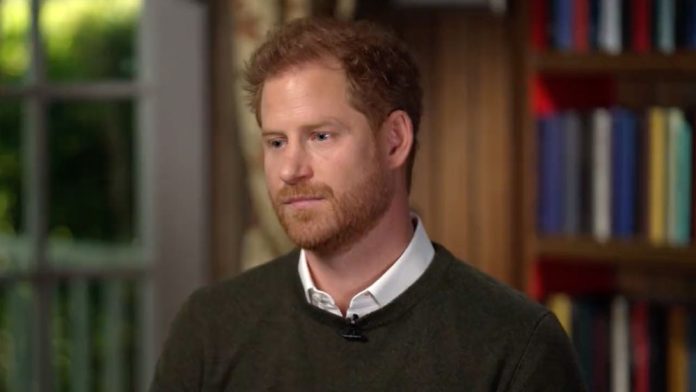 In the first of a number of interviews promoting new memoir Spare, Prince Harry has said he’s “spent the last six years trying to get through to my family privately” before reaching the point of “fleeing my home country fearing for our lives.”

Harry delivered an extraordinary broadside against the “briefings, leakings and plantings” to the press that have come from members of his own Royal Family about him and wife Meghan Markle as a reason for his now going public with first Netflix documentary Harry & Meghan and then the book plus a set of interviews including three in the U.S. in the next 24 hours.

“The level of planting from other members of the Royal Family means in my mind they have written thousands of books,” he added. “It got to the point where we had to leave. The distorted narrative is that we wanted to leave to make money but that’s not the case, we would have stayed for a life of service.”

Sitting down for the highly-anticipated interview with friend and ITV Correspondent Tom Bradby, Harry criticized “some members of the Royal Family who have got in bed with the devil” – the devil being the British tabloid media.

While he said he “understands” why they did this, he is after “reconciliation” and is therefore telling his story via documentaries and a book. Harry didn’t elaborate on who he was referring to with his “devil” remarks but they will no doubt have the British commentariat playing guessing games following a deep-dive 90-minute interview that may leave his hopes of “reconciliation” a fair few steps further away.

The Duke of Sussex, who is now based in LA with his wife, said he had spent almost the whole period of his relationship with the former Suits actor “writing letters, having conversations and writing emails” to other Royal Family members about their difficulties, but was always told: “This is not what’s happening, you’re imagining it.”

He urged his family to “put in a lot of work on themselves” in the same vein as he has, pointing to his recognition of issues with “unconscious bias” that he has tackled over the past few years.

“The family could learn a hell of a lot from that,” he said.

“Unconscious bias” formed part of a strange section of the interview during which Harry appeared to say the unnamed ‘racist Royal’ – who he and Markle highlighted during their 2021 Oprah interview had questioned how dark their son Archie’s skin would be – was in fact not racist but instead exhibiting unconscious bias.

“There was a lot of stereotyping”

Although they were Suits fans, he said brother Prince William and wife Kate Middleton didn’t like Markle almost immediately and “there was a lot of stereotyping” due to Markle being an “American actress, divorced and biracial.”

“That stereotyping caused a barrier to them letting her in,” he added. “They were living in the tabloid bubble rather than reality.” Incidentally, Harry is in the process of pursuing three different lawsuits against British tabloid media organizations, including one where he and a number of high-profile individuals have accused the Daily Mail owner of hiring investigators to plant listening devices in their houses.

Much of the interview was spent discussing Harry’s now almost completely broken relationship with William, a lot of which had been teased prior to the launch of Spare. He spoke of the difference in the press coverage of his relationship with Markle compared to William and Middleton and said William told him when he became engaged to Markle: “This is going to be really hard for you.”

“I have spent the last six years trying to get through to my family privately,” he added, in response to a question over his much-critcized decision to repeatedly go public with the issues.

“If it had stopped before the point that I fled my country with my wife and son fearing for our lives then maybe things would have turned out differently.”

Later touching on his father, now-King Charles III’s marriage to Camilla Parker Bowles, Harry produced another book extract in which he said he had urged the pair not to marry.

Harry went on to discuss the heart-wrenching death of mother Princess Diana 25 years ago, having read out an extract from the book when his father first told him his mother had died.

“This is relatable for anyone who has experienced loss,” he added, before talking about feeling the “wet hands” of well-wishers in the days after Diana’s death – well-wishers who had been drying away their tears.

He said people who watched Harry & Meghan will question “why would you want your family back?” but he “does want them back 100%,” adding: “I hope reconciliation between my family and us will have a ripple effect across the entire world.”

He said he is “now at peace,” which “angers and infuriates” some people.

Rejecting the notion that he has spent too much time telling his story and reflecting on his past, he described the documentaries, book and interviews as “cathartic” and involving “a lot of energy.”

“There’s a lot of relief now that they are over,” he said. “I’ve made peace with a lot of this but am still hoping for accountability.”

The interview came after a week replete with dramatic extracts from the book being dripfed by the UK media, after the book was accidentally published in Spain several days early, while at the same time ITV and CBS have regularly released trails for their upcoming interviews.

The most dramatic was The Guardian’s unveiling of an extraordinary physical attack Harry claims took place at the hands of his brother William, in which William is said to have pushed Harry on to a dogbowl after claiming Markle was “difficult,” “rude” and “abrasive.”

This extract was also read out in the Bradby interview, with Harry saying he had “seen a red mist in William.”

Therapy sessions that “helped him control that anger and frustration” stopped Harry from fighting back, he added.

Returning to a much-discussed theme, Harry said the fight happened after untrue narratives emanating from the British tabloid press.

Other extracts to have emerged in the past few days concerned Harry’s drug use, losing his virginity and killing 25 Taliban while he was serving in Afghanistan. On his drug use, Harry said in the ITV interview the revelation was “important to be acknowledged.”

He will be interviewed at 7 p.m. EST on CBS’ 60 Minutes with Anderson Cooper later today, before appearing on The Late Show and Good Morning America tomorrow.

News - February 16, 2022 0
PETROPOLIS, Brazil (AP) — The death toll from devastating mudslides and floods that swept through a mountainous region of Rio de Janeiro state has...

News - October 2, 2021 0
Newsletter: The Road to RecoveryExpert coverage of how business and the economy are recovering, post-pandemic. Delivered 3 times a week. Protesters from the US to...

News - December 20, 2022 0
DraftKings Inc: "I feel safer in my DraftKings than I do in a crypto. That said, gambling, not yet, but that stock is very...
© 2022 Venture Current is a Flag Media LLC Publication. All Rights Reserved.
VC is part of the FLAG Token rewards network. Clients and partners can use FLAG Tokens for VC products and services.
VC runs 'Automatic' software. Stories posted here come from generic-topic Google news RSS feeds as well as client and partner-approved content.
If a story appears on this page that needs to be deleted due to licensing issues, please message us immediately so we can help you.