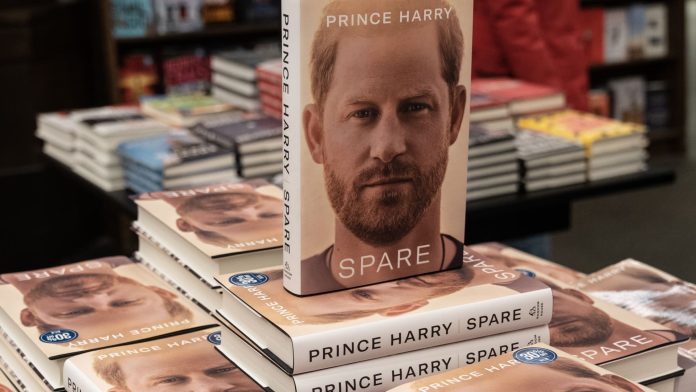 Though the 38-year-old has been on a media blitz promoting his book in recent weeks, the prince had help piecing together the 416-page manuscript for “Spare” in the form of superstar ghostwriter J.R. Moehringer, who has quietly written a number of other bestselling autobiographies.

Ghostwriters are writers who pen books on behalf of another party, usually without publicly receiving credit. In the case of “Spare”, Moehringer’s name does not appear on the cover and the book is attributed solely to Prince Harry.

Though he has not done any press for “Spare”, Moehringer has opened up about the ghostwriting process in the past.

He has ghostwritten two other bestselling autobiographies: 2009’s “Open” for American tennis star Andre Agassi and 2016’s “Shoe Dog” for Nike founder Phil Knight. Additionally, in 2005 he penned his own memoir, “The Tender Bar”, which was adapted into a 2021 film starring Academy Award winner Ben Affleck.

In the case of Agassi’s memoir, Moehringer told the New York Times in 2009 that he spent 250 hours with the 8-time Grand Slam champion in sessions that “sometimes resembled psychoanalysis.” But the end result allowed him to more accurately capture Agassi’s voice and tell his story.

“You try and inhabit their skin, and even though you’re thinking third person, you’re writing first person, so the processes are mirror images of each other, but they seem very simpatico,” he said in a 2012 interview on NPR’s “Fresh Air”.

Tennis star Andre Agassi poses with a German edition of his autobiography “Open”.

News - October 14, 2021 0
The rules differ depending on your state, but the federal government begins taxing Social Security benefits once provisional income hits $25,000 for single filers...

News - September 11, 2021 0
These days, it seems like there’s always a ton of security issues in Windows. PrintNightmare, malware, spyware, and viruses are just a few examples. So,...

News - September 21, 2022 0
Last week, journalists and influencers shared their first experiences with the iPhone 14 and iPhone 14 Pro. Most all of these reviews mentioned the...

News - September 9, 2022 0
As King Charles III takes the British throne, he brings with him a longstanding commitment to combatting climate change. Known for advocating environmental protection, Charles delivered...
© 2022 Venture Current is a Flag Media LLC Publication. All Rights Reserved.
VC is part of the FLAG Token rewards network. Clients and partners can use FLAG Tokens for VC products and services.
VC runs 'Automatic' software. Stories posted here come from generic-topic Google news RSS feeds as well as client and partner-approved content.
If a story appears on this page that needs to be deleted due to licensing issues, please message us immediately so we can help you.