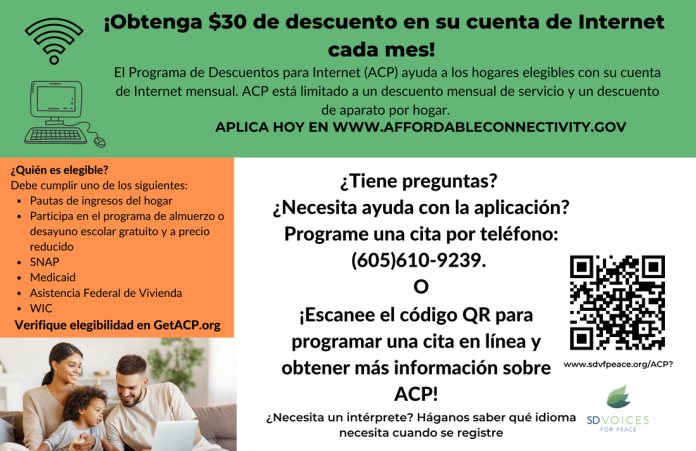 That’s why South Dakota Voices for Peace is using a grant through Civic Nation to help enroll people in Sioux Falls into the Affordable Connectivity Program (ACP) which provides eligible households with a $30 discount on monthly internet bills, $75 on tribal lands, and a one-time $100 device discount per household.

It is no secret that access to the internet is necessary for nearly every access of modern day life. But, Islam pointed out, the COVID-19 pandemic shined a light on the disparities within communities when it comes to access.

“You know, we heard the stories of kids who had to go on to online learning– because schools shut down– in the parking lot of McDonald’s because they didn’t have internet in their homes. So that’s why we’re really trying to create equity,” Islam said.

South Dakota Voices for Peace is hoping that by enrolling individuals in the program, it’ll help with access to news, jobs, online learning modules, and other information that previously were harder to access for low-income households.

While more rural parts of South Dakota may struggle to access broadband internet, Islam said that the issue in Sioux Falls is not access but affordability. Outreach coordinator Saliya Ali said that the non-profit recently helped one woman enroll in the program after she was no longer able to afford internet access after she suffered a workplace injury, stopping her from being able to work.

“She was really grateful because she wants to go take CNA classes, and she figured out that a lot of those programs require computer literacy. And so she’s excited to have access to internet at home. So, she can be computer literate and take those classes,” Ali said.

How can I enroll?

Eligibility for the program includes individuals, or their dependents, who participate in assistance programs such as Medicaid, WIC, SNAP, or qualify for free or reduced lunch programs or attend CPE schools. The goal is to enroll 100 eligible households into the ACP within the next month with an emphasis on multilingual residents.

To enroll, South Dakota Voices for Peace will be at the downtown library in Sioux Falls every Thursday from 4-8 p.m. and on Sunday from 1-5 p.m., on Friday’s they will be at Caminando Juntos from 12-4 p.m. and Kid Link at Terry Redlin and Laura B. Anderson on Tuesdays from 5-6 p.m. There will also be additional office hours at Falls Community Health downtown clinic on January 24 and January 31 as well as the Downtown Avera clinic on January 25 and February 8.

The variety of locations and times is to accommodate many different types of work schedules.

“Yeah, so we made it a point, a lot of, you know, people may work all throughout the week, especially a lot of like, Smithfield employees only get Sundays off. So we figured out a way to make that day accessible for people. And then, like Fridays, just being very intentional about making sure that we’re picking a variety of different times to ensure that we’re accessible as we can be,” Ali said.

While you can enroll directly through the ACP website, South Dakota Voices for Peace is offering pop-up clinics to make the process easier for individuals who may need help across language and technology barriers.

“So, they’re there to really walk alongside community members to assure that everything’s being done properly,” Islam said.

If you’re unable to make the popup clinics or office hours, you can call South Dakota Voices for Peace at 605-610-9239 or schedule an appointment online.

The non-profit will also be hosting a “Paper the Town” event on Martin Luther King Jr. Day where they’re inviting community members to help hang fliers promoting the program across the city.

News - July 30, 2022 0
Joe Biden has tested positive again for Covid-19, three days after announcing he was negative and resuming his in-person White House activities.The US president’s...

The Great Resignation is a myth: Meet the Great Reprioritization

News - March 1, 2022 0
Russia has stepped up its bombardment of Ukraine’s biggest cities, firing missiles on targets in populated areas and killing at least five people near...

Tories descend into acrimony as Johnson fights for his political life

News - June 6, 2022 0
Boris Johnson was about to set off for the final part of Queen Elizabeth’s platinum jubilee celebrations on Sunday when he was told that...
© 2022 Venture Current is a Flag Media LLC Publication. All Rights Reserved.
VC is part of the FLAG Token rewards network. Clients and partners can use FLAG Tokens for VC products and services.
VC runs 'Automatic' software. Stories posted here come from generic-topic Google news RSS feeds as well as client and partner-approved content.
If a story appears on this page that needs to be deleted due to licensing issues, please message us immediately so we can help you.