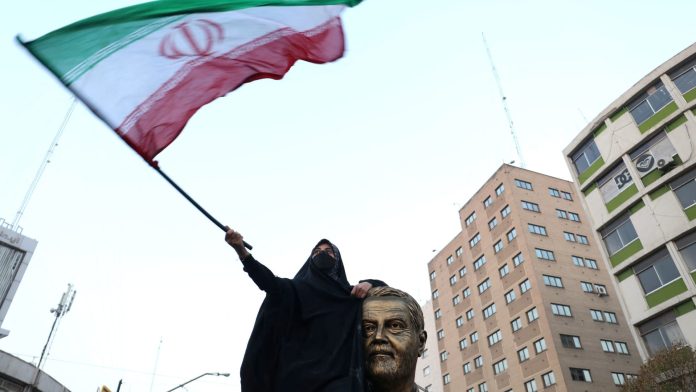 What lies ahead for Iran and its overseas activities will have significant consequences not only for millions of Iranians but also for Ukraine, Russia, much of the Middle East, and the foreign policy of Western governments.

It’s been a turbulent year for Iran.

A year that some hoped would see the revival of the Iranian nuclear deal and successful diplomacy with the West instead saw Iran strengthening its ties with Russia and violently cracking down on a popular protest movement led by women.

What lies ahead for the country and its overseas activities will have significant consequences not only for millions of Iranians but also for Ukraine, Russia, much of the Middle East, and the foreign policy of Western governments.

The Biden administration went from encouraging negotiations on reviving the Iranian nuclear deal to levying more sanctions on Tehran and condemning it for providing lethal weapons and training to Russian forces fighting in Ukraine. Iran’s Foreign Ministry denies knowing about Iranian weapons transfers to Russia, despite evidence of Iranian-made drones wreaking havoc on Ukrainian cities.

And the country of 85 million is in the throes of a protest movement that’s been described as the biggest challenge to the Islamic Republic government in decades. Meanwhile, its economy is spiraling and it is currently enriching uranium at its highest level ever — meaning Iran has never been closer to reaching nuclear bomb-making capability.

“2023 is going to be a pivotal year for Iran,” Ali Vaez, Iran project director at non-profit Crisis Group, told CNBC. “The economy is in more trouble than ever; the society is more disgruntled than ever; and the country is more isolated than ever.”

“The Islamic Republic is where the Soviet Union was in the early, not late, 1980s,” Vaez said. “It’s a regime that is ideologically bankrupt, economically broken, and politically paralyzed.”

The nuclear deal: too far gone?

Already in 2021, the chief of the United Nations’ nuclear watchdog, Rafael Grossi, told reporters that “only countries making bombs” are enriching uranium at Iran’s level of 60% — that’s just one technical step away from weapons grade, which is 90% purity.

Under the 2015 Iranian nuclear deal — which involved the U.S. and other powers and lifted economic sanctions on Iran in exchange for curbs on its nuclear program — Iran’s uranium enrichment was limited to 3.67%, enough for a civilian nuclear energy program.

A picture taken on November 10, 2019, shows an Iranian flag in Iran’s Bushehr nuclear power plant, during an official ceremony to kick-start works on a second reactor at the facility.

“The prospects for the revival of JCPOA are dim for 2023,” said Henry Rome, a senior fellow at the Washington Institute for Near East Policy, referring to the deal by its official acronym, which stands for Joint Comprehensive Plan of Action.

Rather than call it off entirely in response to Iran’s apparent support for Russia and brutal crackdown on protesters, “an ‘extend and pretend’ attitude toward the nuclear deal will probably continue for some time,” Rome added. Negotiations have been stalled since September.

The Trump administration pulled the U.S. out of the deal in 2018, reimposing severe sanctions on Iran that both damaged its economy and spurred its government to ramp up nuclear development. And prospects of the Biden administration reviving the accord are shrinking fast.

What’s more, time is running out for anything to be salvaged at all — key nuclear restrictions in the deal will expire in late 2023 as “sunset clauses” set in.

“The actual JCPOA will be increasingly in obsolescence in 2023,” said Ryan Bohl, a senior Middle East and North Africa analyst at Rane. And, he added, “neither Europe nor the United States wants to offer sanctions relief to a regime actively cracking down on protesters.”

Negotiators may have to start from scratch, and Western signatories to the deal will likely want to see a resolution to the protest movement first, some analysts say.

In the meantime, the West is announcing new sanctions while Iran keeps pushing ahead with its nuclear development, creating a larger and larger chasm between the two sides.

What next for Iran’s protest movement?

Nationwide protests that began in mid-September and quickly spread to scores of cities across Iran were triggered by the death of 22-year old Mahsa Amini, a Kurdish Iranian woman who died in police custody after being arrested for allegedly breaking Iran’s strict headscarf rules. The unrest ballooned into a full-blown movement demanding the removal of the Islamic Republic, Iran’s hardline theocratic government.

But after nearly four months and a campaign of bloody crackdowns and executions by the state, the question remains: How long will the protests last?

A protester holds a portrait of Mahsa Amini during a demonstration in support of Amini, a young Iranian woman who died after being arrested in Tehran by the Islamic Republic’s morality police, on Istiklal avenue in Istanbul on Sept. 20, 2022.

“The four forces to keep your eyes peeled on in 2023 on Iranian protests are streets, strikes, sanctions, and security forces,” said Behnam Ben Taleblu, senior fellow at the Foundation for Defense of Democracies. He expects there will be sustained protests in 2023 against the Islamic Republic, despite the government having an overwhelming advantage when it comes to the use of force.

“The regime retains all the tools of repression and will increasingly use them,” he said, but added that Iranians’ demands for political change inevitably mean more domestic instability.

Most Iran analysts interviewed by CNBC expect the demonstrations to continue in some form, but predictions on their intensity and effectiveness vary.

While the protests may still take unexpected turns, “the demonstrators have not yet mustered sizable, sustained support in key economic sectors or attracted defections from the security services,” Rome noted.

As for Rane’s Ryan Bohl, the most likely outcome is that the protests “are eventually suppressed and dissipate.” The second outcome, he said, is that the movement becomes institutionalized, turns into a viable opposition movement and is able to extract concessions from the regime.

The third and “least likely” — but still not impossible — outcome in the next year is that “the protest movement escalates to include other sections of Iranian society and causes splits within the regime that might actually threaten its survival,” Bohl said.

The latest conflict between Iran and the West came amid the Russia-Ukraine war in the form of lethal Iranian drones used by Russian forces to attack Ukraine.

That has already prompted more U.S. and EU sanctions on Iran — but that’s unlikely to stop the growing collaboration between the two increasingly isolated countries.

“Iran can’t afford to alienate Russia,” Crisis Group’s Vaez said. “The West will have to be creative in finding a way” to slow and limit the kinds of weapons it can transfer to Russia, he said — something already underway, as the Biden administration is reportedly working to choke off Iran’s access to foreign components for the weapons.

Ukraine has blamed Iran for providing Russia with drones, which have been used to attack Kyiv.

That will have diplomatic costs, which Tehran appears willing to weather, though it’s unclear what it will get in return — cash, weapons, technology or a combination of those.

Either way, “Iran is likely to continue playing hardball in 2023,” Ben Taleblu said, adding, “I fully expect Russia and Iran to continue tightening security, political, and economic ties in 2023.”

“An increasingly risk tolerant political elite may feel unstoppable abroad as they face challenges at home,” he said. “Should Iran proliferate ballistic missiles and not just drones to Russia for use in Ukraine, it would represent more proof of this perception.”

News - November 1, 2022 0
Carlyle Aviation Partners, one of the world’s biggest aircraft leasing operators, is seeking $700mn from more than 30 insurers and reinsurers after they failed...

News - July 31, 2022 0
CAIRO: Pakistan's imports significantly dropped in July, which is said to relieve some of the pressure on the rupee; China’s factory activity contracted unexpectedly...

News - September 6, 2022 0
Bad news: As we noted the other day, the real price tag of President Joe Biden’s student-loan-forgiveness plan turns out to be close to...

News - August 26, 2022 0
President Joe Biden's student loan forgiveness plan will soon cancel debt for millions of Americans — and the relief is tax-free on federal returns....
© 2022 Venture Current is a Flag Media LLC Publication. All Rights Reserved.
VC is part of the FLAG Token rewards network. Clients and partners can use FLAG Tokens for VC products and services.
VC runs 'Automatic' software. Stories posted here come from generic-topic Google news RSS feeds as well as client and partner-approved content.
If a story appears on this page that needs to be deleted due to licensing issues, please message us immediately so we can help you.