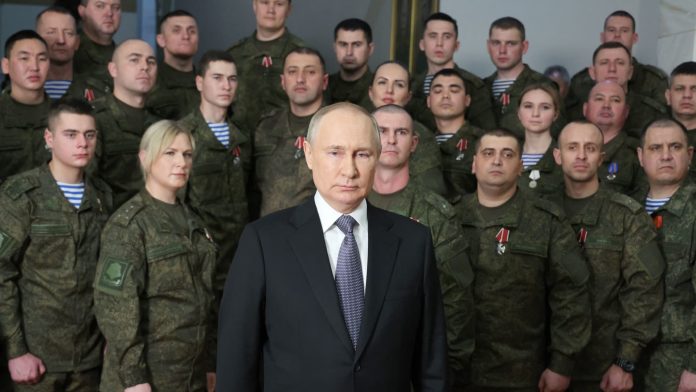 Russian President Vladimir Putin poses as he delivers a New Year’s address to the nation at the headquarters of the Southern Military District in Rostov-on-Don on December 31, 2022.

Russian President Vladimir Putin could be ready to announce another mobilization round, as Russia looks to bolster its armed forces in Ukraine, analysts believe.

“Putin may announce a second mobilization wave to expand his army in the coming days— possibly as early as January 18,” analysts at the Institute for the Study of War said Tuesday.

Kremlin Spokesperson Dmitry Peskov announced on Tuesday that Putin will deliver a speech in his hometown of St. Petersburg on Wednesday to commemorate the 80th anniversary of Soviet forces breaking the Nazi siege of Leningrad. This could be an apt date to announce such a mobilization, watchers noted.

“Putin is fond of using symbolic dates to address the Russian people, and some Russian pro-war milbloggers noted that he will seize this opportunity to either declare mobilization or war with Ukraine,” the ISW said in their daily analysis of the Ukraine war.

Russia has repeatedly insisted that it would not embark on a second mobilization wave, following an initial partial draft of military reservists that called up 300,000 men last September. The move sparked consternation in Russia and prompted many of those eligible for the draft to flee the country.

Fears of another potential mobilization grew with the onset of winter. Putin said in December that he saw no need for a second draft, noting that half of the men called up had already been deployed in Ukraine, while the others were in training centers.

“Under these conditions, talk about any additional mobilization measures simply makes no sense,” he said at the time.

Last Friday, Ukrainian defense ministry intelligence officials said that they believed that preparations for a second wave of mobilization were underway, suspecting Russia aims for an army of two million people.

“Military intelligence of Ukraine does not rule out that the leadership of Russia will announce another wave of mobilization in the coming days,” intelligence officials said in a statement, adding that another 500,000 Russians will be called up in order to “create strategic reserves.”

“Preparations for the announcement of the next wave of mobilization in Russia are already actively underway. At the legislative level, changes are being made to the laws of the Russian Federation that regulate mobilization. Active training of training centers is also underway,” intelligence officials added.

Over winter, the war in Ukraine has resembled a conflict of attrition, particularly in eastern Ukraine where fighting has intensified around Bakhmut — the next key Russian target after hostilities against nearby Soledar.

Daily losses from Ukrainian and Russian forces are difficult to ascertain independently.

Both sides are expected to renew counteroffensives in spring, stoking expectations that Russia will call up further manpower.

A Ukrainian tank runs on a road near Bakhmut, in the Donetsk region, on Dec. 2, 2022, amid the Russian invasion of Ukraine.

Moscow has made no secret of looking to expand its forces in the next few years. Defense Minister Sergei Shoigu in December laid out proposals to increase military personnel to 1.5 million by 2026, from 1.1 million at present.

On Tuesday, Shoigu laid out more comprehensive plans to reform and restructure the army over the next few years, saying that “only by strengthening the key structural components of the Armed Forces is it possible to guarantee the military security of the state and protect new entities and critical facilities of the Russian Federation,” Reuters reported.

Kremlin Press Secretary Dmitry Peskov said later Tuesday that the changes were necessary because of the “proxy war” that the West is fighting against Russia in Ukraine.

The proxy engagement, he said, “includes elements of indirect participation in hostilities, and elements of economic, financial war, legal war, going beyond the legal field, and so on.”

“The security of our country must be unconditionally ensured, and in this case the Ministry of Defense is fulfilling its role,” Peskov said, in comments translated by NBC.

Peskov dismissed the idea of another mobilization, adding that the “topic is constantly artificially activated both from abroad and from within the country. I still suggest that you remember all the time the relevant statements that President Putin made on this matter.”

News - July 16, 2022 0
North Macedonian lawmakers have approved a proposal to help resolve a longstanding dispute with neighbouring Bulgaria over history and language that opens the way...

News - November 9, 2021 0
Coinbase shares dropped almost 15 per cent on Tuesday after the cryptocurrency exchange reported disappointing revenue for the third quarter and a shrinking number...

News - December 31, 2021 0
Following a 2021 that saw incredible amounts...
© 2022 Venture Current is a Flag Media LLC Publication. All Rights Reserved.
VC is part of the FLAG Token rewards network. Clients and partners can use FLAG Tokens for VC products and services.
VC runs 'Automatic' software. Stories posted here come from generic-topic Google news RSS feeds as well as client and partner-approved content.
If a story appears on this page that needs to be deleted due to licensing issues, please message us immediately so we can help you.