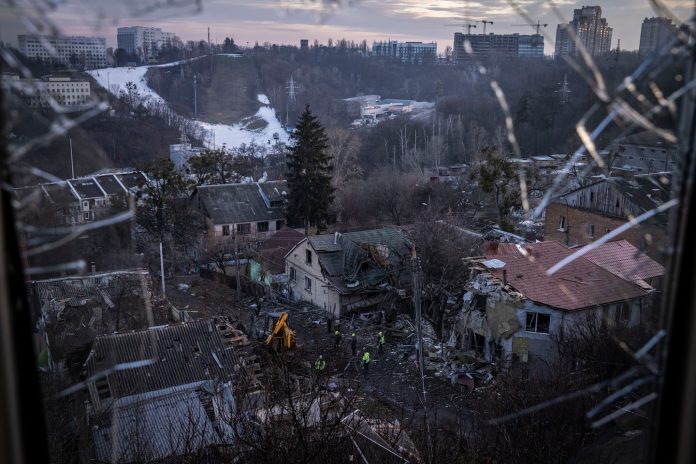 KYIV, Ukraine — As Moscow launched a fresh barrage of strikes against Ukraine on Saturday, Russian President Vladimir Putin gave an unusually aggressive prerecorded address, which was broadcast as Russians in the Far East began their New Year’s celebrations.

This New Year’s message was notably different from previous years, a reflection of the new path the country has taken since Russia invaded Ukraine this February.

In the address, which was broadcast at midnight on Russian state television in line with the country’s 11 different time zones, Putin said Russia was fighting in Ukraine to protect its “motherland” and called 2022 “a year of hard, necessary decisions” and “fateful events” that had laid the foundation of Russia’s future and independence.

Set against a backdrop of Russian military service members, instead of the typical wintry vista of the Kremlin, Putin’s speech marked a significant shift in tone, more combative and nationalistic, instead of festive and celebratory.

Takeaways on how Ukrainian counteroffensives reshaped the war

In the nine-minute message — the longest New Year’s address in Putin’s two-decade rule — he thanked the Russian army for its “strength of spirit and courage,” before launching into a tirade against the West, which he has repeatedly blamed for provoking the offensive.

“The West lied about peace but was preparing for aggression” and is “cynically using Ukraine and its people to weaken and divide Russia,” Putin said. “We have never and will never allow anyone to do this to us.”

As the first footage of the speech was broadcast, dozens of missiles rained down on Kyiv and other regions in Ukraine. Several explosions were heard in Kyiv, and a Washington Post journalist saw from her apartment window what appeared to be a Ukrainian air defense rocket intercepting a Russian missile. It was unclear if the sound of the explosions were from the air defense systems or missiles hitting targets.

“The terrorist state once again shows its cynicism. Even on New Year’s Eve, it continues to launch massive missile strikes,” Oleksiy Kuleba, the regional governor of Kyiv, wrote on Telegram. Kuleba said there were no injuries in the strike but a number of “civilian objects were damaged by debris,” adding that “Russia fires missiles because it knows that for us it is the New Year, and for them it is the last.”

Saturday’s attack follows a massive airstrike two days earlier, one of the largest since the beginning of the invasion, in what is becoming an intensifying battle between Russian missiles and Ukrainian air defenses, as Kyiv tries to thwart Moscow’s attempts to destroy critical Ukrainian infrastructure.

The attacks indicate that Putin has no intention of letting up his campaign to leave Ukrainians without light, heat and water this winter while Russian advances along the front lines in Ukraine’s east and south have ground to a halt.

Despite feverish efforts by Ukrainian engineers to repair critical energy infrastructure after each attack, every region of the country has been hit by regular power outages, as officials ration electricity to avoid overloading the electrical grid.

On Saturday, Kyiv Mayor Vitaly Klitschko confirmed that several explosions had rocked the capital, causing extensive damage and one death. Klitschko wrote on Telegram that at least 20 people had been injured, including a Japanese journalist, and that 16 were hospitalized. Post reporters in Kyiv observed that more residential areas appeared to have been hit than in previous strikes.

Valery Zaluzhny, commander in chief of the Ukrainian military, said Saturday on Telegram that Ukrainian air defenses had destroyed 12 out of 20 cruise missiles fired by Russia from the Caspian Sea region and “land-based” locations. Six were destroyed within Kyiv, five in Zhytomyr and one in Khmelnytskyi.

Biden administration to send the Patriot missile system to Ukraine

In Thursday’s attack, Ukrainian officials said they had intercepted 54 out of 69 fired Russian missiles and all 16 were destroyed in Kyiv. The Kyiv military administration also posted on its official Telegram channel that seven “rockets and enemy drones” had been destroyed on Saturday, but it did not specify how many missiles were fired at the capital. The Post could not independently verify the figures from Ukrainian authorities.

To bolster Ukraine’s air defense capabilities, the United States has delivered two of eight promised National Advanced Surface to Air Missile systems, or NASAMS, and Germany provided an Infrared Imaging System Tail system. Washington has also pledged to supply a Patriot missile system, one of its most advanced, though it is unclear when it will be able to be deployed in Ukraine.

Earlier on Saturday, several Russian officials gave their own optimistic New Year’s statements, despite major battlefield losses that have shaped the recent stages of the war. Former Russian president Dmitry Medvedev said that in the final minutes of the year Russian soldiers were continuing to “heroically defend their fatherland.”

In his own New Year’s address Saturday evening, Ukrainian President Volodymyr Zelensky thanked the country’s air defense forces and soldiers fighting on the front lines, and said that Saturday’s attack was not “the end of the year” but “the summary of the fate of Russia itself.”

“This war that you are waging, Russia, it is not with NATO, as your propagandists lie. It is not for historical reasons,” Zelensky said. “Your leader wants to show that he has the military behind him and that he is in front. But he is just hiding. He hides behind the military, behind missiles, behind the walls of his residences and palaces.”

“He hides behind you and burns your country and your future. No one will ever forgive you for this terror,” he continued. “Ukraine will never forgive.”

Ebel reported from London. Isabelle Khurshudyan in Kyiv contributed to this report.

News - September 5, 2022 0
James Wang, head of China strategy at UBS Investment Bank Research, discusses the outlook for the country's stock market and the opportunities he sees....

Vivillon in Pokémon GO: Everything you need to know | Pokémon GO Hub

News - December 16, 2022 0
Scatterbug, Spewpa, and Vivillon have made their Pokémon GO debuts! Trainers worldwide are now able to collect Scatterbug’s whole Evolutionary line! Learn how to...

News - November 4, 2021 0
The man, who was identified by Australian public broadcaster as Terence Kelly, will appear in Carnavon court on Thursday afternoon, according to a police...

U.K.’s Boris Johnson to Resign After Scandals Grow Too Great to Handle

News - July 7, 2022 0
LONDON—Boris Johnson will step down as British prime minister on Thursday, government officials said, following a wide-scale rebellion in his party, capping an astonishing...
© 2022 Venture Current is a Flag Media LLC Publication. All Rights Reserved.
VC is part of the FLAG Token rewards network. Clients and partners can use FLAG Tokens for VC products and services.
VC runs 'Automatic' software. Stories posted here come from generic-topic Google news RSS feeds as well as client and partner-approved content.
If a story appears on this page that needs to be deleted due to licensing issues, please message us immediately so we can help you.