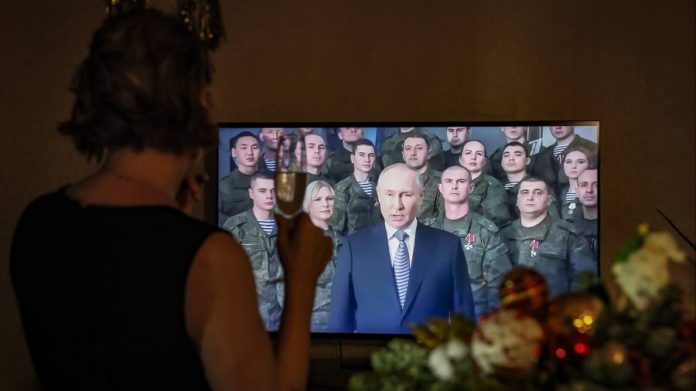 Russian cinemas will open their doors this winter not to offer movie-goers entertaining distraction from the almost year-long war in Ukraine, but precisely the opposite.

President Vladimir Putin this week ordered the defence ministry to provide access so that filmmakers make documentaries about troops striving to conquer territory in Russia’s neighbour. The culture ministry was instructed to organise cinema screenings.

While the documentaries have been commissioned to depict “the heroism of the participants of the special military operation”, rather than the brutal reality of Russia’s faltering war effort, the decision is a sign of how the Kremlin is adjusting its narrative — notwithstanding its call for a unilateral ceasefire in Ukraine over the orthodox Christmas.

Rather than continue to shield the Russian people from the war and its costs, Putin appears increasingly inclined to expose them to it. It is, say analysts, an inevitable response to what has become a protracted and all-consuming conflict and a way of girding the population for future sacrifices, including a possible further mass mobilisation of fighting age men.

From the start of Russia’s full-scale invasion of Ukraine last February, Putin took “a clear position that society should be distanced from the war”, said Tatiana Stanovaya, senior fellow at the Carnegie Endowment for International Peace.

The president’s message was: “the war is being handled by professionals. Life continues in Russia as normal. And he has tried to shield society in all sorts of ways from the problems of war, trying to guarantee to them that the government will handle it on its own,” Stanovaya said.

“But on the other hand, there’s the reality. And it has started to introduce changes to the situation in ways that are outside of Putin’s control.”

Putin set the tone with a militaristic New Year’s eve address to the nation last week, surrounded by grim-faced men and women dressed in army fatigues.

The president always presented himself as the “apostle of balance, the protector of the great equilibrium,” said Russian political scientist Ekaterina Schulmann, in a radio interview this week. “He always came out and told people that everything’s fine, sang them lullabies . . . communicating to them that tomorrow will be the same as yesterday.”

Putin’s New Year message on the other hand “sent a very evocative picture” that 2023 would be far from normal, Schulmann said.

Hours after his address, Ukrainian guided missiles slammed into a technical college that was serving as a temporary barracks for Russian conscripts in Makiivka, a town in occupied eastern Ukraine.

The Kremlin could have tried to cover up the attack, as it did initially following the sinking of its Black Sea flagship, the Moskva, in April. Instead, it confirmed it, saying first 63 and then 89 of its troops were killed — the highest death toll it has admitted from a single incident since the invasion in February, although some Russian war correspondents and commentators as well as Kyiv say the number killed was much higher.

In Samara, in central Russia, from where many of dead men were conscripted, local authorities held a rare official memorial attended by grieving families.

Even Yegveny Prigozhin, the head of the Wagner paramilitary group which has sent tens of thousands of men to the front lines in Ukraine, has begun to show elements of candour about the brutal nature of the war.

Over the new year he released a video featuring him in a makeshift morgue where bodies of his dead fighters were stacked high. In another clip, he described how Wagner troops could spend days fighting just to win control over one house in the eastern town of Bakhmut.

His paramilitary group had previously vaunted its achievements in the battle for the frontline city in Donetsk province and compared them favourably with those of regular Russian forces.

Russian military bloggers and western analysts said the scale of Russia’s losses in the Makiivka attack was so great that it had to manage the story rather than conceal it — placing the blame on local commanders and on mobilised soldiers for unauthorised use of their mobile phones, giving away their position.

Russian nationalists, including Prigozhin, and some Kremlin officials have for months urged Putin to shift to a “total war” footing in order to mobilise the people and the country’s vast resources.

“Russia has always won any war if that war becomes a people’s war,” said Sergei Kiriyenko, deputy head of the presidential administration, in October.

“We are sure to win this war: the “hot” [fighting], and economic, and the very psychological, information war waged against us. But this requires that it be a people’s war, so that everyone feels involved.”

Dara Massicot, an expert on the Russian military at the Rand Corporation think-tank, said the shift in narrative about the war began with the mobilisation of 300,000 men in September. It is a “form of conditioning”, she said, that would help underpin a further mobilisation in the months ahead.

“I think it’s likely they will need another round of mobilisation in 2023 to replace losses from the first and allow for rotations — from what they’ve said about it, they may try to do it on a smaller rolling basis if they can.”

Putin, however, was still ambivalent about exposing the Russian public to the war, said Stanovaya, even though he wanted it to be seen as society’s choice and a product of historical process rather than his personal decision.

“He has this desire to share responsibility [for the war] with society, but at the same time not to traumatise it and to keep down anxiety levels as much as it is possible, though these are currently soaring regardless,” she said. “Putin is trying to sit on two chairs, but this is becoming harder and harder to do.”

H2O.ai Unleashes H2O World in Sydney with Commonwealth Bank of Australia in the Largest...

Westminster Abbey has seen a millennium of history, but many rituals aren’t so old

News - December 30, 2022 0
The Bank of Japan continued a run of unscheduled purchases of government bonds in an attempt to control a surge in yields caused by...

Subverting PS4 And PS5 Through The PS2 Emulator

News - October 4, 2022 0
Game console hacking remains a fascinating area, and...
© 2022 Venture Current is a Flag Media LLC Publication. All Rights Reserved.
VC is part of the FLAG Token rewards network. Clients and partners can use FLAG Tokens for VC products and services.
VC runs 'Automatic' software. Stories posted here come from generic-topic Google news RSS feeds as well as client and partner-approved content.
If a story appears on this page that needs to be deleted due to licensing issues, please message us immediately so we can help you.