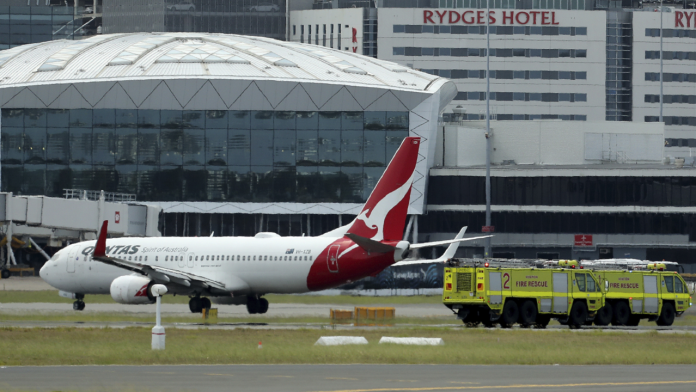 A Qantas Airways Boeing 737 plane landed in Sydney after an engine failed and the plane issued a mayday call Wednesday.

A Qantas Airways plane has managed to land safely in Australia on a single engine Wednesday after it issued a mayday call while flying over the Pacific Ocean.

Qantas Flight 144, a Boeing 737-838 carrying 145 passengers, “experienced an issue” with one of its two engines when it was an hour away from Sydney, the airline said in a statement to The Associated Press. The plane had departed from Auckland, New Zealand.

“Thank God we are here. We thank the captain profusely for his professionalism. Thank the Lord,” a passenger told reporters that had gathered at Sydney Airport following the plane’s arrival.

One passenger reported hearing a “bang” mid-air before the plane landed.

A Qantas jet is parked on the tarmac next to firetrucks at Sydney International Airport after making an emergency landing in Sydney, on Wednesday, Jan. 18. (Jeremy Ng/AAP Image via AP / AP Images)

“We didn’t realize it was actually the whole engine had gone, we just heard a bang and that was it,” she said.

Qantas said the pilot shut down the troubled engine, but did not specify the problem.

The mayday call that came from the plane, which is issued when a flight is in grave and imminent danger and needs immediate assistance, was downgraded to a PAN-PAN — possible assistance needed — before the flight landed, the Associated Press reported.

Qantas Flight 144 managed to land safely Wednesday in Sydney, Australia after one of its engines malfunctioned. (Credit: AuBC)

Passengers embrace their loved ones after getting off Qantas Flight 144 following its arrival in Sydney, Australia. (APTN/AuBC / AP Images)

“While inflight engine shutdowns are rare, and would naturally be concerning for passengers, our pilots are trained to manage them safely and aircraft are designed to fly for an extended period on one engine,” Qantas said.

Other passengers described their experience of the engine malfunction as a “slight shudder” and “bumpy-like turbulence.”

Sydney Airport said emergency crews were put on standby as a precaution, including firefighters, ambulances and police.

FOX Business has reached out to Qantas Airlines and Boeing for further comment.

‘A perfect storm’ as bitcoin stages weekend crash that puts it on verge of...

News - December 4, 2021 0
A downturn in global stocks appears to be spilling over into the nascent crypto market, with a bout of weekend selling erupting into a...

News - May 13, 2022 0
A Finnish transmission system operator announced on Friday that a Russian energy company would be cutting off its electricity imports to Finland beginning the...

News - January 1, 2022 0
Happy New Year! 2022 has officially arrived, and we're looking forward to another incredibly busy twelve months for Xbox, with the likes of Starfield,...

News - December 2, 2022 0
Source
© 2022 Venture Current is a Flag Media LLC Publication. All Rights Reserved.
VC is part of the FLAG Token rewards network. Clients and partners can use FLAG Tokens for VC products and services.
VC runs 'Automatic' software. Stories posted here come from generic-topic Google news RSS feeds as well as client and partner-approved content.
If a story appears on this page that needs to be deleted due to licensing issues, please message us immediately so we can help you.