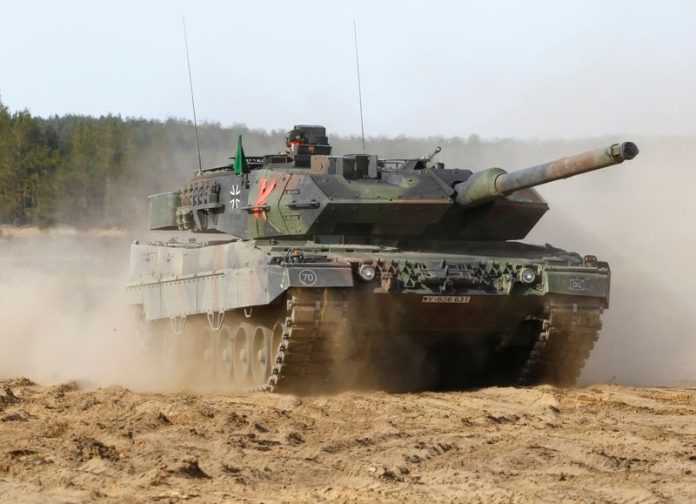 BERLIN (Reuters) – German armsmaker Rheinmetall could only deliver repaired Leopard 2 battle tanks to Ukraine in 2024 at the earliest, its chief executive was quoted as saying by Bild newspaper on Sunday.

Germany announced earlier this month that it would provide Ukraine with Marder infantry fighting vehicles to help repel Russian forces. But Kyiv has also requested heavier vehicles such as the Leopards, which would represent a significant step-up in Western support to Ukraine.

Repairing the tanks it has in stock would cost several hundred million euros and the company could not begin doing so before the order was confirmed, Papperger told Bild.

“The vehicles must be completely dismantled and rebuilt,” he added.

Germany has become one of Ukraine’s top military supporters in response to Russia’s invasion after last year, overcoming a taboo that is rooted in its bloody 20th century history on sending weapons to conflict zones.

Still, critics say German Chancellor Olaf Scholz and his ruling SPD are too slow, waiting for allies to act first instead of assuming Germany’s responsibility as the Western power closest to Ukraine.

Economy Minister Robert Habeck said earlier this month delivering the heavier Leopard tanks could not be “ruled out”.

News - January 25, 2023 0
Comment on this storyCommentI remember getting my Social Security statement a few months before my birthday. It was, for years, the ideal time for...

News - January 2, 2022 0
Microsoft has released an emergency fix for a year 2022 bug that is breaking email delivery on on-premise Microsoft Exchange servers. Source

Housing data and retail could be the next catalysts for the market in week...

News - August 12, 2022 0
Stocks could continue to push higher into the dog days of August, as investors await earnings from big retailers and new data on housing...
© 2022 Venture Current is a Flag Media LLC Publication. All Rights Reserved.
VC is part of the FLAG Token rewards network. Clients and partners can use FLAG Tokens for VC products and services.
VC runs 'Automatic' software. Stories posted here come from generic-topic Google news RSS feeds as well as client and partner-approved content.
If a story appears on this page that needs to be deleted due to licensing issues, please message us immediately so we can help you.