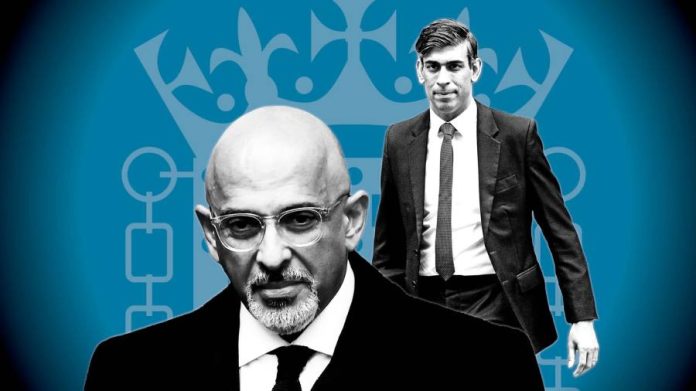 Rishi Sunak entered Downing Street promising “integrity, professionalism and accountability at every level”, but on Monday the prime minister faced claims he was failing to ruthlessly clean up British politics.

Sunak’s Tory party chair Nadhim Zahawi remains in post — for now — in spite of revelations he paid a penalty to HM Revenue & Customs to settle a tax dispute while he was chancellor, the minister in charge of the public finances.

The fact that Zahawi is still in office is baffling to many Conservative MPs and left some wondering whether Sunak has the steel to root out problems which became endemic during Boris Johnson’s time in Downing Street.

“This is fatal for Nadhim, he’s toast,” said one former Tory cabinet minister. A backbench Conservative MP added: “It doesn’t look good at all. From Labour’s point of view, it can only be a good thing if this story is dragged out.”

Zahawi was appointed chancellor by Johnson, but the problem is now one for Sunak, whose government is feeling the backwash of some of the decisions made before he became prime minister.

Richard Sharp, the BBC chair, is facing two investigations over media reports he helped Johnson secure a private loan shortly before the then prime minister recommended his appointment in 2021.

Flapping around doesn’t work. Either Zahawi has a complete explanation, or he should go.

The two ethics cases come soon after Sunak, who received a police fine during the partygate scandal, received a second fixed penalty notice for failing to wear a seatbelt in a car during a visit to Lancashire last week.

The danger for Sunak is that a series of events combine to give a sense that his government has lost control or — more dangerously — that the Tories are decaying after more than 12 years in power.

Sir Gary Streeter, a Conservative MP in Sir John Major’s government from 1992-97, said there was not yet “the stench of decay” around the Sunak administration that accompanied Major’s time in office. But he added problems must be dealt with quickly.

“Rishi’s leadership is going to deliver a good result for us, unless the combined weight of Tory MPs behaving badly undermines that and drags us down,” said Streeter. “That’s why it’s so important to grip these things when they arise.”

Dominic Grieve, former Tory attorney-general, said: “I do think the government has got itself into a mess. You have got to be ruthless to get yourself out of it.”

He added Sunak’s decision to refer Zahawi to his independent ethics adviser, Sir Laurie Magnus, smacked of hesitation. “Flapping around doesn’t work,” he said. “Either Zahawi has a complete explanation, or he should go.”

Sunak’s aides said by referring Zahawi to an ethics inquiry to establish the full facts, he was adhering to due process. But it means potentially weeks of delays, with a lame duck Tory chair in place.

Dominic Raab, deputy prime minister, was sent out to defend Zahawi at the weekend, but he is also facing an inquiry into allegations about his conduct towards civil servants. Raab denies bullying officials.

The prime minister’s allies said Zahawi had settled his HMRC dispute in 2022 — at a cost thought to total about £5mn — by the time Sunak entered Downing Street and that the row was therefore in the past.

“I am confident I acted properly throughout,” said Zahawi on Monday. But Sir Keir Starmer, Labour leader, said: “I think it’s obvious that Zahawi can’t stay as Tory party chair.”

Sunak’s allies said the prime minister only found out about Zahawi’s HMRC tax penalty at the weekend, days after he defended his Tory chair in the House of Commons.

But Zahawi has long been reluctant to give details of the affair. Last year he described as “unfair smears” a report by the Independent newspaper that the National Crime Agency, HMRC and the Serious Fraud Office had investigated his tax affairs.

Meanwhile Dan Neidle, the tax expert whose investigations helped to prompt the HMRC probe into Zahawi, has written about how the Tory chair’s lawyers last year sent him warnings about his reporting but telling him he was barred from disclosing the existence of the letters.

Questions are now focused not just on the culture among politicians at the top of government but also why Simon Case, cabinet secretary, did not do more to nip potential problems in the bud.

Sharp’s involvement in arranging the £800,000 loan to Johnson in 2020 to rescue his personal finances was first reported by the Sunday Times newspaper.

The source of the credit facility has not been disclosed but it was underwritten by Canadian businessman Sam Blyth, a distant relative of Johnson.

Blyth raised the idea of acting as a guarantor with Sharp, who then brought the suggestion to Case. At the time Sharp was applying to become chair of the BBC.

Senior civil servants are already unhappy with Case for what they regard as his failure to uphold high standards in Number 10 during the Johnson era.

One official said: “We are all shocked that Simon appears to have been involved in brokering or making introductions with a view to sorting out Boris Johnson’s finances.

“That’s especially true when this was being done through a candidate for the BBC chair role while the appointment process was ongoing. This isn’t the high integrity look Rishi Sunak is going for.”

The Cabinet Office said: “Richard Sharp was appointed as chairman of the BBC following a rigorous appointments process including assessment by a panel of experts, constituted according to the public appointments code.”

News - October 16, 2022 0
The UK’s new chancellor, Jeremy Hunt, has insisted that Prime Minister Liz Truss is still running the government after reports suggested he was preparing...

Afghanistan: The ones we leave behind

News - August 25, 2021 0
The eyes and hopes of the world are appropriately fixed right now on tens of thousands of Afghans scrambling to flee their country in...

Apple wants to check your phone for child abuse images – what could possibly...

News - August 7, 2021 0
Sign up for the Week in Patriarchy, a newsletter​ on feminism and sexism sent every SaturdayPrivacy. That’s (no longer) iPhone.Apple, which has spent big...

News - May 15, 2022 0
A recent report from Bloomberg claimed that the iPhone is set to ditch the Lightning port for a USB-C connection in 2023. Now, reputable...
© 2022 Venture Current is a Flag Media LLC Publication. All Rights Reserved.
VC is part of the FLAG Token rewards network. Clients and partners can use FLAG Tokens for VC products and services.
VC runs 'Automatic' software. Stories posted here come from generic-topic Google news RSS feeds as well as client and partner-approved content.
If a story appears on this page that needs to be deleted due to licensing issues, please message us immediately so we can help you.