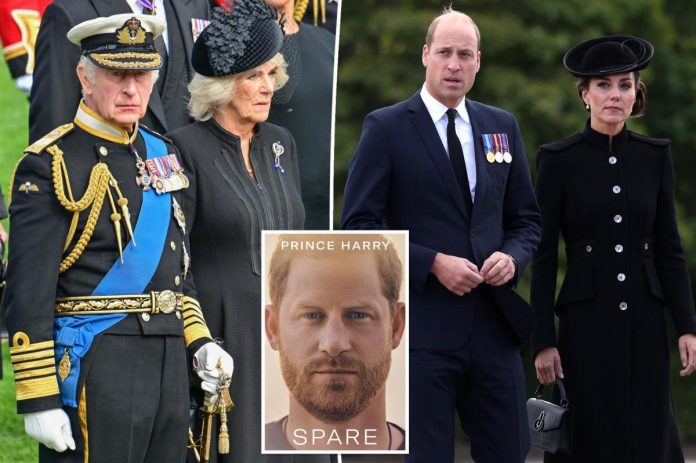 The royal family’s senior advisers set up a de-facto “war room” to deal with any potential fallout from Prince Harry’s bombshell memoir, Page Six can reveal.

Top staff even discussed the situation at Sandringham Estate, where the royal family gathered to celebrate their first Christmas without Queen Elizabeth, we’re told.

Insiders say a plan was drawn up to deal with the explosive revelations expected not just from Harry’s book, but also in his sit down with Anderson Cooper on CBS “60 Minutes” Sunday, which will be swiftly followed by an interview on ITV, “Good Morning America” and “The Late Show” with Stephen Colbert.

The royals and their staff racked their brains to come up with every possible story that Harry would include in his tome — and were said to be well aware he would recount his fight with William, where he claims that his brother knocked him into a dog bowl during a fight over Meghan Markle.

“He broke my necklace by grabbing me by the collar of my shirt … I fell on the dog bowl, it broke under my back and the pieces scratched me,” Harry wrote.

One highly placed insider told us: “There were undoubtedly fears about what Harry was going to write, and in particular they were worried about the highly personal moments of their lives being retold.

“The King wanted to move ahead with the traditional ‘stiff upper lip’ attitude and follow in the Queen’s famous footsteps of ‘never complain, never explain’, but the Prince of Wales argued that perhaps the family should, in fact, go on the offensive and release a statement, much in the same way he said ‘We are very much not a racist family’, but he was overruled by his father.”

The UK Daily Telegraph also confirmed the palace was on a “war footing” ahead of the book’s release, adding that after reading excerpts of the book, their worst fears were not realized.

Despite everything, The Sunday Times of London reported that William is acutely aware the royal family has to stay quiet. As one close friend of both brothers told the outlet, “He (William) won’t retaliate, he never would, because he’s dignified and unbelievably loyal. William is a sitting duck because Harry knows he isn’t going to retaliate. How many shots can you take at a sitting duck?

“It’s cruel, cowardly and so sad for William to keep taking the punches. He’s keeping quiet for the good of his family and the country.”

Harry’s book “Spare,” will be published Tuesday around the world, but embarrassingly excerpts leaked to Page Six this week before it mistakenly went on sale early in Spain before being pulled off the bookshelves.

Among his shock claims, the Duke of Sussex, 38, talks of his rift with William, 40, drags his sister-in-law Princess Kate and reveals the final words he said to his grandmother shortly after she died in September. He also tells how he and William urged their father not to marry Camilla Parker Bowles.

He also detailed the tense Sandringham summit in early 2020 where Harry tried to get his relatives to agree to a “half-in-half out” model, where he and Markle would be allowed to live out of the country and be part-time royals. Her Majesty disagreed, prompting them to quit their senior royal roles and move to California.

As Page Six revealed Saturday, William and Kate were left “reeling” by the book, but despite this, Buckingham Palace and Kensington Palace officials will not comment on the book, just like they refused to comment about the Sussexes’ Netflix show “Harry & Meghan.”

Meanwhile, we’re told that the Prince and Princess of Wales, who made a trip to Boston in December, have turned down a long list of prestigious interviews both in the United States and Britain to present their side with all proceeds going to royal charities.

King Charles — who gave a disastrous 1993 interview to Jonathan Dimbleby — in which he admitted to cheating on Princess Diana with his now-wife, Camilla Parker Bowles, is believed to have told all the family that nothing good can come from speaking out.

In a new trailer for Harry’s ITV interview with Tom Bradby, released Saturday, he revealed the “guilt” he felt over not being able to cry in front of weeping mourners at Kensington Palace after his mother’s death.

Prince Harry said that it was not until he watched his mother’s coffin being lowered into the ground on the Althorp Estate that he finally shed tears.

He also said that he thinks that William felt guilt as well about not crying alongside the crowds, saying: “Everyone knows where they were and what they were doing the night my mother died.

“I cried once, at the burial, and you know I go into detail about how strange it was and how, actually, there was some guilt that I felt, and I think William felt as well, by walking around the outside of Kensington Palace.

“There were 50,000 bouquets of flowers to our mother, and there we were shaking people’s hands, smiling. I’ve seen the videos, right, I looked back over it all. And the wet hands that we were shaking, we couldn’t understand why their hands were wet, but it was all the tears that they were wiping away.”

He adds: “Everyone thought, and felt like, they knew our mum, and the two closest people to her, the two most loved people by her, were unable to show any emotion in that moment.”

We have reached out to Buckingham Palace and Kensington Palace for comment.

A brutal bond market sell-off wreaks havoc on one of fixed income's most popular...

News - April 19, 2022 0
Things are getting pretty bad for 30-year Treasury bonds, the prices for which are plumbing depths not seen since the early days of the...

Ron DeSantis doesn’t think federal funds should be used for hurricane relief — except...

News - September 30, 2022 0
Death and destructions are not the only things Hurricane Ian brought to Florida this week. Along with the storm surge and high winds which...

What would you name a Uranus probe? The internet’s answers are about what you’d...

News - September 13, 2022 0
Earhart, Tempest or MUSE?Fans of planet Uranus have many ideas to name the next mission there, if an informal Internet poll is any indication.ExploreIGO,...
© 2022 Venture Current is a Flag Media LLC Publication. All Rights Reserved.
VC is part of the FLAG Token rewards network. Clients and partners can use FLAG Tokens for VC products and services.
VC runs 'Automatic' software. Stories posted here come from generic-topic Google news RSS feeds as well as client and partner-approved content.
If a story appears on this page that needs to be deleted due to licensing issues, please message us immediately so we can help you.