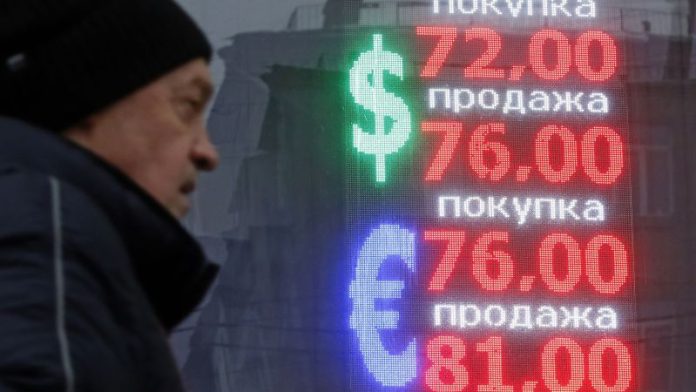 The ruble hovered below 72 to the dollar, down 18% from the start of the month, and its weakest level since late April.

After almost halving in value in the first weeks of the war, the ruble has held up remarkably well for most of the year, trading within a narrow range. The ruble has been helped by measures from Russia’s central bank, which more than doubled interest rates at the start of the war, introduced capital controls, and forced exporters to convert 80% of their earnings into rubles, artificially creating demand for the currency. It later rolled back some of those policies as the exchange rate stabilized.

But with the price of oil, Russia’s biggest export, down by about a third from its June peak, and an EU embargo on seaborne oil, and Western price cap mechanisms now in place, Russia’s oil export revenues are likely to fall. This means less foreign currency to prop up the ruble.

The International Energy Agency said this month that Russian oil export revenues fell by $700 million in November because of falling prices.

President Putin signed a decree this week banning oil sales to countries or entities complying with the price cap, and his deputy Prime Minister warned the country may have to cut oil production by up to 7% in 2023.

“The point is, our imports are increasing” he told Russian state TV in an interview that aired on Thursday. “Our exchange rate is floating and depends on the situation with the balance of payments.”

He said Russia’s new budget rule in force from next year would allow it to use excess oil revenues to stabilize the currency if necessary.

News - January 16, 2023 0
With most of us hoping for better financial prospects in 2023, it's important to acknowledge just how brutal 2022 was for Americans and their...

News - May 19, 2022 0
The New York City Department of Health and Mental Hygiene said on Thursday it’s investigating a possible case of monkeypox in the five boroughs. According...

Russia to block Instagram in widening of media crackdown

News - March 11, 2022 0
Russia has announced it will cut off access to Instagram and launch a criminal investigation into its parent company Meta, adding to the country’s...
© 2022 Venture Current is a Flag Media LLC Publication. All Rights Reserved.
VC is part of the FLAG Token rewards network. Clients and partners can use FLAG Tokens for VC products and services.
VC runs 'Automatic' software. Stories posted here come from generic-topic Google news RSS feeds as well as client and partner-approved content.
If a story appears on this page that needs to be deleted due to licensing issues, please message us immediately so we can help you.