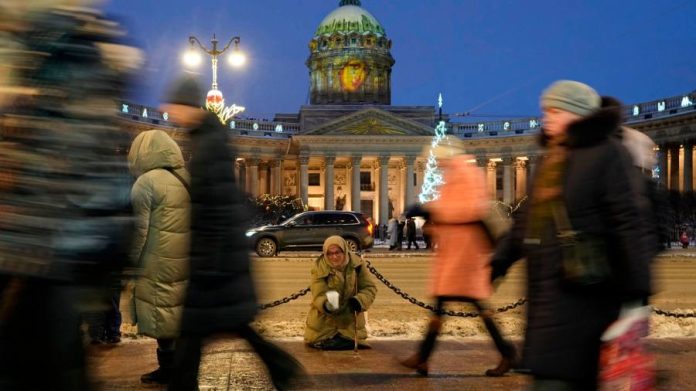 Nearly half of top foreign policy experts think Russia will become a failed state or break up by 2033, while a large majority expects China to try and take Taiwan by force, according to a new survey by the Atlantic Council that points to a decade of global tumult ahead.

Forty-six per cent of the 167 experts responding to the think-tank said Russia’s failure or break-up could happen in the next 10 years. In a separate question, 40 per cent pointed to Russia as a country they expected to break up for reasons including “revolution, civil war or political disintegration” over that time.

“Ukraine clearly highlights the possibility of internal problems for Russia, and the possibility that the war itself might have boomerang effects for not only its leadership, but for the country as a whole,” said Peter Engelke, the Atlantic Council’s deputy director of foresight who helped to design and interpret the survey.

Western officials say Russia has been significantly weakened by its invasion of Ukraine 11 months ago, including by sanctions and export controls. Economists believe Russia’s productive capacity is steadily degrading as a result of the punitive measures, pushing the country back decades.

Russian president Vladimir Putin has begun to publicly acknowledge that Moscow is facing setbacks in Ukraine and that the conflict will take a long time. The US and its western allies have pledged to support Ukraine for as long as it takes, with all parties making plans for the war to continue for years.

Even as Europe is seeing the biggest land conflict since the second world war, a majority of the experts polled said they did not believe Russia and Nato would directly engage in a military conflict in the next decade.

However, backing increasingly dire warnings by US officials that China will launch a military offensive to retake Taiwan, 70 per cent of respondents predicted Beijing would do so in the next 10 years.

American military commanders have pointed to 2027, the 100th anniversary of the founding of China’s People’s Liberation Army, as a possible invasion date. However, some officials have intensified their warnings about Beijing’s intentions over the past year and said that an invasion was possible before 2024.

US President Joe Biden has repeatedly said Washington will defend Taiwan from a Chinese attack, even as the US has historically tried to avoid spelling out what it would do to deter both sides from acting.

Other findings add to a picture of global disarray. Nearly 90 per cent of respondents believe at least one additional country will obtain nuclear weapons by 2033. Sixty-eight per cent of them said Iran would be most likely to obtain a nuclear weapon, coming as prospects for reviving a nuclear deal between six world powers and Iran have become increasingly dim. Injecting some optimism though, 58 per cent of the experts said they believed nuclear weapons would remain unused over the next 10 years.

The foreign policy experts also predicted some degree of American decline. While 71 per cent of those polled predicted the US would continue to be the world’s dominant military power by 2033, just 31 per cent believe that the US will be the number one diplomatic power and 33 per cent the pre-eminent economic one.

News - April 13, 2022 0
Ukraine says ship damaged in missile strikeAll crew evacuated - InterfaxMoskva missile cruiser usually has crew of 500April 14 (Reuters) - The flagship of...
© 2022 Venture Current is a Flag Media LLC Publication. All Rights Reserved.
VC is part of the FLAG Token rewards network. Clients and partners can use FLAG Tokens for VC products and services.
VC runs 'Automatic' software. Stories posted here come from generic-topic Google news RSS feeds as well as client and partner-approved content.
If a story appears on this page that needs to be deleted due to licensing issues, please message us immediately so we can help you.