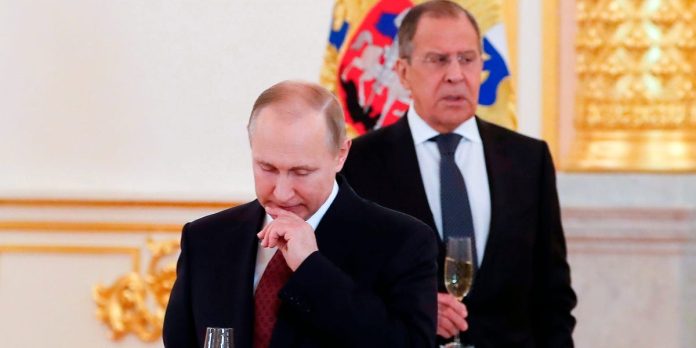 Russia was open to negotiating with Ukraine shortly after it launched its offensive last year, but the United States and other Western allies advised Kyiv against holding talks, Russia’s foreign minister claimed on Monday.

Russian Foreign Minister Sergey Lavrov blamed the West for the stalled talks during a visit to Pretoria, South Africa, as part of a Russian push to strengthen ties with the African nation, per The Washington Post.

“It is well known that we supported the proposal of the Ukrainian side to negotiate early in the special military operation and by the end of March, the two delegations agreed on the principle to settle this conflict,” said Lavrov, per The Post.

“It is [also] well known and was published openly that our American, British, and some European colleagues told Ukraine that it is too early to deal, and the arrangement which was almost agreed was never revisited by the Kyiv regime,” he added.

In the weeks after Russian President Vladimir Putin launched his invasion of Ukraine, a number of fruitless peace talks took place as Russia continued to bomb Ukrainian cities.

Ukrainian negotiators agreed to a neutral status if Ukraine received adequate security guarantees from the West, bowing to a major Russian demand. Meanwhile, Moscow agreed to “fundamentally cut back” military activity near Kyiv and Chernihiv, which Russian Deputy Minister of Defence Alexander Fomin said was to “increase mutual trust.”

However, Zelenskyy expressed some skepticism, saying: “Ukrainians are not naive people.”

The talks did not lead to peace, or even a ceasefire, with Russian President Vladimir Putin saying on April 12 that negotiations had reached a “dead end.”

Lavrov told Russian media in April that a decision to halt talks was taken on the advice of American and British “colleagues” — a line he has since maintained.

According to Ukrainska Pravda, a Ukrainian media outlet, the talks were called off after Zelenskyy was visited by Johnson, then the UK’s prime minister, who advised that Putin was a war criminal who should not be negotiated with.

At the time Ukraine was also gathering evidence of war crimes following the Bucha massacre in late March, according to the media outlet.

Neither Russia nor Ukraine have shown signs that a diplomatic resolution to the war is now forthcoming.

The New York Times reported in December that both Ukraine and Russia have insisted that they are willing to engage in peace talks, but both are offering hard-line terms for sitting down at the negotiating table.

Ukraine proposed a peace summit in February 2022, based on the principles of a 10-point peace plan, but said it would only allow Russia to participate if it takes part in a war-crimes tribunal, per the Associated Press.

Russia, meanwhile, has said that Ukraine would need to accept Russia’s annexation of Luhansk, Donetsk, Kherson, and Zaporizhia as part of any peace agreement.

News - December 22, 2021 0
Credit President Joe Biden with not hitting the panic button in his speech on the Omicron wave — but that’s about it. The prez rightly...

News - December 4, 2021 0
An 80-year-old woman has struck a nerve in China for her short videos depicting her own loneliness in her old age. Source

News - May 18, 2022 0
Gas installation is pictured at the Cavern Underground Gas Storage (CUGS) Kosakowo facility, near Debogorze, Poland April, 30. 2022. Picture taken April 30, 2022....
© 2022 Venture Current is a Flag Media LLC Publication. All Rights Reserved.
VC is part of the FLAG Token rewards network. Clients and partners can use FLAG Tokens for VC products and services.
VC runs 'Automatic' software. Stories posted here come from generic-topic Google news RSS feeds as well as client and partner-approved content.
If a story appears on this page that needs to be deleted due to licensing issues, please message us immediately so we can help you.