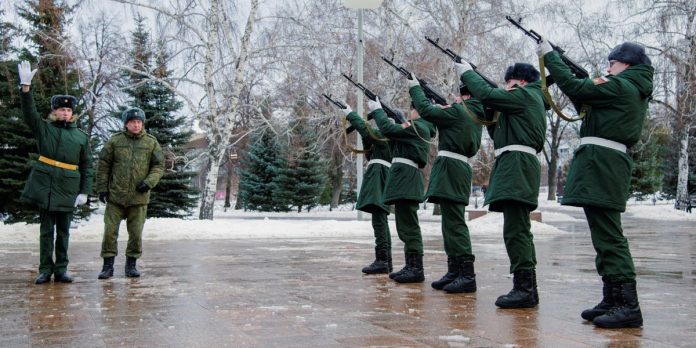 After a Ukrainian strike killed scores of Russian soldiers in Donetsk, Moscow pinned the blame on cellphone use by its forces, but a war reporter honored by Russian President Vladimir Putin pushed back on those claims, saying that the Kremlin’s story is “not very convincing.”

“I rarely say this — but this is the case when it would probably be better to remain silent, at least until the end of the investigation. As such it looks like an outright attempt to smear the blame,” Semyon Pegov, who was recently awarded the Order of Courage by the Russian leader after he was injured by an anti-personnel mine in Ukraine, said on Telegram, NBC News reported.

Over the weekend, Ukrainian forces used a US-provided High Mobility Artillery Rocket System (HIMARS) to deliver a devastating strike on Russian positions in the occupied Ukrainian city of Makiivka.

The Kremlin initially said 63 of its soldiers were killed in the attack but later updated the death toll to 89 troops in a rare disclosure of its battlefield losses. Ukraine’s military, meanwhile, offered a much higher figure and said as many as 400 Russian troops were killed with another 300 injured. Neither estimate could be independently verified.

The deadly attack immediately triggered widespread criticism and calls for punishment of Moscow’s military leadership among prominent government officials, lawmakers, and military bloggers. On Tuesday, Russia’s defense ministry blamed its own soldiers for the attack, saying their cellphone usage allowed Ukraine to determine their location and launch the strike.

“It is already obvious that the main reason for what happened was the switching on and massive use — contrary to the prohibition — by personnel of mobile phones in a reach zone of enemy weapons,” the defense ministry said, referring to regulations prohibiting cellphone usage by Russian troops.

“The story with ‘mobiles’ is not very convincing,” Pegov countered on social media. He said Russian forces could have been detected by drones or Ukrainian troops could have been tipped off by an informant, CNN reported. He also said that the death toll was likely higher than acknowledged.

A top Ukrainian military official also dismissed the Kremlin’s explanation, saying that mobile phones were not the reason for the strike and high number of casualties.

“Of course, using phones with geolocation is a mistake. But it is clear that this version looks a bit ridiculous,” said Serhii Cherevatyi, a spokesman for the Eastern Group of Ukraine’s Armed Forces, adding that the Russians were “putting the blame on each other.”

Cherevatyi said Russian cellphone use “was not the main reason” for the strike. “The main reason was that they were unable to covertly deploy these personnel. And we took advantage of that, having detected the target powerfully and destroyed it,” he said.

Battlefield cellphone usage has been a problem for the Russian military throughout its 10-month-long war in Ukraine, as the data has often been used to pinpoint the locations of Putin’s troops. A top US Marine general said recently that the war has highlighted a need for military leadership to monitor the future use of such technology.

That said, Russian anger over the strike has stemmed from reports that Putin’s troops were stationed near ammunition storage in Makiivka. Britain’s defense ministry shared in a Wednesday intelligence update that the damage points to a “realistic possibility” that ammunition was stored near where Russian troops had been staying and that detonation of the stored ammo caused secondary explosions.

“The Russian military has a record of unsafe ammunition storage from well before the current war, but this incident highlights how unprofessional practices contribute to Russia’s high casualty rate,” the British defense ministry said.

9/11 showed us the resilience of New York City

EU to work with allies on possible Russia sanctions over Ukraine

News - December 16, 2021 0
EU leaders have agreed to co-ordinate with allies over potential sanctions against Russia in the event of an invasion of Ukraine, and charged the...

News - January 22, 2023 0
ChatGPT has alarmed high-school teachers, who worry that students will use it—or other new artificial-intelligence tools—to cheat on writing assignments. But the concern doesn’t stop...

Personal finance is a hit on TikTok

News - January 27, 2022 0
VIDEOS TAGGED #moneytok have had 10.6bn views on TikTok—more than #tacotuesday, #gossip and #cookingtiktok. Creators can use the tag to signal that their posts...
© 2022 Venture Current is a Flag Media LLC Publication. All Rights Reserved.
VC is part of the FLAG Token rewards network. Clients and partners can use FLAG Tokens for VC products and services.
VC runs 'Automatic' software. Stories posted here come from generic-topic Google news RSS feeds as well as client and partner-approved content.
If a story appears on this page that needs to be deleted due to licensing issues, please message us immediately so we can help you.