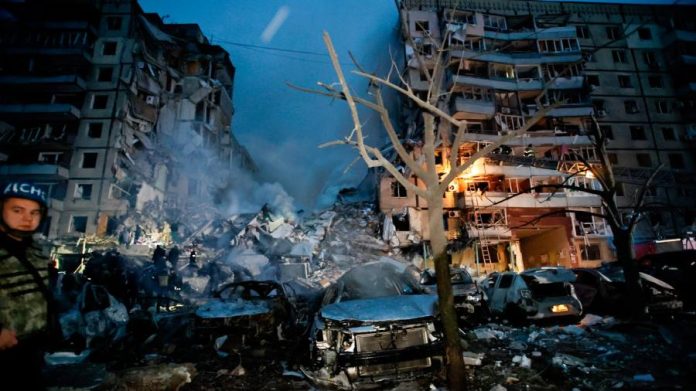 Russia has hit cities across Ukraine with a sustained missile barrage, causing a nine-storey residential building in the central city of Dnipro to partially collapse.

The number of civilians killed and wounded in the strike on the industrial city of more than 1mn people was not immediately clear. As rescuers sought survivors in the building’s rubble the region’s governor Valentyn Reznichenko said five people had been confirmed killed and 39 injured, including six children.

Dozens of missile strikes were reported on Saturday in cities throughout Ukraine, including the capital Kyiv, Kharkiv in the east, as well as the regions of Odesa in the south and Lviv in the far west.

Kyrylo Tymoshenko, deputy head of Ukrainian president Volodymyr Zelenskyy’s administration, said 28 residential buildings in the Kyiv region were damaged but there were no casualties.

Russia began to target Ukraine’s power infrastructure in the autumn after its invading forces were pushed out of large parts of the country’s eastern and southern regions and has resulted in rolling electricity and heating blackouts.

In a social media post showing rescue workers at the scene, Zelenskyy said: “Eternal memory to all those whose lives were taken by Russian terror!”.

Ukrainian officials said on Saturday that fighting for the eastern town of Soledar continued, contradicting Russian claims that their forces had captured it in recent days.

“Each barrage of missiles further exhausts Russian stocks. However, they are still able to produce new ones. We can and must kill their missile and drone industry with a mass sanctions strike!” Kuleba tweeted.

Ukraine’s air defence systems have intercepted the majority of incoming Russian missiles and kamikaze drones in recent months, including during massive barrages that included 80 or more missiles fired in a single day.

But Ukraine has pleaded for the US and European countries to provide modern air defences as its Soviet-era S300 and Buk surface-to-air missile stocks are rapidly depleting.

Kyiv has recently received some Nasam systems from the US and Norway, as well as one Iris-T unit from Germany. The US announced late last year that it would provide longer range Patriot systems which can intercept ballistic missiles, a capability Ukraine does not currently have.

In a phone call to Zelenskyy on Saturday, UK prime minister Rishi Sunak repeated his country’s promise made early this year to provide Ukraine with Challenger 2 tanks.

Officials from Poland and Finland recently announced that they intended to provide Ukraine with Leopard tanks produced by Germany. But Berlin has not yet signalled its approval of such supplies from third parties.

News - December 24, 2021 0
Wall Street delivered another strong year for investors in 2021, as a resurgence in consumer demand fueled by the reopening of the global economy...

News - January 30, 2022 0
Spotify said it would add “content advisory” warnings to podcasts that discussed Covid-19, as the streaming service responded to a backlash against its popular...

News - January 19, 2023 0
Apple is reportedly on the hunt for a manufacturer to supply a periscope lens that could feature on the iPhone 15 Pro Max. And...

7 important things we just learned about the Google Pixel 7

Moscow’s mood ahead of Victory Day mixes anxiety and resilience

News - May 8, 2022 0
May 8 (Reuters) - Moscow residents appeared anxious but resilient as the country prepared on Sunday for its annual commemoration of the Soviet victory...
© 2022 Venture Current is a Flag Media LLC Publication. All Rights Reserved.
VC is part of the FLAG Token rewards network. Clients and partners can use FLAG Tokens for VC products and services.
VC runs 'Automatic' software. Stories posted here come from generic-topic Google news RSS feeds as well as client and partner-approved content.
If a story appears on this page that needs to be deleted due to licensing issues, please message us immediately so we can help you.