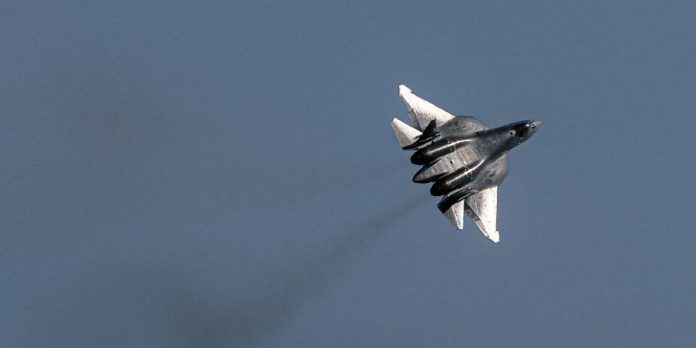 Russia is holding back on using its most advanced fighter jets over Ukrainian airspace because it’s scared they will get shot down, British intelligence said on Monday.

In its latest intelligence update, the UK’s Ministry of Defence said Moscow has “almost certainly” used Su-57 Felon fighter jets to conduct missions against Ukraine since at least June 2022.

“These missions have likely been limited to flying over Russian territory, launching long-range air-to-surface or air-to-air missiles into Ukraine,” the brief said.

Russia is keeping its jets on home soil because it is “avoiding the reputational damage, reduced export prospects, and the compromise of sensitive technology which would come from any loss of Felon over Ukraine,” the brief added.

The twin-engine and single-seat aircraft is Russia’s most advanced fifth-generation supersonic combat jet.

For an aircraft to be considered fifth-generation, it must possess specific technical characteristics, such as the ability to fly at supersonic speeds without afterburners.

Five of the jets are currently housed at the only known Felon air base in Russia, which is located in the southern region of Akhtubinsk, according to a satellite image taken on December 25, 2022, and cited by the MoD.

Russian Defense Minister Sergei Shoigu said in August last year that the Felon had already been used “brilliantly” in combat since Russia’s invasion, although there was little evidence at the time that this was the case.

Russia’s wary tactic is indicative of its continued risk-averse approach to employing its air force in the war against Ukraine, given the risk of significant losses.

Russia has lost more than 280 airplanes since the beginning of its full-scale invasion of Ukraine, according to an update from the General Staff of Ukraine’s Armed Forces on January 9.

News - October 28, 2021 0
Joe Biden announced a framework agreement with Democratic leaders on his US economic agenda, in an effort to stoke political momentum for his $1.75tn...

News - February 18, 2022 0
Elon Musk’s SpaceX has announced a 10-for-1 split of its private stock in a company-wide email obtained by CNBC. At the most recent valuation, SpaceX...

News - July 9, 2022 0
This copy is for your personal, non-commercial use only. Distribution and use of this material are governed by our Subscriber Agreement and by copyright law....

News - October 13, 2022 0
The Meta Connect 2022 keynote event took place yesterday, with Facebook creator Mark Zuckerberg revealing new details about his controversial metaverse vision. However, viewers...
© 2022 Venture Current is a Flag Media LLC Publication. All Rights Reserved.
VC is part of the FLAG Token rewards network. Clients and partners can use FLAG Tokens for VC products and services.
VC runs 'Automatic' software. Stories posted here come from generic-topic Google news RSS feeds as well as client and partner-approved content.
If a story appears on this page that needs to be deleted due to licensing issues, please message us immediately so we can help you.