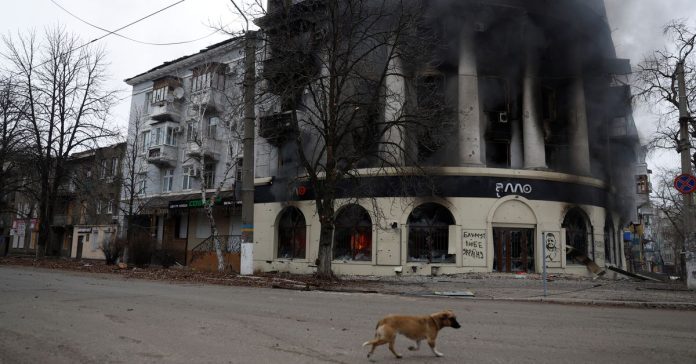 KYIV/BAKHMUT, Ukraine, Dec 28 (Reuters) – Russia retaliated on Tuesday against a price cap on its oil imposed by Western countries, while its forces were involved in heavy fighting around the bombed-out ghost town of Bakhmut in eastern Ukraine.

Despite an intensification in the fighting the frontline in eastern Ukraine remains little changed, with neither side making any major advances, said Britain’s Ministry of Defence and Ukraine military analysts.

Moscow will ban oil sales to countries that abide by the price cap that was imposed on Dec. 5, President Vladimir Putin decreed.

The price cap, unseen even in the times of the Cold War between the West and the Soviet Union, is aimed at crippling Moscow’s military efforts in Ukraine – without upsetting markets by actually blocking Russian supply.

Under the cap, oil traders who want to retain access to Western financing for such crucial aspects of global shipping as insurance must promise not to pay above $60 per barrel for Russian seaborne oil.

That is close to the current price for Russian oil, but far below the prices at which Russia was able to sell it for much of the past year, when windfall energy profits helped Moscow offset the impact of financial sanctions.

The decree from Putin, published on a government portal and the Kremlin website, was presented as a direct response to “actions that are unfriendly and contradictory to international law by the United States and foreign states and international organisations joining them”.

The Kremlin ban would halt crude oil sales to countries participating in the price cap from Feb. 1-July 1, 2023. A separate ban on refined oil products such as gasoline and diesel would take effect on a date to be set by the government. Putin would have authority to overrule the measures in special cases.

Russia is the world’s second largest oil exporter after Saudi Arabia, and any actual disruption to its sales would have far-reaching consequences for global energy supplies.

On the ground in eastern and southern Ukraine, Russian forces again shelled and bombed towns and cities on Tuesday. After a number of dramatic Ukrainian gains in the autumn, the war has entered a slow, grinding phase as bitter winter weather has set in at the front.

The heaviest fighting has been around the eastern city of Bakhmut, which Russia has been trying for months to storm at huge cost in lives, and further north in the cities of Svatove and Kreminna, where Ukraine is trying to break Russian defensive lines.

In Bakhmut, home to 70,000 people before the war and now in ruins, Reuters reporters saw fires burning in a large residential building, while debris littered the streets and most buildings had had their windows blown out.

“Our building is destroyed. There was a shop in our building, now it’s not there anymore,” said Oleksandr, 85, adding he was the only remaining resident there.

Nearby, 73-year-old Pilaheia said she had long got used to the “constant explosions”.

Britain’s Ministry of Defence said in an update: “Russia continues to initiate frequent small-scale assaults in these areas (of Bakhmut and Svatove), although little territory has changed hands.”

“There has been very little change in terms of the front line, but pressure from the enemy has intensified, both in terms of the numbers of men and the type and quantity of equipment,” Zhdanov said.

In Kherson, abandoned by Russian troops last month, Russian forces shelled the maternity wing of a hospital, said Kyrylo Tymoshenko, Ukrainian President Volodymyr Zelenskiy’s deputy chief of staff, on Telegram. No one was hurt and the staff and patients had been moved to a shelter, Tymoshenko said.

Reuters was unable to immediately verify the reports.

The Kremlin’s military campaign had set out to subdue Ukraine within days of a February invasion, but its forces were defeated on the outskirts of Kyiv in the spring and forced to flee other areas in the autumn.

Putin has responded by summoning hundreds of thousands of reservists for the first time since World War Two to fight in his “special military operation”.

Putin has repeatedly spoken of a desire for peace talks in comments in recent days. But his foreign minister Sergei Lavrov made clear Moscow still has a list of preconditions, including that Ukraine recognise Russia’s conquest by force of around a fifth of Ukrainian territory, which it says it has annexed.

Kyiv says it is winning the war and will never agree to relinquish land.

In a late night address on Tuesday, Zelenskiy said a meeting of the military command had “established the steps to be taken in the near future.”

“We will continue preparing the armed forces and Ukraine’s security for next year. This will be a decisive year. We understand the risks of winter. We understand what needs to be done in the spring,” he said.

Jamie Dimon says rates will rise above 5% because there is still ‘a lot...

News - September 5, 2021 0
Police in Montenegro have fired teargas at protesters as the new head of the Serbian Orthodox church in the country arrived by helicopter for...

News - June 20, 2022 0
As the Russia-Ukraine war enters its 117th day, we take a look at the main developments.Here are the key events so far on Monday,...
© 2022 Venture Current is a Flag Media LLC Publication. All Rights Reserved.
VC is part of the FLAG Token rewards network. Clients and partners can use FLAG Tokens for VC products and services.
VC runs 'Automatic' software. Stories posted here come from generic-topic Google news RSS feeds as well as client and partner-approved content.
If a story appears on this page that needs to be deleted due to licensing issues, please message us immediately so we can help you.