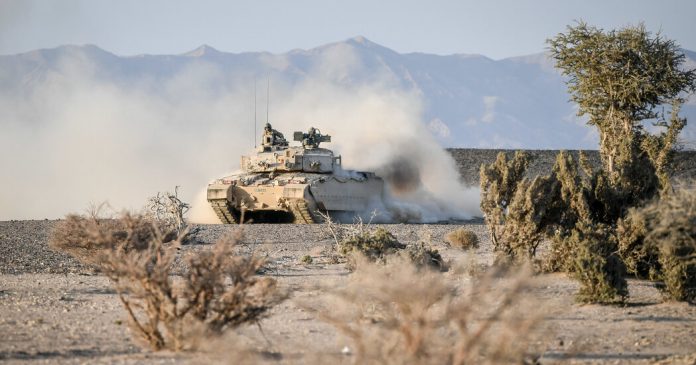 A series of explosions rang out in Kyiv, the Ukrainian capital, on Saturday morning after Russian strikes, jolting residents from a relative quiet that had taken hold over the last two weeks during a festive holiday period in the country.

In a rare occurrence, some of the blasts were heard minutes before air-raid sirens sounded in the city, alarming people used to receiving early warnings of missiles or drones spotted by Ukrainian forces and giving them no time to scramble to underground shelters before the attacks.

The Russian attack most likely involved ballistic missiles, which is why the air-raid warnings came late, according to Col. Yuriy Ihnat, a spokesman for the Ukrainian Air Force. Ballistic missiles are much faster and harder to shoot down than either drones or cruise missiles.

The Ukrainian president’s office said the blasts were part of an “attack on critical infrastructure facilities” in the city. No casualties were immediately reported, but as the morning went on it became clear that a number of sites across the city had been hit. Four missiles also hit an industrial area in the northeastern city of Kharkiv, the mayor, Ihor Terekhov, said in a statement posted to Telegram. Mr. Terekhov said that the missiles targeted infrastructure sites.

The strikes shattered a relative morning calm as Ukraine was celebrating Orthodox New Year, or Malanka, a traditional holiday that is aligned with the older Julian calendar rather than the newer Gregorian one.

When the air-raid alert lifted in Kyiv at around 11:30 a.m., residents slowly made their way back out on the streets, with many streaming out of the subway stations in which they had sought shelter to continue on with their day.

Oksana Koloniets and Anna Chuplykhina, who were visiting Kyiv, were alarmed to hear explosions before an air-raid siren had time to sound.

“You always know that after the air raid alarm, there are going to be some troubles,” said Ms. Chuplykhina, 45. “You don’t just feel anxiety, but also pain.”

Ms. Koloniets, 50, said the timing of the strikes — during a period of celebration for the Orthodox New Year — only added to worries that had persisted for many in the capital in recent weeks.

“I think it’s one of the elements of intimidation — to repress this festive mood,” she said, adding, “I am worried for people’s lives. For ordinary Ukrainians whose lives could be taken at any moment.”

Russian forces have intermittently targeted Kyiv and other areas of Ukraine far from the front lines since the start of October with large-scale missile and drone attacks that have mostly targeted electricity infrastructure and other key services.

The attacks have crippled Ukraine’s power grid and left the country grappling with rolling blackouts in order to deal with the electricity shortages.

The Biden administration said last month it would supply Ukraine with a Patriot missile battery, the most advanced American air defense system, which — unlike others used by Ukraine — can shoot down ballistic missiles flying at several times the speed of sound. Germany is also sending Ukraine a Patriot missile system from its stockpiles.

Halyna Polishchuk, 59, was heading into Kyiv on a bus to visit the Museum of Natural History on when the explosions hit. She hurried into a subway station and took shelter for about an hour before emerging with the crowds as the air-raid alert lifted.

She said the attack hadn’t changed her plans to go see an exhibition of rare violets. Ms. Polishchuk is an avid gardener, and grows violets of her own at home.

“I am still going there,” she said. “Despite the war, despite everything, one wishes for something good.”

While Ms. Polishchuk described the morning strikes as scary, she said she was determined to carry on as normally as possible.

“We won’t be broken,” she said. “Ukraine will be flowering, not just my violets!”

News - July 5, 2022 0
Boris Johnson has appointed Nadhim Zahawi, the former education secretary, to be the new UK chancellor after the resignation of Rishi Sunak on Tuesday.Zahawi...

What falling inflation could mean for your stock portfolio

News - December 1, 2022 0
The past year hasn’t been kind to investors. With the highest inflation in four decades forcing the Federal Reserve to jack up interest rates...

News - August 14, 2022 0
A global rebound in stocks looks set to support Asian bourses as trading gets underway Monday ahead of key reports on China’s economic activity...

News - August 18, 2021 0
Former Vice President Mike Pence claimed Tuesday that President Joe Biden reneged on the cease-fire deal his predecessor, former President Donald Trump, agreed with...
© 2022 Venture Current is a Flag Media LLC Publication. All Rights Reserved.
VC is part of the FLAG Token rewards network. Clients and partners can use FLAG Tokens for VC products and services.
VC runs 'Automatic' software. Stories posted here come from generic-topic Google news RSS feeds as well as client and partner-approved content.
If a story appears on this page that needs to be deleted due to licensing issues, please message us immediately so we can help you.