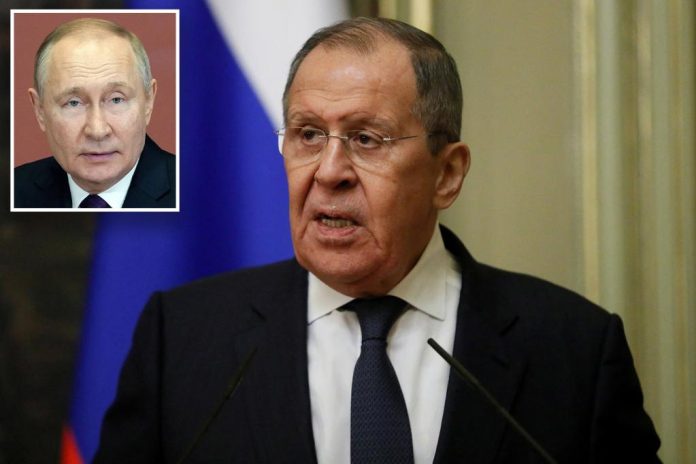 Foreign Minister Sergey Lavrov talked about the alleged assassination plan in a wide-ranging interview with the state new agency Tass.

“Some ‘unnamed officials’ from the Pentagon essentially threatened to carry out a ‘decapitation strike’ against the Kremlin,” he said. “Basically, we are talking about a threat to physically eliminate the head of the Russian government.”

Lavrov cautioned: “If such ideas are, in fact, being considered by someone, that someone should very carefully think of the possible consequences of such plans.”

Lavrov’s comments refer to a Pentagon officer speaking on condition of anonymity telling Newsweek in September that the Department of Defense was considering assassinating Putin in the heart of the Kremlin in response to a potential nuclear strike by Russia.

At the time, the Russian Embassy in Washington, DC, slammed the Pentagon official’s statement as “delusional” and “reckless.”

In his interview with Tass, Lavrov also accused the US and its NATO allies, which have sent tens of billions of dollars worth of military aid to Ukraine since the start of the war, of seeking to defeat Russia on the battlefield as a way of “significantly weakening or even destroying” the country.

“The actions of the countries of the collective West and (Ukrainian President Volodymyr) Zelensky under their control confirm the global nature of the Ukrainian crisis,” Lavrov said.

The hawkish Putin crony reiterated that Russia and the US cannot maintain normal relations, blaming the administration of President Biden.

“It is objectively impossible to maintain normal communication with the Biden administration, which declares the infliction of a strategic defeat on our country as a goal,” Lavrov said.

Putin has repeatedly floated the idea of peace talks in recent days, but his top diplomat made it clear that Moscow has several preconditions, including that Ukraine recognize Russia’s conquest of around a fifth of its territory.

“Our proposals for the demilitarization and denazification of the territories controlled by the regime, the elimination of threats to Russia’s security emanating from there, including our new lands … are well known to the enemy,” Tass quoted Lavrov as saying. “All that is left is: Fulfill them for your own good, or the issue will be decided. The point is simple: [Fulfill] them for your own good. Otherwise, the Russian army will decide the issue.”

When asked how long the conflict in Ukraine, already in its 11th month, would last, Lavrov said it was entirely up to Kyiv and its Western allies.

“The ball is on the side of the (Ukrainian) regime and its backers in Washington,” Lavrov said. “They could at any moment stop their pointless resistance.”

News - May 18, 2022 0
While we may not be able to control the day-to-day action in the market, what we can control is how we react to it. Source

A 30-Year-Old Millionaire Changed the Way I Handle Money

News - October 7, 2022 0
The UN Human Rights Council has narrowly voted against holding a debate on China’s conduct in the north-eastern Xinjiang region, blocking discussion of a...

What is the Nord Stream 2 pipeline? – WHIO TV 7 and WHIO Radio

News - December 15, 2021 0
UK retail, manufacturing, travel and healthcare companies have warned about staff shortages as rising numbers of workers call in sick with Covid-19 as the...
© 2022 Venture Current is a Flag Media LLC Publication. All Rights Reserved.
VC is part of the FLAG Token rewards network. Clients and partners can use FLAG Tokens for VC products and services.
VC runs 'Automatic' software. Stories posted here come from generic-topic Google news RSS feeds as well as client and partner-approved content.
If a story appears on this page that needs to be deleted due to licensing issues, please message us immediately so we can help you.