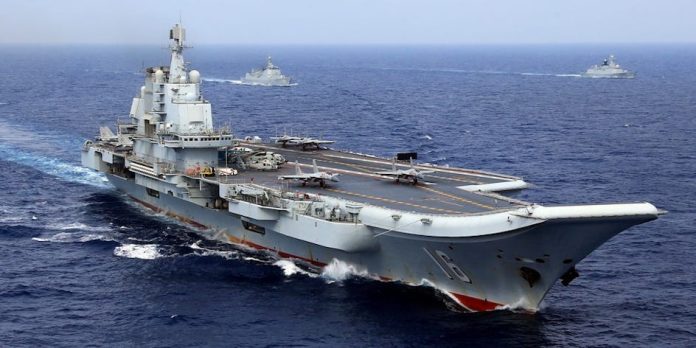 Russia’s only aircraft carrier, Admiral Kuznetsov, is in such bad shape that it may easier to buy a replacement than to fix it.

In a sign of how low Russia’s military has sunk, a Russian politician has suggested doing so by buying a Soviet-designed carrier that was sold to China 25 years ago.

Admiral Kuznetsov has never been lucky. Launched in 1985, the 60,000-ton vessel has suffered engine breakdowns, multiple fires, and bizarre shipyard accidents. In 2012, it had to be towed to port by a tugboat after losing propulsion off the French coast.

Sidelined for overhaul since 2017, Kuznetsov was damaged in 2018 by a falling dockyard crane that left a 200-square-foot hole in its flight deck. This was followed in December 2019 by a major fire that killed at least one person while the ship was under refit in Murmansk. Most recently, a fire in December caused what the Russian government called “minor” damage.

Kuznetsov is now in such bad shape that can neither move under its own power nor be towed, for fear that the ship might capsize, according to Ukrainian media.

“When the diving teams examined the ship’s hull, it was found that the metal structures below the third deck were subjected to significant corrosion,” RBC-Ukraine said, according to a translation. “The holds are completely filled with muddy water, which makes it impossible to examine the ship from the inside in detail.”

At best, the carrier seems unlikely to return to service in 2024 — which was already several years behind schedule.

Meanwhile, Sergey Karginov, a Russian lawmaker who sits on the Duma’s Far East and Arctic committee, has proposed a novel solution: buy the ex-Soviet aircraft carrier Varyag from China.

Varyag, a sister ship to Admiral Kuznetsov, was still under construction when the Soviet Union dissolved in 1991. When the ships of the Soviet Black Sea Fleet were split between Russia and Ukraine, the Ukrainians took possession of Varyag. Ukraine then sold the unfinished vessel for $20 million to a Chinese buyer who claimed it would be converted into a floating casino.

After nearly sinking while being towed to China, Varyag ended up in a naval shipyard where it was outfitted for its original mission. It became Liaoning, China’s first aircraft carrier.

Commissioned in 2012, Liaoning now has an air wing of 40 jets and helicopters. To compound the strange tale, Liaoning carries the J-15 fighter, an unlicensed Chinese copy of Russia’s Su-33 carrier jet.

China acquired an Su-33 prototype from Ukraine and then reverse-engineered it to develop the J-15. In a bit of poetic justice, China’s copies had a habit of crashing, which Russian media gleefully pointed out.

Nonetheless, Liaoning was the nucleus for China’s emerging carrier fleet. Its navy commissioned a second carrier — the 60,000-ton Shandong, built in China — in 2019.

Next was China’s first domestically designed carrier, Fujian, launched in 2022. The 80,000-ton Fujian is closer in size and capabilities to US Navy nuclear-powered carriers.

With China desperately needing carrier-qualified pilots for what may eventually be a fleet of a half-dozen carriers, Liaoning is now relegated to being a training ship.

Karginov, a member of Russia’s right-wing Liberal Democratic Party, suggested the repurchased Liaoning be renamed after party leader Vladimir Zhirinovsky and be made the new Black Sea Fleet flagship.

“The ship was supposed to become one of the main ones in the USSR,” Karginov said, according to a translation of his remarks. “After the collapse of the country, Ukraine preferred to sell it for a few bottles of vodka, at the price of scrap metal.”

Perhaps Karginov is mocking Russia’s military decline, but his idea is no crazier than Russia buying any other carrier.

Historically, Russia has been a continental power whose strength was its massive army (as has China). The Soviets did build aircraft-carrying ships, but their role was different from that of US Navy carriers. Russia’s challenge now isn’t projecting naval airpower into the Mediterranean or the Pacific. It’s defeating Ukraine — or at least holding off fierce Ukrainian counterattacks.

Russia’s air and naval power have been remarkably unhelpful so far during the war in Ukraine. Its jets have mostly been relegated to long-range attacks, and its warships have been less active since the sinking of Moskva, the Black Sea Fleet flagship.

A 40-year-old aircraft carrier in the Black Sea won’t provide much value. The money would be better spent on new missiles and drones, which have proven effective in bombarding Ukrainian infrastructure. It’s a little late for Russia to become a carrier power.

Michael Peck is a defense writer whose work has appeared in Forbes, Defense News, Foreign Policy magazine, and other publications. He holds a master’s in political science. Follow him on Twitter and LinkedIn.

China factories set up ‘bubbles’ to ride out Covid lockdowns

News - March 25, 2022 0
Manufacturers across China are preparing their factories to operate as highly isolated “bubbles” that can continue to run for weeks even during tough government-ordered...

South Koreans are bemused by the global success of “Squid Game”

News - October 8, 2021 0
WHEN “SQUID GAME” appeared on Netflix in mid-September, many South Korean reviewers were underwhelmed by the home-grown survival drama. They found the characters clichéd,...

News - November 25, 2022 0
The secret to Hollywood, explains one of America’s most prominent media executives, is to understand it like an “old money town” run by half...

News - November 17, 2022 0
With two chancellors effectively at the helm, the Autumn Statement was always going to be taxing. But have they really targeted the pain on...

News - October 5, 2021 0
Apple is commemorating its co-founder and former CEO Steve Jobs’ death with a new short film and a personal statement from the...
© 2022 Venture Current is a Flag Media LLC Publication. All Rights Reserved.
VC is part of the FLAG Token rewards network. Clients and partners can use FLAG Tokens for VC products and services.
VC runs 'Automatic' software. Stories posted here come from generic-topic Google news RSS feeds as well as client and partner-approved content.
If a story appears on this page that needs to be deleted due to licensing issues, please message us immediately so we can help you.