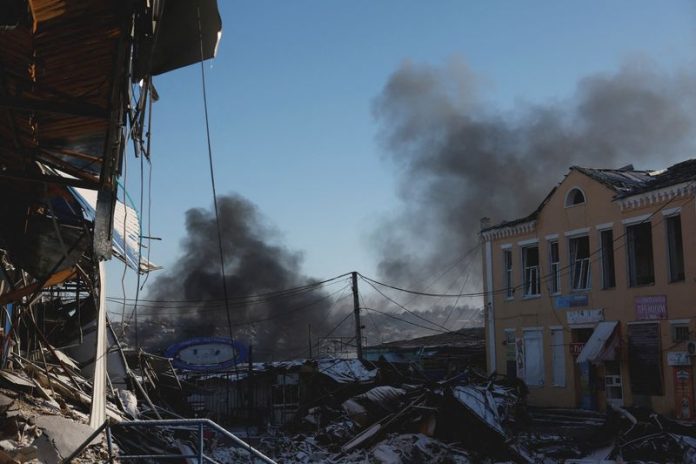 LONDON (Reuters) – The founder of Russia’s most high-profile mercenary group said on Saturday he wanted his forces and the regular Russian army to capture the small city of Bakhmut in eastern Ukraine because it possessed “underground cities” that can hold troops and tanks.

Russia’s grinding more than five months-long push to try to take Bakhmut has puzzled some Western military analysts who have said that heavy losses incurred on the Russian side and the fact that Ukraine has built defensive lines to fall back to nearby mean any Russian victory there, if it happens, would be pyrrhic.

Yevgeny Prigozhin, founder of Russia’s Wagner mercenary group which is fighting in the battle of Bakhmut, set out in detail on Saturday why he thought its capture would be significant.

“The cherry on the cake is the system of Soledar and Bakhmut mines, which is actually a network of underground cities. It not only (has the ability to hold) a big group of people at a depth of 80-100 metres, but tanks and infantry fighting vehicles can also move about.”

Prigozhin, who would likely see his political capital in Moscow boosted if Bakhmut fell to Russia given Wagner’s role in the fighting there, said stockpiles of weapons had been stored in the underground complexes since World War One.

His comments were a reference to vast salt and other mines in the area which contain more than 100 miles of tunnels and a vast underground room which has hosted football matches and classical music concerts in more peaceful times.

A White House official said on Thursday that Washington believed Prigozhin wanted to take control of salt and gypsum mines in the area for commercial reasons. It made no mention of their alleged subterranean military use.

Prigozhin, who is sanctioned in the West, cited other advantages of taking Bakhmut, calling it “a serious logistics centre” with unique defensive fortifications.

He made his comments on his press service’s Telegram channel as shellfire echoed around Bakhmut’s near-deserted streets on Saturday despite a self-declared Russian ceasefire to mark Orthodox Christmas, something Kyiv rejected as a ploy.

Bakhmut, which Russia calls Artyomovsk, is the focus of the most intense fighting in Ukraine, and Prigozhin made his comments as another Telegram channel associated with Wagner claimed Russia had captured a strategically-important settlement on Bakhmut’s outskirts.

Reuters could not independently verify the assertion.

A Ukrainian defence ministry spokesman said the town of Soledar, which is near Bakhmut and hosts a salt mine, was still under Ukrainian control despite what he described as fierce Russian assaults.

Don't Let These 4 Things Wreck Your Finances in 2023

Here are 3 proven ways to get really rich during a recession — without...

News - August 21, 2022 0
Certain politicians have dismissed the idea that the U.S. is currently in a recession. But if you look up the textbook definition, it seems...

News - November 28, 2022 0
Enthusiasts are putting their money where their mouth is. The new 2023 Toyota GR Corolla is a hot car and seemingly everyone wants one....

News - June 20, 2022 0
Aprilia MotoGP rider and 2022 championship contender Aleix Espargaro has blamed a faulty tyre for his performance in Sunday’s German Grand Prix, after he...

News - December 7, 2022 0
China has announced wide-ranging relaxations to President Xi Jinping’s contentious zero-Covid restrictions, including for the first time home quarantine, as further evidence emerged of...
© 2022 Venture Current is a Flag Media LLC Publication. All Rights Reserved.
VC is part of the FLAG Token rewards network. Clients and partners can use FLAG Tokens for VC products and services.
VC runs 'Automatic' software. Stories posted here come from generic-topic Google news RSS feeds as well as client and partner-approved content.
If a story appears on this page that needs to be deleted due to licensing issues, please message us immediately so we can help you.