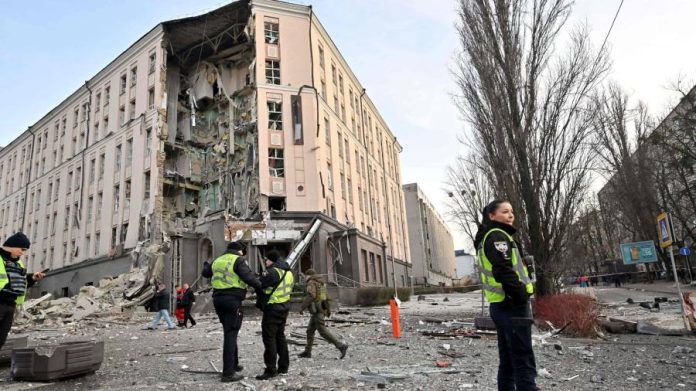 Missiles struck Kyiv on Saturday as Russian forces unleashed a barrage of air attacks across Ukraine after president Volodymyr Zelenskyy pledged to reinforce his nation’s air defences in the new year.

Most of the strikes were in two outlying areas of the capital, but one partially destroyed the Alfavito hotel in central Kyiv. Across the city, at least one person was killed and eight were wounded, one of them a Japanese journalist, Kyiv mayor Vitaliy Klitschko wrote in a post on the Telegram app.

“There is destruction. Rescuers and medics are going to the scene,” Klitschko said.

Ukrainian officials also reported Russian missile strikes in Mykolayiv in the south of the country and Khmelnytkskyi in the west.

Many Ukrainians were doing last-minute shopping before New Year’s Eve, the country’s biggest festival of the year.

The attacks are central to the Kremlin’s war strategy, which seeks to destroy critical infrastructure and erode Ukrainian morale.

Although they have led to rolling black outs — and state energy company Ukrenergo implemented temporary power cuts across much of the country on Saturday to reduce the risk of overloading the electricity grid — so far they have not damaged Ukrainians’ resolve.

“The strikes don’t really work. It’s all just part of a show for Russian domestic television in which everyone else — you, me, Ukraine, the west — are a supporting cast,” said Alex Kovzhun, a Ukrainian political consultant.

The latest attack comes just days after US president Joe Biden said he had approved provision of one Patriot missile battery for Kyiv to be delivered in the coming months. Zelenskyy has long pleaded with his US and European allies to bolster Ukraine’s air defences, which rely mostly on Soviet-era equipment, with more sophisticated systems.

“This year we didn’t just save our air defence, we made it the strongest ever,” Zelensky said in his evening address on Friday. “But in the new year Ukraine’s air defence will become even stronger and more efficient.”

Russia has stepped up its use of missile and drone strikes as its military campaign on the ground has become bogged down in the face of Ukrainian counteroffensives.

In a New Year’s Eve message broadcast from the headquarters of Russia’s southern military district army corps on Saturday, Putin pledged to put an end to the “criminal Nazi regime in Kyiv”.

Much of the speech was a justification for the full-scale invasion Moscow launched on February 24. Putin, flanked by uniformed soldiers, complained about traitors, western lies, neo-Nazis, plots to split Russia apart and the conquest of Russia’s historical territories”.

In a separate New Year message, defence minister Sergei Shoigu, who has been widely criticised for Russia’s battlefield failures, claimed that victory was “inevitable” in 2023.

Ukraine’s defence ministry said in a statement: “With each new missile attack on civilian infrastructure, more and more Ukrainians are convinced of the need to fight until the complete collapse of Putin’s regime.”

News - September 22, 2022 0
Field Day, a Portland startup that aims to encourage volunteer programs within businesses, launched its web portal Wednesday after months of private testing.Founded by...

News - December 21, 2021 0
Solid sales for Nike in the US and Europe helped offset pandemic-related challenges in China and Asia-Pacific during the second quarter and underpinned a...

News - December 22, 2022 0
Dramatic video shows a flight attendant laying into an insolent passenger after he allegedly made her coworker cry over a meal request — furiously...
© 2022 Venture Current is a Flag Media LLC Publication. All Rights Reserved.
VC is part of the FLAG Token rewards network. Clients and partners can use FLAG Tokens for VC products and services.
VC runs 'Automatic' software. Stories posted here come from generic-topic Google news RSS feeds as well as client and partner-approved content.
If a story appears on this page that needs to be deleted due to licensing issues, please message us immediately so we can help you.