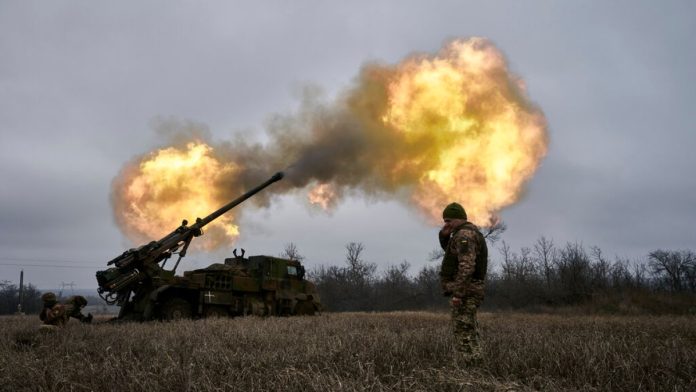 Russian Foreign Minister Sergey Lavrov has given Ukraine an ultimatum: Fulfil Moscow’s demands — including surrendering Ukrainian territory that Russia now controls — or the Russian army will decide the fate of Ukraine.

Speaking a day after Russian President Vladimir Putin once again said he was open to peace talks — and which the United States has described as disingenuous — Lavrov told Kyiv that it should, for its “own good”, comply with Moscow’s wishes.

“Our proposals for the demilitarisation and denazification of the territories controlled by the regime, the elimination of threats to Russia’s security emanating from there, including our new lands, are well known to the enemy,” state news agency TASS quoted Lavrov as saying late on Monday.

“The point is simple: Fulfil them for your own good. Otherwise, the issue will be decided by the Russian army,” Lavrov said.

Asked by TASS how long the conflict will last, Lavrov said: “The ball is in the regime’s court and Washington behind it.”

On Sunday, Russian President Vladimir Putin again said Moscow was open to negotiations and blamed Kyiv and its Western backers for a lack of talks, comments which the US has dismissed as insincere.

As the war enters its 11th month and despite myriad battlefield setbacks for Moscow, Russian forces are engaged in fierce fighting in the east and south of Ukraine while Russia’s missile and drone attacks have devastated Ukraine’s civil infrastructure, leaving millions without power, heating and water.

Ukrainian President Volodymyr Zelenskyy said in his nightly video address on Monday that the situation at the front in the Donbas region was “difficult and painful” and required all of the country’s “strength and concentration”. He said that as a result of Russia’s targeting of Ukraine’s energy infrastructure, nearly nine million people were now without electricity. That figure amounts to about a quarter of Ukraine’s population.

Tens of thousands of Ukrainian civilians have also been killed in cities Russia razed to the ground, and thousands of troops on both sides have died.

Hosting leaders of former Soviet states in St Petersburg on Monday for a summit of the Commonwealth of Independent States group, Putin made no direct reference to the war in Ukraine while saying threats to the security and stability of the Eurasian region were increasing.

“Unfortunately challenges and threats in this area, especially from the outside, are only growing each year,” he said.

Since the invasion in February, Ukraine has driven Russian forces from the north, defeated them on the outskirts of the capital Kyiv and forced Russian retreats in the east and south. But Moscow still controls swathes of eastern and southern land Putin claims to have annexed.

In Baghdad Conference, Egypt’s Sisi calls for putting an end to foreign interventions in...

News - May 4, 2022 0
Russia’s invading armed forces have conducted a second wave of cruise missile strikes on railway infrastructure across Ukraine in as many days, Kyiv claimed...

News - December 22, 2021 0
The Novavax Covid-19 vaccine appears to generate an effective immune response against the Omicron variant, according to preliminary data released by the drugmaker on...

News - December 4, 2021 0
Fortnite Chapter 2 has only just come to an end, but that isn't preventing sleuths from finding out what Chapter 3 will hold. As...

News - February 5, 2022 0
Internet behemoth Amazon AMZN set a new record on Friday when its stock reached the largest increase in market capitalization in history during one...
© 2022 Venture Current is a Flag Media LLC Publication. All Rights Reserved.
VC is part of the FLAG Token rewards network. Clients and partners can use FLAG Tokens for VC products and services.
VC runs 'Automatic' software. Stories posted here come from generic-topic Google news RSS feeds as well as client and partner-approved content.
If a story appears on this page that needs to be deleted due to licensing issues, please message us immediately so we can help you.