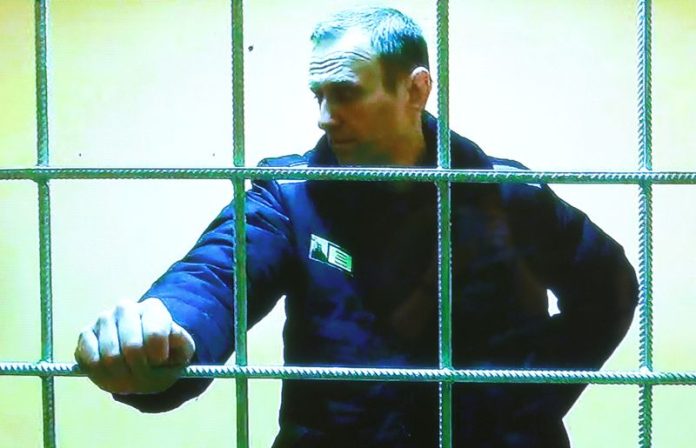 (Reuters) – Jailed Russian opposition politician Alexei Navalny said on Monday he was suffering worsening back pain from long spells in solitary confinement that he said were part of a deliberate strategy by the authorities to undermine his health.

“See how the system works when you are not allowed to beat up a person, but your leadership ordered you to hurt them badly,” the Twitter post said.

“For example, I have a problem with my spine. It is clear what one has to do to make the problem worse: keep me immobile as much as possible,” said Navalny, 46, who is able to post on social media via his lawyers and allies.

“If you lock a person up in a punishment cell, where he can either stand or sit on an iron stool for 16 hours a day, after a month in such conditions even a healthy person will undoubtedly get back pains. I’ve spent the last 3 months like this. Naturally, my back hurts a lot.”

Navalny said he had asked for a month and a half to see a doctor. When a doctor finally came, he said, she examined him for just five minutes and refused to tell him her diagnosis or what she was prescribing.

He said he had then been given injections. When he asked what they contained, he was told: “We inject what the doctor prescribed. Vitamin B, for example.”

The injections are not helping, he said, “and in general, I feel a little uncomfortable being injected with an unknown drug”.

Reuters requested comment from the federal prisons service responsible for the penal colony east of Moscow where Navalny is being held. There was no immediate reply.

The Twitter post included images from Navalny’s medical records, which he said had been released to him a month after he asked to see them.

The hand-written sheets were hard to decipher in the form in which they appeared online. They included a reference to “degenerative-dystrophic disease of the spine” and said he had often complained about pain in his back and right hip, and of numbness in both feet. One note said Navalny had declined a recommendation to speak with a psychiatrist.

Navalny is President Vladimir Putin’s most outspoken domestic critic and a trenchant opponent of the war in Ukraine.

He required months of medical treatment in Germany after being poisoned with a nerve agent during a trip to Siberia in 2020. The Kremlin denied trying to kill him.

He is now serving sentences totaling 11-1/2 years on charges including fraud and contempt of court. Navalny, his allies and Western governments and rights groups say he was the victim of trumped-up charges designed to silence him.

‘Not unusual’: No wind causes energy price hike in Europe

US to release 50m barrels of oil from reserves

News - November 23, 2021 0
President Joe Biden has announced the release of oil from the US’s strategic stockpile in an attempt to drive down petrol prices and snuff...

News - June 23, 2022 0
The ability to edit and unsend messages was one of the flagship features of iOS 16 announced earlier this month, but the...

News - April 3, 2022 0
WAYNESBORO, Va. (WHSV) - The Augusta County Sheriff’s Office is seeking the public’s assistance locating Lynette Cecelia Brydge.The sheriff’s office said Brydge was reported...
© 2022 Venture Current is a Flag Media LLC Publication. All Rights Reserved.
VC is part of the FLAG Token rewards network. Clients and partners can use FLAG Tokens for VC products and services.
VC runs 'Automatic' software. Stories posted here come from generic-topic Google news RSS feeds as well as client and partner-approved content.
If a story appears on this page that needs to be deleted due to licensing issues, please message us immediately so we can help you.