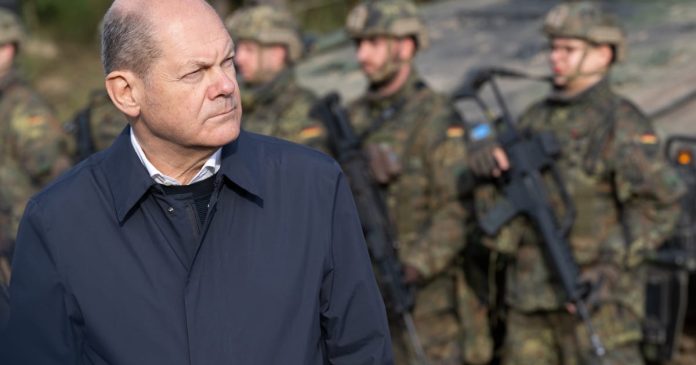 Press play to listen to this article

BERLIN/DAVOS — International efforts to ship Ukraine modern tanks may hinge on Germany — but it’s waiting for the U.S. to move first, which isn’t happening.

Ahead of a meeting of Western defense ministers this Friday at the U.S. Ramstein air base in Germany, Chancellor Olaf Scholz is being goaded to help Ukraine get Germany’s best-in-class Leopard 2 tanks in anticipation of a possible spring offensive. The reason: In addition to overseeing his own fleet of Leopard tanks — and Europe’s largest economy — Scholz must approve other countries’ donations of the German-made tanks.

There’s an expectation Germany may soon at least allow allies like Poland and Finland to send their Leopards to Kyiv. And officials and diplomats in Berlin say the chancellor may even offer to help Ukraine with training and maintenance for the Leopards.

But that’s the farthest Germany is likely to go for now. Unless, of course, the U.S. is also willing to send tanks. Scholz indicated as much Wednesday, keeping a low profile on the subject when pressed at the World Economic Forum in Davos, Switzerland.

“We are [among] the ones that are doing the most” on military aid for Ukraine, the chancellor said, cataloging nearly four minutes’ worth of military hardware Berlin has already supplied or will send soon, from air defense systems to Marder infantry fighting vehicles.

“We are never doing something just by ourselves, but together with others, especially the United States, which are very important in this common task to defend Ukrainian independence and sovereignty,” he added.

It’s a line German officials have repeated in recent days: Berlin’s decision on Leopard tanks is linked to the Americans’ willingness to send their own M1 Abrams tanks. Yet while President Joe Biden’s administration is gearing up to announce a major new U.S. weapons package for Ukraine on Friday, the aid is not expected to include American tanks.

That’s causing a headache for European leaders like Polish Prime Minister Mateusz Morawiecki, who wants to form a broad alliance of countries that would each supply a few Leopards to Ukraine, adding up to a large battlegroup of tanks.

So far, only Finland has publicly raised the possibility of participating in such a program. Many other countries appear to be holding back as long as powerful Germany remains on the fence.

Spain, for instance, which owns over 200 Leopard 2 tanks, has already stated that the question of sending some of those tanks to Ukraine “is not on the table as we are speaking today,” as Foreign Minister José Manuel Albares said Tuesday in Davos.

Yet EU diplomats say countries like Spain could hardly keep up such a line if Berlin — and Washington — changed course.

In search of a leader

Pressure on Scholz intensified after Britain announced last weekend that it would send its own Challenger 2 battle tanks to Ukraine. U.K. Defense Secretary Ben Wallace is convening a meeting with Eastern European and Baltic defense ministers in Estonia on Thursday to further raise the pressure on Berlin.

The French are also considering sending their own Leclerc tanks to Ukraine in a bid to provide Berlin with a joint framework for tank shipments.

“The subject is complicated and hasn’t been settled yet in Paris. But we are thinking about it,” a French official told POLITICO, before nodding to an upcoming meeting on Sunday. “We’ll see what gets decided at the joint French-German Cabinet meeting.”

“For months now, Scholz has warned against going it alone with regards to arms deliveries to Ukraine,” said Katja Leikert, a German lawmaker on the foreign affairs committee from the center-right Christian Democratic Union, the country’s main opposition party. “But now he is doing exactly that: His hesitancy to let European allies deliver Leopard 2 tanks to Kyiv is a dangerous solo action.”

She told POLITICO: “Germany should take a leading role in a European coalition of states delivering Leopard 2 battle tanks to Ukraine.”

Strong criticism is also coming from the Green party, a junior coalition partner in the government led by Scholz’s Social Democrats. In a thinly veiled push for sending tanks to Ukraine, Foreign Minister Annalena Baerbock from the Greens said earlier this week that she hopes Friday’s Ramstein meeting will “set in motion decisions that will help Ukraine liberate more people.”

NATO Secretary General Jens Stoltenberg said in Davos that the “main message” of the Ramstein meeting will be to deliver “more advanced support, heavier weapons and more modern weapons.”

Pressure for Germany to do more also came from Strasbourg on Wednesday. The European Parliament passed a nonbinding resolution urging Scholz to form an international coalition for sending Leopards “without further delay.” And European Council President Charles Michel told MEPs: “The time is now. Ukraine needs more military equipment. I firmly support the delivery of tanks.”

A potential gesture by Scholz to help with training for Leopards or building up the supply chain for maintenance, as raised by officials and diplomats in Berlin on Wednesday, could be of some relevance, given that the tanks are made in Germany.

“In general, the availability of spare parts and assured logistical supply is crucial to the effectiveness of the main battle tank system, including, for example, recovery tanks to recover damaged tanks,” said Georg Löfflmann, an assistant professor in war studies at Warwick University.

General Rajmund Andrzejczak, chief of the general staff of Poland’s armed forces, told POLITICO on Wednesday that Ukrainians could be trained quickly to use Western tanks, urging Kyiv’s partners to avoid unnecessary delays.

“This is a decisive point of battle right now,” he said, pointing to Russian efforts in Soledar and Bakhmut. “So now or never. If we’re not sending, if we’re talking too much, bureaucracy, some delay — it could be too late.”

All Raise, a nonprofit to increase diversity in tech, has a new CEO –...

News - March 15, 2022 0
All Raise, a nonprofit that focuses on increasing diversity within venture capital deals and decision makers, has named Mandela Schumacher-Hodge Dixon as the new...

News - September 30, 2022 0
WASHINGTON—The Biden administration has received a rare request from Cuba’s government to provide emergency assistance following the devastating impact of Hurricane Ian, according to...

News - January 9, 2023 0
Since mid-December, bitcoin had failed to finish a trading day (universal coordinated time or UTC basis) over $17,000, and now analysts wonder if the...
© 2022 Venture Current is a Flag Media LLC Publication. All Rights Reserved.
VC is part of the FLAG Token rewards network. Clients and partners can use FLAG Tokens for VC products and services.
VC runs 'Automatic' software. Stories posted here come from generic-topic Google news RSS feeds as well as client and partner-approved content.
If a story appears on this page that needs to be deleted due to licensing issues, please message us immediately so we can help you.