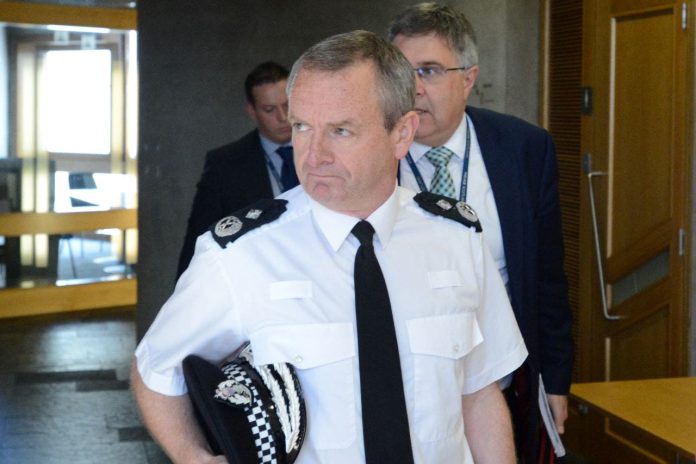 Police in Scotland have sparked outrage for describing pedophiles as “minor-attracted people” in a report.

Officials said the language in the year-end report was based on terminology used by the European Union.

In a year-end report, Chief Constable Iain Livingstone said police have worked on a project that’s main agenda is “to develop understanding and approach to avoid the victimisation of children by engaging Minor-Attracted People (MAPs) and providing them with the necessary support, treatment and guidance to help prevent criminal activities.”

The phrasing in the report drew criticism from many in Scotland who said the police were normalizing sex crimes against children, Scotland Daily Express reported.

Iain Livingstone, Deputy Chief Constable Designate of Police Scotland, arrives to give evidence to the Scottish Parliament’s Justice Sub-Committee on Policing, on the force’s procedures for internal grievances and complaints
(Photo by Ken Jack – Corbis/Corbis via Getty Images)

“I very much welcome the common sense approach from Police Scotland, though even in commissioning documents these euphemisms should be avoided as they mask the reality and hide the horror. The term in whatever context is baloney.”

A conservative party leader in Scotland added that “most Scots will find any attempt to soften the language around paedophilia in official guidance to be deeply disturbing and wrong.”

Police working as security during a cinch Championship match between Ayr United and Kilmarnock at Somerset Park, on March 11, 2022, in Ayr, Scotland.
(Photo by Craig Foy/SNS Group via Getty Images)

“How about we don’t do this: ‘minor-attracted people’ equal predators plain and simple,” Peterson tweeted.

In a statement, Scotland police said the term is not used in the department but was based on European Union language.

Vehicles pass along Princes Street as the clock tower of Balmoral hotel is seen on the city skyline in Edinburgh, U.K.
(Photographer: Simon Dawson/Bloomberg via Getty Images)

“Police Scotland does not use the term Minor-Attracted Person,” the statement said. “The reference in the Chief Constable’s Assessment of Policing Performance 2021/22 was in the context of Police Scotland’s engagement with the Horizon Project EU consortium to tackle Child Sexual Abuse and Exploitation.”

“The term was used in the commissioning documents for the consortium and is more commonly used on the continent. In September, Police Scotland representatives successfully lobbied for the MAP term not to be used by the consortium.”

Scotland police did not immediately respond to a request for comment from Fox News Digital.

Andrew Mark Miller is a writer at Fox News. Find him on Twitter @andymarkmiller and email tips to AndrewMark.Miller@Fox.com.

News - March 25, 2022 0
The letters MOEX are pictured at the Moscow Exchange, with the Kremlin and the Four Seasons Hotel seen in the background, in Moscow, Russia,...

News - July 9, 2022 0
TVs are always massively popular among the best Prime Day deals, and we don't expect 2022 to be any different. There will probably be...

News - October 28, 2022 0
North Korea fired a ballistic missile toward the sea on Friday, Seoul officials said, as its rival South Korea was wrapping up an annual...

News - December 13, 2021 0
A bipartisan US government lobbying group has picked London’s junior stock market for a listing given the advantages in raising smaller amounts on Aim...

News - November 21, 2022 0
Oil prices fell to their lowest levels in 10 months on Monday after a report that the Opec producer group was weighing an increase...
© 2022 Venture Current is a Flag Media LLC Publication. All Rights Reserved.
VC is part of the FLAG Token rewards network. Clients and partners can use FLAG Tokens for VC products and services.
VC runs 'Automatic' software. Stories posted here come from generic-topic Google news RSS feeds as well as client and partner-approved content.
If a story appears on this page that needs to be deleted due to licensing issues, please message us immediately so we can help you.