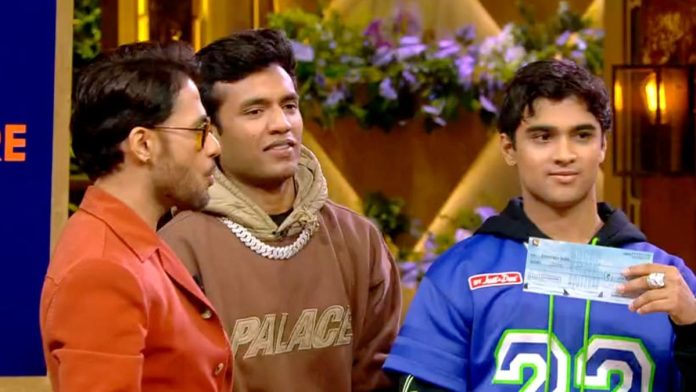 You’ve already heard of the new season of Shark Tank India getting inspired by various reality TV shows like Bigg Boss, Indian Idol, while also having brought the tastes of MasterChef onboard with hint of Roadies masala in the mix. The latest episode has bagged a new addition to this list as fans have noticed dance and performative elements of Boogie Woogie as well. Just like the ‘House of Chikankari‘ pitch, the ninth episode brought on Gen-Z founders of ‘Zillionaire’ along with their supportive hip-hop team to reflect the culture of their brand.

During last few episodes, we have witnessed some drama brewing between the sharks, which quickly unfolded into big fights. The audience took notice of how Anupam Mittal was found to be at the centre of them all. However, this episode turned things around for him when he finally signed his solo deal with ‘Zillionaire’ and was crowned the “King of Bling”.

Next to join in were ‘CredMate’ and ‘Freebowler’. While the former didn’t get any investments this time, the latter’s sinking hope was revived by Namita Thapar at the last moment as she went on to join their innovative approach seeking to improve the Indian cricket training experience. Their manual and battery-operated bowling machines garnered quite a lot of attention among the viewers as well who instantly applauded the team for their efforts.

The latest addition to the season was rather quiet and contained as compared to the former entries, but yet again, fans couldn’t help but notice Peyush Bansal’s collection of spectacle frames, as one of the Twitter users even tagged Lenskart to dish out the list of frames he’s been sporting on the show.

Can I Draw Social Security At 62 and Still Work Full Time?

News - August 6, 2022 0
All financial plans are important, but Social Security benefits play a profound role in preventing elderly poverty and are paid out at an important...

Third wave of immigrants arrive in Chicago from Texas

PRECIOUS-Gold flat on caution ahead of U.S. payroll data for Fed’s taper cues

Opinion | John R. Bolton: Shinzo Abe’s death is a loss to the U.S.

News - July 8, 2022 0
Comment on this storyCommentJohn R. Bolton served as national security adviser under President Donald Trump and is the author of “The Room Where It...

News - January 29, 2023 0
PoliticsNational SecurityDeal with U.S. comes as President Biden seeks to slow China’s military development Source
© 2022 Venture Current is a Flag Media LLC Publication. All Rights Reserved.
VC is part of the FLAG Token rewards network. Clients and partners can use FLAG Tokens for VC products and services.
VC runs 'Automatic' software. Stories posted here come from generic-topic Google news RSS feeds as well as client and partner-approved content.
If a story appears on this page that needs to be deleted due to licensing issues, please message us immediately so we can help you.