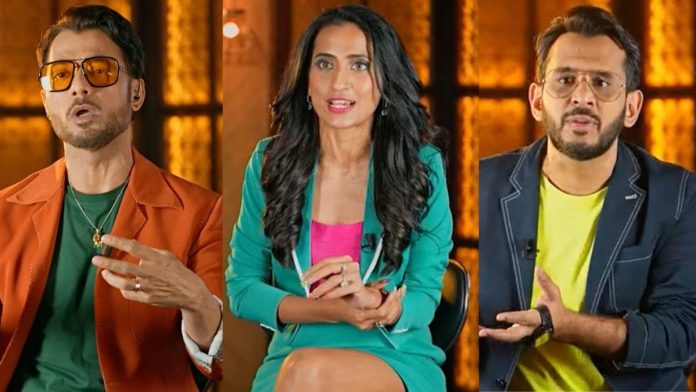 ‘Paradyes’, an India semi-permanent hair colour brand, ‘Nestroots’, an affordable luxury home decor business and ‘Coezy Sleep’, presenting an apparel based sleep quality enhancer come out for the ninth episode of the season with their respective pitches. The order of pitches is the same and the first one itself drives a long-running explosive response from the sharks. With each one of them ready with a deal of their own, boisterous commotion was bound to follow.

Peyush and Anupam, however, don’t reach the end of the deal as they’d favoured and Aman and Vineeta’s collaboration swoops in for the win. However, the journey to get there was marred with heavy drama and endless counter offers that left some sharks in a bitter mood by the end of it. Fans who caught up with the latest episode fired up with their Twitter reactions after the broadcast. Many users on the platform have outrightly declared their decision of not wanting to come back more episodes of the show due to the intensely increasing theatricality synonymous with what is often witnessed on Bigg Boss.

The second pitch went by peacefully, but the third one again had the viewers speaking up about the remarkable similarities shared with another pitch as seen on Shark Tank US. Fans are calling the ‘Coezy Sleep’ pitch a “rip-off of a highly successful product in the US”, initially presented by ‘HugSleep’ on the American rendition of the business reality show.

While some audiences are still favouring Peyush as “the most sensible shark”, others are walking up to Anupam’s corner. A similar situation was provoked during the previous episode as well, and the viewers aren’t taking these “dirty fights” lightly. Conversely, a few people are also back to wondering how Ashneer Grover would’ve reacted to the first pitch. Netizens have also made another claim about how “Anupam mittal is the new Ashneer Grover” in the second instalment of the reality series.

How to protect your iPhone or Android from virus- What you must never do...

Meta tells advertisers mixed reality could be a few years away

News - January 20, 2023 0
Christopher Waller, U.S. President Donald Trump's nominee for governor of the Federal Reserve, listens during a Senate Banking Committee confirmation hearing in Washington, D.C.,...
© 2022 Venture Current is a Flag Media LLC Publication. All Rights Reserved.
VC is part of the FLAG Token rewards network. Clients and partners can use FLAG Tokens for VC products and services.
VC runs 'Automatic' software. Stories posted here come from generic-topic Google news RSS feeds as well as client and partner-approved content.
If a story appears on this page that needs to be deleted due to licensing issues, please message us immediately so we can help you.