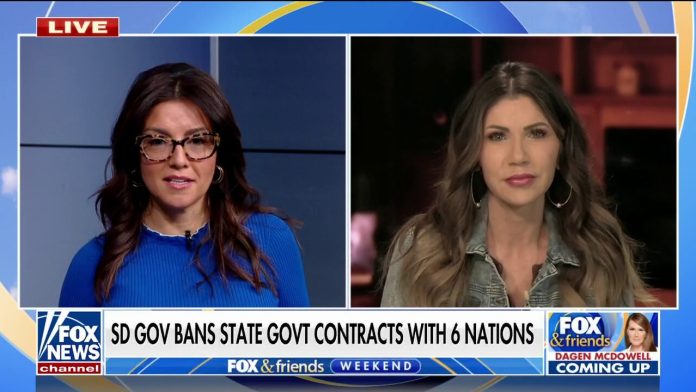 “These are evil governments who hate the United States of America, and I want to make sure that South Dakotans are protected from doing any kind of business with them in telecommunications or state contracts,” she said Sunday on “Fox & Friends Weekend.”

Noem told host Rachel Campos-Duffy that the state is also bringing forth legislation to prevent China’s purchase of more agricultural land from The Mount Rushmore State.

She also warned that the Chinese Communist Party is purchasing U.S. agricultural land to gain control of America’s food supply, another step in their effort to undermine the nation.

“We saw the Communist Party try to buy up assets in other states, and that’s not going to happen here in South Dakota,” she said.

“We’ve talked about the national security threats, the military that they’re building up, their stealing of our IP manipulating currency… But they’ve also been buying up our food processing systems – our manufacturing plants, our chemical and fertilizing companies. Now they’re buying up our land…”

HOUSE REPUBLICAN DISMISSES CHINA TROLLING ON HIS SUPPORT FOR TIKTOK BAN: ‘I WILL NOT BE SILENCED’

Chinese President Xi Jinping, one of the nation’s leaders under scrutiny for attempting to undermine the U.S. with the Chinese Communist Party.
(Saudi Press Agency/Handout via REUTERS)

Noem issued a dire warning about “caving in” to China’s wants, urging others against becoming “normalized” to doing business with the country and granting them access to key personal information – a sentiment shown in her state’s ban of the controversial video sharing platform TikTok.

“I banned TikTok several months ago from all state devices and made it a crime if people did download it and access it because it was a real threat to our people. We know that they’re collecting data on United States citizens, so we should never forget that China wants to destroy the United States of America…”

Noem’s warning coincides with concerns from other state governments, institutions of higher education and even a number of bipartisan federal lawmakers who claim the app is stealing users’ data for malevolent use.

Noem’s executive order criminalizes the downloading or use of TikTok on state-issued devices, while other states, including Maine, New Jersey, Ohio, Georgia, Alabama and others have echoed the action.

“We need to do all we can to protect ourselves and keep ourselves strong,” she said.

Taylor Penley is a production assistant with Fox News.

News - December 1, 2022 0
Elsa Majimbo keeps making solid moves in the US after she was featured among the groundbreaking...

News - September 22, 2021 0
South Korea is expected in the coming weeks to receive 1m doses of the BioNTech/Pfizer Covid-19 vaccine from the UK as part of a...

News - October 16, 2022 0
US president Joe Biden has said Liz Truss’s original tax proposal was a “mistake”, in his most critical comments about the UK prime minister’s...

The unicorn funding slump is worse than you thought • TechCrunch

News - October 3, 2022 0
Welcome to Q4, friends. If you were hoping to begin the final chunk of 2022 with good news, tough. We’re starting the quarter off...
© 2022 Venture Current is a Flag Media LLC Publication. All Rights Reserved.
VC is part of the FLAG Token rewards network. Clients and partners can use FLAG Tokens for VC products and services.
VC runs 'Automatic' software. Stories posted here come from generic-topic Google news RSS feeds as well as client and partner-approved content.
If a story appears on this page that needs to be deleted due to licensing issues, please message us immediately so we can help you.