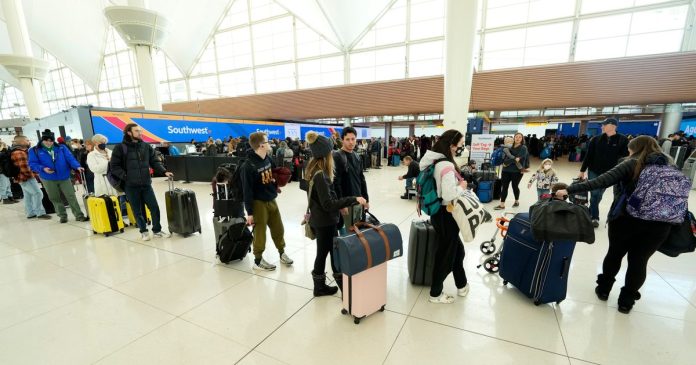 The U.S. Department of Transportation said it will look into flight cancellations by Southwest Airlines that have left travelers stranded at airports across the country amid an intense winter storm that has killed dozens of people.

Many airlines were forced to cancel flights due to the weather, but Southwest was by far the leader in canceled flights. About 4,000 domestic U.S. flights were cancelled Monday, according to the tracking website FlightAware, and 2,900 of those were Southwest’s.

Problems at Southwest continued Tuesday, and the airline warns it will be operating at a reduced scheduled for days.

Other major airlines, including American, United, Delta and JetBlue, suffered cancellations rates of between none and 2% Tuesday. The cancellation rate at Southwest Airlines was 62%, according to FlightAware, after the airline cancelled more that 70% of its flights Monday.

Southwest spokesman Jay McVay said at a press conference in Houston that cancellations snowballed as storm systems moved across the country, leaving flight crews and planes out of place

“So we’ve been chasing our tails, trying to catch up and get back to normal safely, which is our number one priority as quickly as we could,” he said. “And that’s exactly how we ended up where we are today.”

More than 2,800 more flights had already been canceled in the U.S. as of 7 a.m. Tuesday and problems are likely to carry over at least into Wednesday.

Passengers stood in long lines trying to rebook their flights. The Department of Transportation said on Twitter that it was “concerned by Southwest’s unacceptable rate of cancellations and delays & reports of lack of prompt customer service.” The tweet said the department would look into whether Southwest could have done anything about the cancellations and whether the airline was complying with its customer service plan.

Southwest CEO Bob Jordan told The Wall Street Journal in an interview that the airline would operate just over a third of its usual schedule to allow crews to get back to where they needed to be.

“We had a tough day today. In all likelihood we’ll have another tough day tomorrow as we work our way out of this,” he said Monday evening. “This is the largest scale event that I’ve ever seen.”

The Gold Standard EP. 7: Heart of a Tiger

News - November 6, 2021 0
Kabosu, the Shiba Inu dog in Japan that inspired the...
© 2022 Venture Current is a Flag Media LLC Publication. All Rights Reserved.
VC is part of the FLAG Token rewards network. Clients and partners can use FLAG Tokens for VC products and services.
VC runs 'Automatic' software. Stories posted here come from generic-topic Google news RSS feeds as well as client and partner-approved content.
If a story appears on this page that needs to be deleted due to licensing issues, please message us immediately so we can help you.