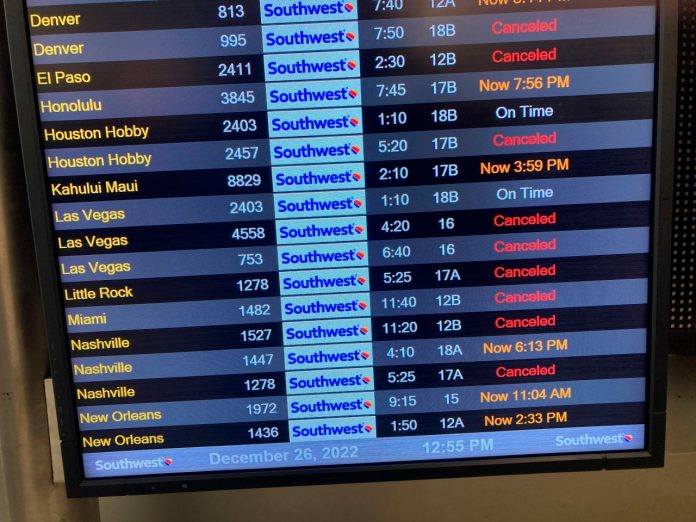 What began as a crisis for Southwest Airlines amid a crippling winter storm turned to paralysis Monday evening when the budget carrier apparently canceled all departing flights from Los Angeles area airports until Dec. 31.

Thousands of flights have been canceled nationwide.

The airline’s website lists all departures out of LAX, Hollywood Burbank Airport, Ontario International Airport and the John Wayne Airport as “unavailable” until New Year’s Eve.

Travelers at LAX told KTLA that they were told the same thing.

Similar issues were reported at the San Diego International Airport.

It was unclear if arriving Southern California flights were also affected.

Tirso Rayo was at LAX Monday evening, trying to make a flight back home to Boise, Idaho. Their flight was canceled, and rescheduling seemed unlikely.

“They don’t care,” Rayo said. “It’s poor business, never again will I ever fly with these guys.”

Others opted to take the long way home by renting vehicles and carpooling, but available rentals are getting snatched up quick and prices for any remaining vehicles are surging.


Southwest Airlines cancels over 2,600 flights: What is going on?

The issues plaguing Southwest comes after one of the busiest travel weekends of the year and right in the middle of the winter break travel rush.

Long lines both in person and on the phones have left travelers frustrated, exhausted and helpless without much information.

A purported internal memo leaked by an employee Monday blamed some of the operational crisis on employees calling out sick.

Southwest has not commented on the veracity of the document.


Flight canceled? Experts share some advice about what to do

Southwest has apologized for cancellations which it has called “unacceptable.” The company posted its most recent update on Twitter around 8 a.m. Monday.

On Monday afternoon, the United States Department of Transportation said it would be investigating the rate of cancellations and delays to determine if they were preventable and whether or not Southwest is “complying with its customer service plan.”

Transportation Secretary Pete Buttigieg also said he was monitoring the situation closely and said we would have more information on Tuesday.

How Following This Dave Ramsey Advice Could Hurt You Financially

News - July 30, 2022 0
The chief executive of KPMG’s business in the United Arab Emirates has held face-to-face meetings with key clients in an attempt to shore up...

News - July 3, 2022 0
Boris Johnson has come under increasing pressure to explain why he appointed to the government an MP who had been linked with repeated allegations...

News - October 6, 2022 0
There weren’t too many surprises at today’s Made by Google event in Brooklyn, NY. We knew the Pixel 7/7 Pro would make its official...
© 2022 Venture Current is a Flag Media LLC Publication. All Rights Reserved.
VC is part of the FLAG Token rewards network. Clients and partners can use FLAG Tokens for VC products and services.
VC runs 'Automatic' software. Stories posted here come from generic-topic Google news RSS feeds as well as client and partner-approved content.
If a story appears on this page that needs to be deleted due to licensing issues, please message us immediately so we can help you.