We have tracked a rise in global interest rate expectations for the past few months with serious implications to risk assets that have established a foundation of the decade-plus bull trend in the support from these key players. Yet, through the sudden swell in forecasted costs (for leverage as much as goods and services), we have seen a fairly resilient backdrop for risk assets. That confidence seemed to be slipping through the end of this past week however as the warnings that Russia was preparing to invade Ukraine grew sharply. While rate forecasts will be a persistent point of speculation moving forward, it is at least consistent enough a theme that we can plot reasonable probabilities. In the case of the geopolitical risks associated to the feared invasion and possible response from the United States and NATO, the risks are very difficult to gauge and potentially extreme. That concern registered to a minor extent as seen in the S&P 500’s lead on a break lower from a two-week congestion. The SPDR ETF cleared the period’s range floor which also happens to be a 38.2 percent Fibonacci retracement and 200-day moving average. There is a lot more altitude to lose if conditions materially worsen.

While I believe that by the end of the next week or one month forward that we are more likely to find interest rate expectations are still the top fundamental theme, the risk in the immediate unknown demands traders’ attention. The political, economic and financial implications of an invasion of Ukraine are not at all clear; and that means a meaningful discount of the event’s practical probability of occurring is not really feasible. Where do you look to track the risk? Headlines are the best point for news as it is the type of world event that would spread through national news efficiently. If you are looking to see how the market is interpreting developments – bad or good – the volatility measures are obvious gauges to consult. The VIX volatility index shot higher to end this past week, but one of the retail market’s favorite (and flawed) interpretations of this ‘fear’ measure is the short-term VXX volatility ETF. 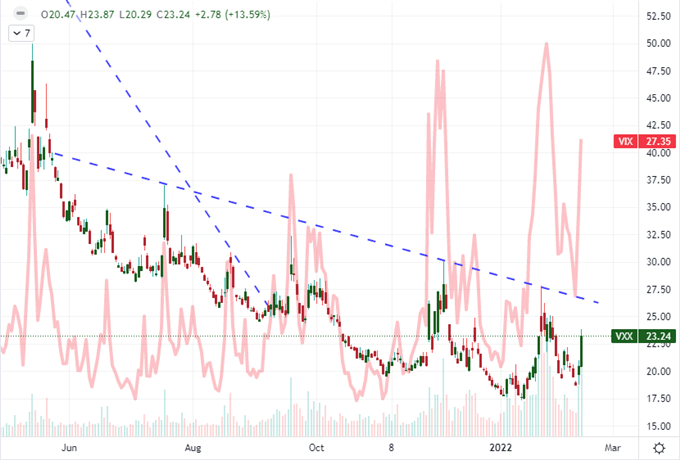 A speculative swoon in the financial system is a complicating factor when it comes to tracking progressive fundamental issues like monetary policy. Of course, we are currently weighing the risks around Ukraine; but any effective catalyst of fear can materially upend the course of rate forecasting. Through the end of this past week, the US 10-year yield which was reflecting the pressure of inflation and Fed forecasting, tumbled 12 basis points (or 5.9 percent) as the safe haven appeal of US sovereign debt boosted prices and in turn weighed its yield. That said, a more unstable outlook for the markets and economy naturally weighs rate expectations on its own. One of the critical considerations for the rate forecasting ahead, particularly with the Fed, is what level of tolerance there is for capital market swoon. Rhetoric from the group recently has suggested they would not be put off course by a measured rebalancing, but I have little doubt that any sign of panic would trigger their flight response. That said, I will be looking more closely at Fed Funds futures rather than shorter (2-year) Treasury yields for my rate speculation.

Chart of US 2-Year Treasury Yields 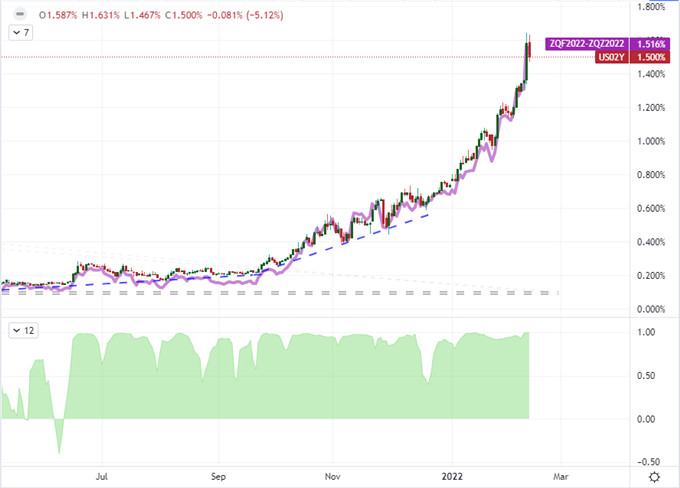 Speaking of rate forecasts, conditions are not so hairy that the markets have backed off of their most hawkish forecasts for the Federal Reserve. After the January CPI update this past week followed by the uber hawkish language from St Louis Fed President James Bullard, we have seen all manner of speculation as to what extraordinary steps the FOMC may take to cool the highest inflation in four decades. You can see the initial results from a poll I ran in Twitter to see what market watchers thought was the most probable course for the central bank to touch off the hawkish turn in its policy regime. The majority still believe that the first move by the bank will be a 25 basis point at its official March 16th meeting. I tend to agree with that. That said, the speculation that the group could open with a 50 basis point move in a month has serious support – and Fed Fund futures are pricing in a 94 percent probability of that outcome (though that forecast has oscillated wildly over the past few days). A different approach that gained traction in the last 48 hours of this past week was the notion that the Fed could hike before its official meeting, which would certainly send a message. There are alternative paths as well including an earlier end to the QE purchases and perhaps even a hastened QT (quantitative tightening), but that starts to get into more nuanced tools in market terms. 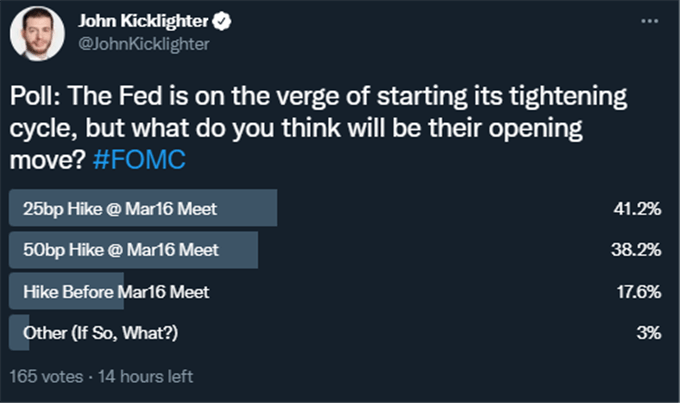 Where to Look Outside of Rates and the S&P 500

As far as gauging what the mood of the market is, the US indices remain one of my preferred vehicles. If they do eventually break through their floors, there is also considerable potential to contemplate in its own right. That said, I’m not just isolating my attention to the SPY and QQQ. A market that I have recently relegated to something of a ‘lost in its fundamental allegiances’ category, gold has finally broken a multi-year triangle to the upside on a risk aversion bid. Bitcoin will be something of a related interpretation as it is often referred to as digital gold, an alternative to traditional fiat and an alternative to the Dollar – though it really doesn’t lead with any of those roles. It registers more as a risk asset in portfolios for me. Another overt connection to the fundamental waves would be the Dollar. EURUSD finally break from its 1.1500 to 1.1400 range (to the downside), but it wasn’t under the fundamental power that I had expected. The Greenback can play a safe haven role, but even the USD has a more immediate haven counterpart in the Japanese Yen. USDJPY is a close watch for me this week with 114 representing a serious fundamental line in the sand for me. 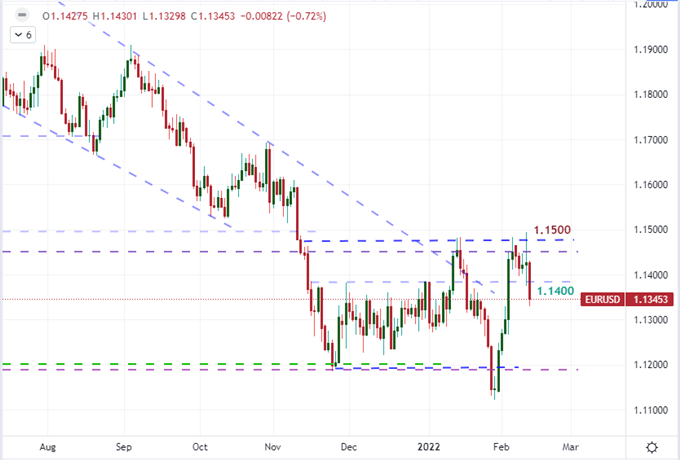 And, while Ukraine and Fed rate forecasting will be on the top of my watch list through the immediate future, it won’t be the only matters for which I’m considering event-driven potential. While inflation data and Fed speak create a fairly comprehensive view, there are also inflation readings on tap for the UK, Japan and Canada ahead. Turkey is due to weigh monetary policy once again after their very unorthodox 2021 efforts and other central bank speakers (like ECB President Lagarde) will try to walk the minefield without unnecessarily detonating volatility. Have a healthy respect for the different scheduled events ahead, but always prioritize potential influence. 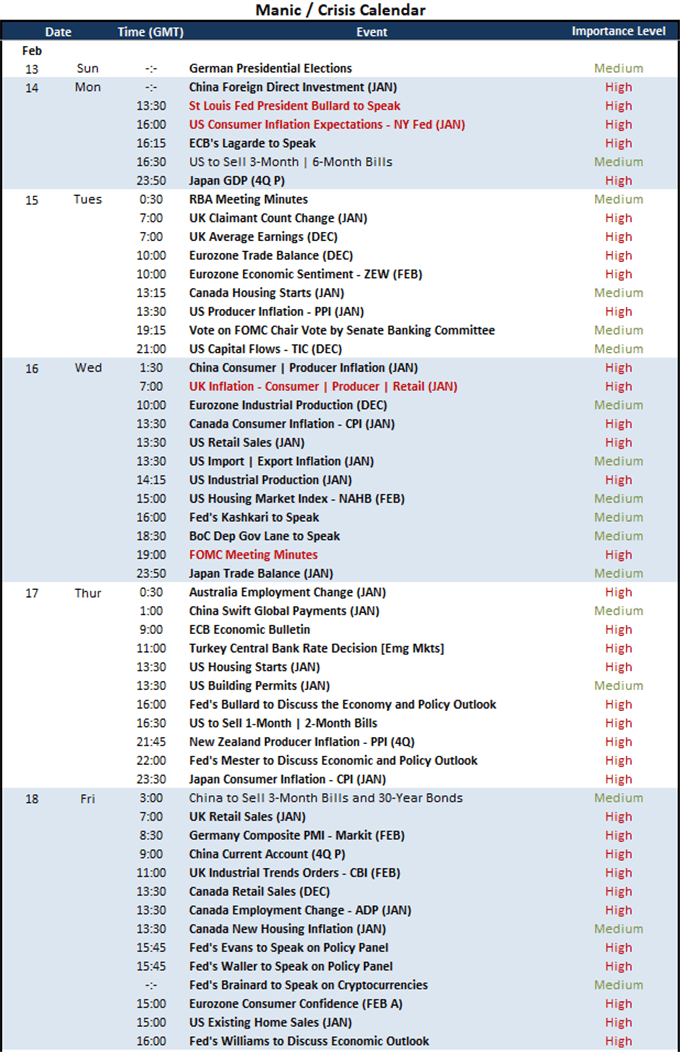 Table Made by John Kicklighter

News - January 23, 2022 0
The Australian Open tennis tournament has been overshadowed by protests for a second time this year after Tennis Australia ejected two spectators for wearing...

News - July 24, 2022 0
NORTH CANTON — Callie Brownson alternated between running and backpedaling, spotting the ball and shouting instructions along the way.While Brownson's assistants worked from the sideline...

News - April 11, 2022 0
State-owned Russian Railways was declared in default of a bond obligation on Monday, setting the...

How founder diligence in venture capital is falling short

News - January 24, 2022 0
Assessing founders and teams is an important part of the VC investment...
© 2022 Venture Current is a Flag Media LLC Publication. All Rights Reserved.
VC is part of the FLAG Token rewards network. Clients and partners can use FLAG Tokens for VC products and services.
VC runs 'Automatic' software. Stories posted here come from generic-topic Google news RSS feeds as well as client and partner-approved content.
If a story appears on this page that needs to be deleted due to licensing issues, please message us immediately so we can help you.