I believe now, the market is going to see plenty of reasons to go lower, so therefore the fact that we are closing at the bottom of the range for the day is not a huge surprise either.

The S&P 500 E-mini contract has gotten hammered during the trading session on Wednesday, as we had initially tried to break above the 3900 level, only to get squashed. The 3900 level has been important for quite some time, and you can see that it has in fact offered a bit of a ceiling at this point.

Add to that the fact that we have the Federal Reserve announcement during the day, and it was set up perfectly for a selling opportunity. Initially, traders tried to get as bullish as possible after the Federal Reserve had a slight change in its statement from the last meeting. However, the press conference got everybody rethinking the entire situation, and it was clear that Jerome Powell was willing to keep interest rates higher than a lot of people thought, thereby making money tight for the Wall Street traders. This is something they don’t like, and you can see that they have in fact voted with their feet. At this point, the S&P 500 looks like it’s ready to crumble, perhaps going down to the 3600 level.

Rallies at this point will continue to be selling opportunities, as the market has been crushed. If we can break down below the 3600 level, then it’s likely that we could go down to the 3500 level. The 3500 level being broken to the downside could open the floodgates.

For some reason, if we were to break above the 3900 level, then it’s possible that we could go to the 4000 level or even the 200-Day EMA, but that seems like a pipe dream at this point. 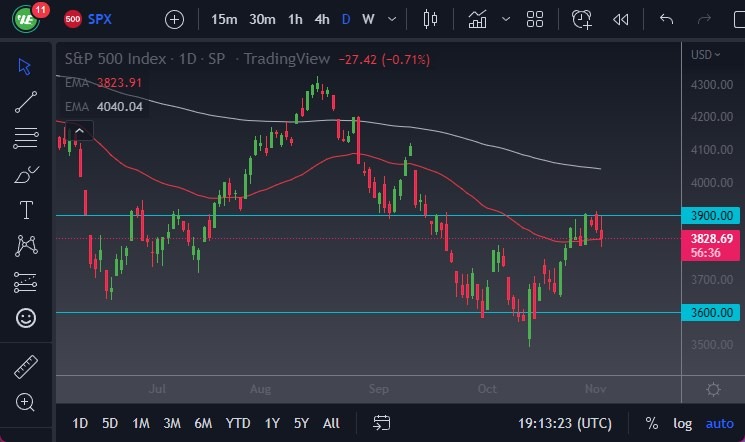 Ready to trade the S&P 500 trading forecast? We’ve made a list of the best online CFD trading brokers worth trading with.

The Trilogy’ screenshots for Nintendo Switch released by Rockstar

News - November 7, 2021 0
GTA: The Trilogy – The Definitive Edition is coming to Nintendo Switch, and Rockstar has shared screenshots. Several screenshots show how the remastered Grand Theft...

News - September 19, 2022 0
Uber said it believed the hacking group Lapsus$ was behind an attack last week that forced the company to temporarily shut down some internal...

News - February 19, 2022 0
People wearing face masks queue at a makeshift testing centre for the coronavirus disease (COVID-19) following the outbreak, in Hong Kong, China February 17,...
© 2022 Venture Current is a Flag Media LLC Publication. All Rights Reserved.
VC is part of the FLAG Token rewards network. Clients and partners can use FLAG Tokens for VC products and services.
VC runs 'Automatic' software. Stories posted here come from generic-topic Google news RSS feeds as well as client and partner-approved content.
If a story appears on this page that needs to be deleted due to licensing issues, please message us immediately so we can help you.