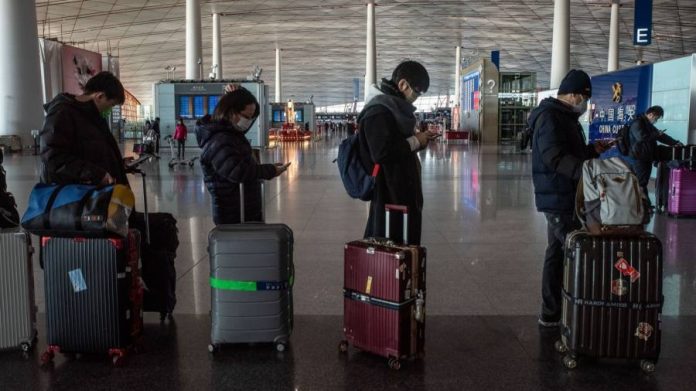 The split in Europe’s response to China’s coronavirus surge widened on Friday as Spain followed Italy by announcing new controls on travellers arriving from the Asian country even as the EU as a whole held back from such a move.

The Spanish government said it would demand proof of vaccination or a negative coronavirus test from people arriving from China, where tens of millions of people are being infected each day following the abrupt abandonment of its draconian zero-Covid policy.

Spain’s requirements are less stringent than Italy’s demand that all arrivals from China have a negative Covid-19 test. Madrid did not say when it would bring the measures into force but indicated they would come before January 8 when China will fully reopen its airports for international travel.

The unilateral responses revived memories of the chaotic days of March 2020, when the global spread of the virus became clear and national governments moved at drastically different speeds to impose border controls and national lockdowns. Spain and Italy were among the European countries hardest hit in the early months of the pandemic.

Explaining Spain’s decision, health minister Carolina Darias said: “There is concern about the evolution of infections in China and about the difficulty of assessing the situation given the scarce information currently available.”

On Thursday, the EU’s health and security committee, made up of member state officials, agreed that “co-ordination of national responses to serious cross-border threats to health is crucial”, but failed to endorse Italy’s call for the bloc to test all air arrivals from China.

Darias said that while Spain was committed to the “greatest possible” collaboration with other EU countries, it had decided not to wait for a bloc-wide response. “We are aware of the need to act with co-ordination, but also with speed,” she said, adding that the big worry was “that new and hitherto uncontrolled variants may appear”.

In a letter to the bloc’s health ministers seen by the Financial Times, Stella Kyriakides, European health commissioner, said there was “wide consensus that EU countries should act in a co-ordinated way if we want measures to be effective”.

But she called for “science-based” responses, such as surveillance of wastewater from airports, and said ministers should ensure they scaled up their gene sequencing programmes to detect any new variants of Covid.

“If a new variant of the Sars-Cov-2 virus appears — be it in China or in the EU — we must detect it early in order to be prepared to react fast,” she said. “Reliable epidemiological data or testing data for China are quite scarce” and “the general vaccination coverage in China is low”, Kyriakides warned.

The commissioner also noted that Chinese-made vaccines were not valid as proof of vaccination under the EU-wide system, although Darias said Spain would accept proof of inoculation with any product recognised by the World Health Organization. The WHO has approved widely used Chinese-made vaccines including those from Sinovac and Sinopharm.

The huge rise in Chinese infections and a rush of international travel bookings from the country have prompted the US to demand negative test results for new arrivals. Japan, India and Taiwan have also imposed testing requirements for people coming from the country.

The commission has already said that the BF.7 Omicron variant, prevalent in China, is already present in Europe.

The Market Doesn’t Like SoFi’s Accidentally Leaked Earnings Results. Is It a Buy?

News - June 26, 2022 0
It would have seemed impossible to the longhairs and freaks who inaugurated it in 1970, but the Glastonbury Festival has now taken its place...

News - November 4, 2022 0
A Moscow-installed official in the Kherson region has indicated Russian troops might pull back from the west bank of the Dnieper river, but as...

News - September 3, 2022 0
Wall Street analysts named a host of stocks this week that they said offer quality and huge upside as investors look to navigate an...
© 2022 Venture Current is a Flag Media LLC Publication. All Rights Reserved.
VC is part of the FLAG Token rewards network. Clients and partners can use FLAG Tokens for VC products and services.
VC runs 'Automatic' software. Stories posted here come from generic-topic Google news RSS feeds as well as client and partner-approved content.
If a story appears on this page that needs to be deleted due to licensing issues, please message us immediately so we can help you.