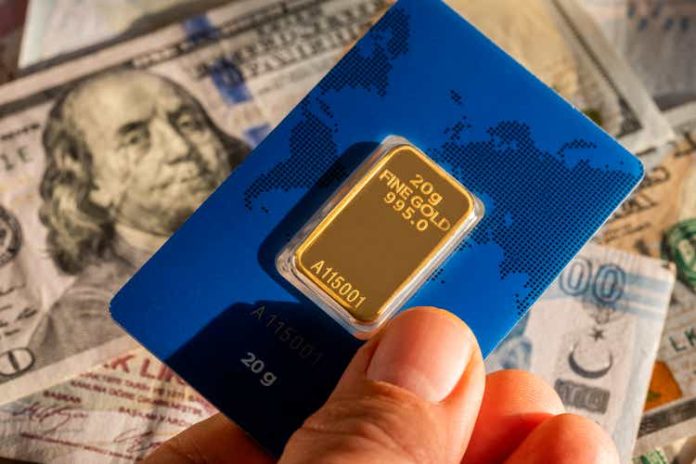 SPDR Gold Trust (NYSEARCA:GLD) is an Exchange Traded Fund (ETF) that is designed to track the price of spot gold (XAUUSD:CUR). It is traded on the stock market, and each share of GLD represents a fraction of an ounce of gold. GLD is backed by physical gold held in a trust, and investors buy and sell shares of GLD just like any other stock. This article examines the fundamental and technical factors that have the potential to ignite major gold rallies. The fundamental analysis will concentrate on the economic uncertainty in the United States of America (USA), the value of the U.S. dollar, and the technological advancements that have a significant impact on the gold market. Covid-19 has had a negative impact on the US economy, and its effects will be seen for the foreseeable future. Likewise, rising interest rates and inflation are extremely favorable for the gold market. The formation of a cup-and-handle pattern on the quarterly gold chart indicates that a breakout from $2,075 could lead gold prices to rally above $8,000 in the coming years.

The ongoing COVID-19 pandemic has caused widespread economic disruption, with many businesses shutting down and millions of people losing jobs. The recovery from the pandemic is uncertain, and it’s not clear how long it will take for the economy to fully recover. Similarly, there are ongoing trade tensions between several countries, including the USA and China, which create uncertainty for businesses and investors.

While the Covid-19 pandemic had significant effects on the U.S. economy, it has also caused inflation to reach record highs. The inflation in the USA is shown in the Consumer Price Index (CPI) chart below. The Federal Reserve (Fed) has raised interest rates to combat inflation but was only able to reduce a small portion of it. Instead of controlling inflation, higher interest rates have produced other problems in the economy. The chart illustrates the relationship between inflation and interest rates over the past seven decades. Clearly, when interest rates are increased, inflation begins to decline, but after a few months of interest rates peaks, the economy enters a recession. According to the 70-year chart, higher interest rates are bullish for gold investments because they induce economic uncertainty in the region. The interest rate peaks are marked by a red circle in the chart below. The 1970s and 1980s presented a situation of recession, whereby the gold price surged to much higher levels.

Since borrowing money is more expensive as a result of the increase in interest rates, the economy is experiencing a slowdown. Currently, mortgage rates in the USA are rising along with inflation as shown in the chart below. While higher interest rates have reduced CPI values, however, mortgage rates have decreased by more than 11% but still remain significantly higher than 2018’s level of 4.94%. The higher costs of borrowing money to invest in new projects in order to expand business operations are reducing investment and economic growth.

In addition, people are not spending money to buy homes due to the high cost of borrowing money. This hurts the housing market and the overall economy. The chart below presents the house price index for the USA which has been going higher with the inflation. However, there is a slight decline in the third quarter of 2022. The decline in the house price index is unnoticeable and prices are still high.

The price of gold is often denominated in U.S. dollars, so changes in the value of the dollar impact the price of gold. The value of a currency fluctuates for various reasons, the main ones being related to the country’s economic performance and monetary policy. On the basis of the aforementioned factors, the U.S. economy is in trouble, and as a result, the U.S. dollar is likely to weaken over time. The weakening of the US dollar increases the demand for gold.

The following chart depicts the quarterly outlook for the U.S. dollar, which has reached the long-term target and is expected to decline towards 88 and 92 levels. Due to economic uncertainty, the value of the dollar will decline over time. The chart also displays the RSI levels; when the RSI reaches 70, the dollar peaks and begins to decline. A detailed analysis of the US dollar Index is explained in the preceding article.

The rise of cryptocurrencies like Bitcoin led to an increased demand for gold as a store of value. Some investors view gold as a hedge against the volatility of cryptocurrencies and therefore invest in both. Blockchain is used in the development of gold-backed digital assets, which are essentially digital tokens that are backed by physical gold. This technology is making it easier for investors to buy, sell and store gold, which has increased the demand for gold. Another advancement in technology is tokenization. Tokenization allows to fractionalize of an asset such as gold into smaller units, thus making it more accessible and easier to trade, as a result, this led to a rise in the gold demand.

Another advancement in technology is e-commerce. The advancements in e-commerce and online platforms have made it easier for consumers to purchase gold from the comfort of own homes. This has led to an increase in the demand for gold, as it is now more accessible to the public. The development of technology has had a positive impact on the price of gold, and it is anticipated that this trend will continue.

Financial markets tend to repeat patterns due to the psychological and behavioral tendencies of market participants, as well as underlying economic and financial conditions. The patterns include stock market bubbles and crashes, and trends in interest rates. Additionally, technical analysis, which is the study of past market data primarily using charts, is based on the belief that market patterns tend to repeat themselves, and these patterns are used to predict future market movements. However, it’s important to keep in mind that past performance is not necessarily indicative of future results and that financial markets are highly unpredictable.

The gold market has been exhibiting the same patterns on long-term charts. The chart below depicts the quarterly gold market chart, which reveals the emergence of bull flags on a long-term basis. When the bull flag is broken, the price rises further. In 1977, the first bull flag was broken, causing the price to rise and produce a bubble on the chart, followed by a lengthy period of sideways movement. The second bull flag was broken in 2002, resulting in an excellent move to mark the 2011 peak. Then, the third bull flag was broken in 2018, and the price continues to rise. Recently, the price has consolidated between $1,680 and $2,075. The consolidation in gold price after the breakout from the bull flag is a bullish sign and increases the probability of a breakout higher. The boundary of this consolidation is $2,075 and a breakout from this level will initiate a massive rally to the upside.

The following chart measures the price target of the recent rally which was initiated after the breakout from the bull flag in 2018. The chart reveals that the price has been forming cups before moving higher. Each time the cup is broken, the price increases. It is observed that there is no pullback in price after the cup has been broken. To measure the gold recent rally’s target, the lowest price is taken from the bottom of the cup, where the rally began. The price increased by 743% from its lowest point of 1976, while it increased by 651% from its lowest point of 2001. The bottom of the most recent cup was in 2015, and if we calculate the average 700% increase in price from the bottom of 2015, we find that the price is projected towards $8,570. The formation of a cup from the lows of 2015 to the highs of 2021 reveals a handle that confirms a strong price action development. If the price breaks above $2,075, it will confirm the emergence of the cup and handle patterns, which is a very bullish development, and the price will move with a great deal of momentum.

Many investors view the $8,570 price objective as unrealistic, but based on the current economic uncertainty and technological advancements, it is highly probable. Consider the past, when gold’s price rise from $200 to $1,000, and you will see that $8,000 is not so unrealistic.

What Should Investors Do?

For so many years, the gold market has been bullish, and investors are taking advantage of the market’s large swings. Nonetheless, some short- and medium-term traders have exited the market due to extreme volatility and unpredictability. We accumulated gold positions at $1,680, which was regarded as the gold market’s turning point. However, some investors have missed the opportunity to enter the gold market. The question, therefore, is where one should invest. In fact, gold prices have already increased and are expected to continue to rise in the coming years. As discussed here, the pivot for the next rally is $2,075. If gold breaks $2,075, price momentum will increase and gold will move quickly so investors might miss the investing opportunity. Investors can buy the gold market during any short-term pullback. The short-term outlook is also bullish, with $1,920 and $2,000 as targets. According to the short-term outlook, gold is re-entering ascending broadening patterns, indicating that the price will move quickly to the $1,975 to $2,000 region. Consequently, any pullback in the gold market towards $1,800 to $1,850 must be viewed as a buying opportunity for investors. The gold market rally will not commence until the $2,075 pivot is broken.

In light of the preceding discussion, gold is regarded as the most secure investment during the current economic uncertainty. The increment in inflation is positive for the gold market. Based on the data, it can be concluded that higher interest rates are used to spark gold market rallies based on the past 70 years’ data. However, the impact of interest rates on gold prices is delayed by several months. On the other hand, the Covid-19 crisis has not yet been fully digested by the financial ecosystem, and its effects will be long-lasting. The higher interest rates also reduce economic activity by increasing the cost of borrowing money and mortgage rates. In addition to affecting business operations and economic growth, the higher mortgage rate has an effect on business operations. This economic uncertainty will have a negative impact on the US dollar, and as a result, the US dollar will decline. The weakening of the US dollar will further increase the demand for gold. Therefore, any pullback in spot gold should be viewed as a buying opportunity. Strong support exists between 1800 and 1850. Investors can use GLD as the best way to invest in the gold market due to high liquidity, convenience, low cost, diversification, and transparency.

Editor’s Note: This article covers one or more microcap stocks. Please be aware of the risks associated with these stocks.

News - August 24, 2021 0
Joe Biden, US president, ramped up pressure on employers to impose coronavirus vaccination requirements after the BioNTecb/Pfizer jab secured full authorisation from the Food...

Among Us VR announced at The Game Awards 2021

News - October 22, 2021 0
Wall Street threw open its doors to the crypto industry this week as the first US exchange traded bitcoin fund attracted more than $1bn...
© 2022 Venture Current is a Flag Media LLC Publication. All Rights Reserved.
VC is part of the FLAG Token rewards network. Clients and partners can use FLAG Tokens for VC products and services.
VC runs 'Automatic' software. Stories posted here come from generic-topic Google news RSS feeds as well as client and partner-approved content.
If a story appears on this page that needs to be deleted due to licensing issues, please message us immediately so we can help you.