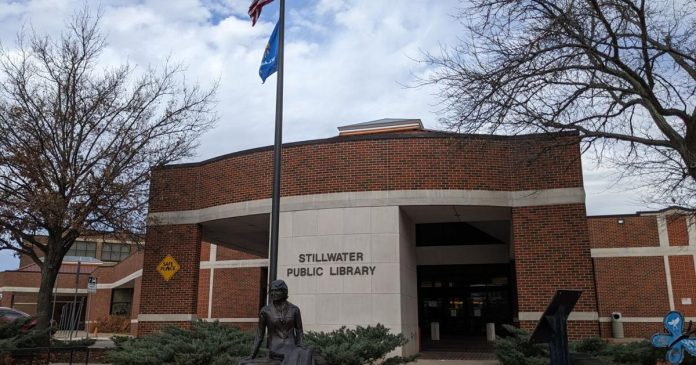 The library plans to celebrate throughout the year with Centennial Celebration events.

Although much has changed about the library in 100 years, much has remained the same.

From the formation of The Ladies Reading Circle (later, The Stillwater Browning Society) in 1892 to the pages of the Stillwater Woman’s Club meeting with notes scrawled in cursive next to names and dates, to today’s meetings held in air-conditioned rooms and StoryWalk for kids, the library represents what it always has – access to free resources that curate, educate and inspire a world of knowledge for individuals.

“At its core, the library provides the very same essentials now that it did 100 years ago,” Stillwater Public Library Director Stacy DeLano said.

Those essentials include things like free community access, reliable information, great stories and a warm and smiling welcome, she said.

They also include the formats in which reliable information and great stories come and instruction on using those formats.

“This is what we provide today and it is what Harriet Woodring (the first librarian hired by the city of Stillwater) provided in 1923—it is simply that the formats have so vastly changed,” DeLano said.

From its beginnings, SPL has been steeped in the love of literature, education and culture.

The society was based on the original Browning Society founded in London in 1881.

The 1881 Browning Society’s original intention was to read and study the works of Victorian poet Robert Browning, but the Stillwater branch soon expanded to include other literary genres and popular social issues of the day.

As Stillwater’s oldest organization, the society was responsible for helping to establish what would become the forerunner to the Stillwater Public Library.

Historians recorded several attempts at organizing a library in Stillwater.

• The Stillwater Browning Society established a “traveling library” that consisted of 20 cases of books.

• In 1895, the Congregational Church made over 300 volumes available to the public, according to a July edition of “The Populist,” Stillwater’s newspaper at the time.

• In 1898, the Stillwater Browning Society began a project called the Browning Public Library of Stillwater, which they founded and directed until 1901, when they transferred the project and funds to other sponsors.

• In a May 1900 edition of “The Payne County Populist,” the Y.M.C.A., which was in the process of opening and planning, announced plans to put in a “good and substantial library and reading room” for the public’s use.

• In June 1904, “The Stillwater Gazette” reported that a plan for a new library club was briefly discussed. Dues were one dollar for two years.

• “The Stillwater Advance” reported in April 1905 that the Grand Jury of the District Court of Payne County recommended that a library be maintained for the jail and that books should be solicited from local churches and societies.

• The Stillwater Browning Society and the Stillwater Woman’s Club both contributed to provide funds and donations for the library, DeLano said.

Then in 1922, the Stillwater Woman’s Club, the primary driver in raising funds for the library, opened a small library, charging dues of $1 per year. And on January 15, 1923, they opened the first official library in the former parsonage of the United Brethren Church.

In July 1923, Stillwater Mayor Holger appointed the first official library board, including members like Clarence Bullen, Rev. Allen Davis, Mrs. I.O. Diggs, Aurora Terwilliger and Pearl Good. The city hired Mrs. Harriet Woodring to be the first librarian, with a monthly salary of $25.

One of the first orders of business was the purchase of a new chair for the new librarian. A Miss Wright from the OAMC helped catalog the books.

When trying to measure the legacy of the Stillwater Public Library, one thing is clear, DeLano said.

“Ultimately, it’s the Stillwater community who has shaped what the library is today,” DeLano said. “(It’s) the families who use the library generation after generation, bringing their children and grandchildren to borrow books, read and attend programs.”

In addition, DeLano said those who work behind the scenes have made the library what it is today.

The volunteers, library and trust board members, organizations in Stillwater, professionals at OSU, Meridian Tech and other businesses, the library staff and directors, ongoing funding and expertise from the city of Stillwater, volunteers with the Friends of the Library and state and federal agencies are all responsible for shaping the current Stillwater Public Library.

The staff looks forward to celebrating with the community at upcoming events.

The first is a pop-up history exhibit at the History Museum at the Sheerar on Thursday, Feb. 23 at 5:30 p.m.

• An after-hours library lock-in for families on Friday, March 17. There will be board games, video games, movies, reading and s’mores in the outside fire pit (weather permitting).

• A “Haunted Library” in October.

• Behind the scenes, SPL is raising Centennial funding to grow the Stillwater Public Library Trust. The goal is to increase the endowment so that SPL can complete near-future dream projects and continue to provide excellent library services for the next 100 years.

For more information about this event and upcoming events, visit library.stillwater.org/100.

News - January 31, 2022 0
Microsoft has published guidance on the conditions that might lead to someone missing out on all-important Windows 10 and Windows 11 updates.As explained in...

US and allies urge North Korea to abandon nukes and missiles

News - August 15, 2022 0
United States lawmakers were set to meet Taiwan’s president days after China reacted to a similar visit by the US House speaker, Nancy Pelosi,...

News - March 1, 2022 0
Diplomats from mainly Western countries staged walkouts of two meetings when Russian Foreign Minister Sergei Lavrov began a remote address on Tuesday.Driving the news:...
© 2022 Venture Current is a Flag Media LLC Publication. All Rights Reserved.
VC is part of the FLAG Token rewards network. Clients and partners can use FLAG Tokens for VC products and services.
VC runs 'Automatic' software. Stories posted here come from generic-topic Google news RSS feeds as well as client and partner-approved content.
If a story appears on this page that needs to be deleted due to licensing issues, please message us immediately so we can help you.