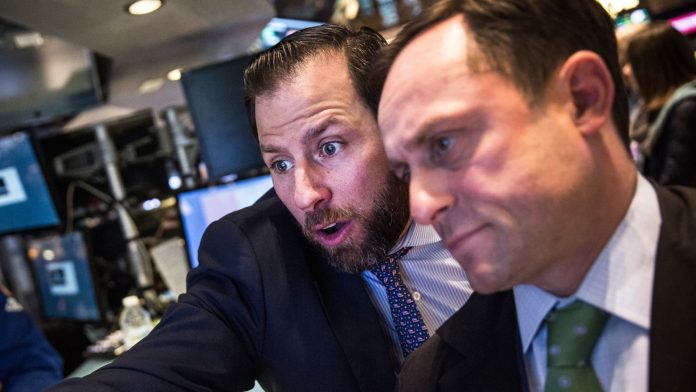 Traders work on the floor of the New York Stock Exchange.

Stock futures were down slightly Monday night as investors attempted to keep building on early 2023 momentum and looked ahead to more corporate earnings.

All three of the major indexes are up coming off a positive first two weeks of trading in the new year. The Nasdaq Composite is leading the way up 5.9%, as investors bought beat-up technology shares amid rising hopes of an improving landscape for growth stocks. The S&P 500 and Dow have advanced 4.2% and 3.5%, respectively, since the start of the year.

Gains have come on the back of the first crop of inflation-related data that investors saw as indicating a contracting economy, with hopes that will give the Federal Reserve justification to slow interest rate hikes once again. Last week, the consumer price index for December showed prices cooled 0.1% from the prior month, but prices were still 6.5% higher than the same month a year ago.

Investor focus now turns to corporate financials as earnings season kicks off. Banks took center stage Friday as investors digested comments about the likelihood of a recession. Goldman Sachs and Morgan Stanley are set to report before the bell Tuesday, followed by United Airlines after the market close.

“The economic data has been kind, to say the least, which is not something we were afforded for the vast majority of the year just gone,” said Craig Erlam, senior market analyst at OANDA. “The question now is whether earnings season will enhance that new sense of hope or spoil the party before it really gets going.”

Investors will also be closely watching for news out of the World Economic Forum’s summit in Davos taking place this week.

News - August 26, 2022 0
Tesla revealed more information about the company's Dojo microarchitecture at this year's Hot Chips 34. The company hopes to create an AI supercomputer to...

The Try Guys Drama Explained: Who is Ned Fulmer and What Did He Do?

French bishops react to report on sexual abuse of 216,000 children

News - May 13, 2022 0
Elon Musk’s tweet on Friday that he was putting his Twitter bid “on hold” highlighted the wild ride his proposed buyout has become, raising...

News - August 14, 2022 0
Salman Rushdie remains in critical condition but was able to speak after he was attacked during a literary event in the US, his son...
© 2022 Venture Current is a Flag Media LLC Publication. All Rights Reserved.
VC is part of the FLAG Token rewards network. Clients and partners can use FLAG Tokens for VC products and services.
VC runs 'Automatic' software. Stories posted here come from generic-topic Google news RSS feeds as well as client and partner-approved content.
If a story appears on this page that needs to be deleted due to licensing issues, please message us immediately so we can help you.