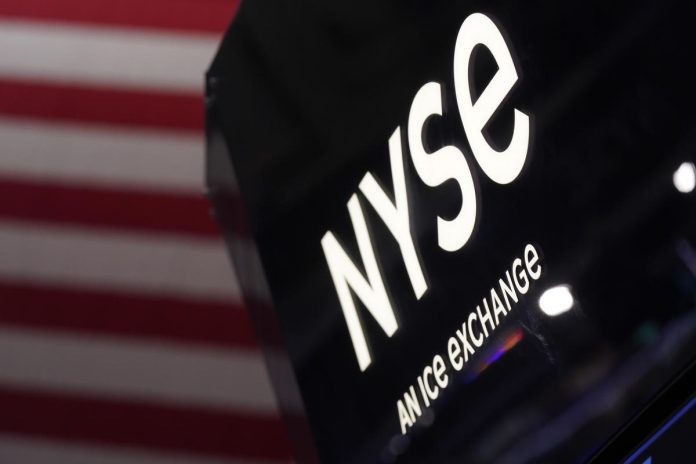 Stocks fell broadly in midday trading on Wall Street Wednesday as investors count down to the end of the worst year for the S&P 500 since 2008.

Investors are in the middle of a mostly quiet and holiday-shortened week. Markets were closed on Monday for the observed Christmas holiday and there are no major economic reports expected this week. Every major index is on track for sharp losses this year.

A report from the National Association of Realtors showed that the housing market continued cooling amid high prices and steeper interest. Pending home sales fell 4% in November.

Tesla rose 0.8% as it stabilized from steep losses it suffered after reports Tuesday that it temporarily suspended production at a factory in Shanghai.

The Chinese government announced late Tuesday that it will start issuing new passports, a major step away from anti-virus travel barriers that likely will bring a flood of tourists out of China for next month’s Lunar New Year holiday. China has already said it will drop most of its COVID-19 travel restrictions next month.

Markets in Europe were mostly lower.

Wall Street remains on edge and will likely continue dealing with volatile trading as the Federal Reserve continues its fight against stubbornly hot inflation. The Fed and other central banks have been raising interest rates to stifle borrowing and slow spending in order to tame inflation. The strategy, though, risks slowing the economy too much and bringing on a recession.

The Fed has already raised its key interest rate seven times this year and is expected to continue raising rates in 2023. The key lending rate, the federal funds rate, stands at a range of 4.25% to 4.5%, and Fed policymakers forecast that the rate will reach a range of 5% to 5.25% by the end of 2023. Their forecast doesn’t call for a rate cut before 2024.

Elaine Kurtenbach contributed to this report.

Taliban spokesman claims no proof bin Laden behind Sept. 11 terror attacks; ‘There is...

News - August 26, 2021 0
A Taliban spokesperson on Wednesday said no proof exists that implicates Usama bin Laden in the Sept. 11 terror attacks despite a mountain of...

Iran’s Khamenei blames US and Israel for street protests

News - October 3, 2022 0
Iran’s supreme leader Ayatollah Ali Khamenei has accused the US and Israel of masterminding anti-regime protests prompted by the death in police custody of...

News - January 31, 2022 0
Thailand has scrapped plans to impose a 15 per cent withholding tax on crypto transactions after facing pushback from traders in one of south-east...

News - July 24, 2022 0
China is preparing a system to sort US-listed Chinese companies into groups based on the sensitivity of the data they hold, in a potential...
© 2022 Venture Current is a Flag Media LLC Publication. All Rights Reserved.
VC is part of the FLAG Token rewards network. Clients and partners can use FLAG Tokens for VC products and services.
VC runs 'Automatic' software. Stories posted here come from generic-topic Google news RSS feeds as well as client and partner-approved content.
If a story appears on this page that needs to be deleted due to licensing issues, please message us immediately so we can help you.